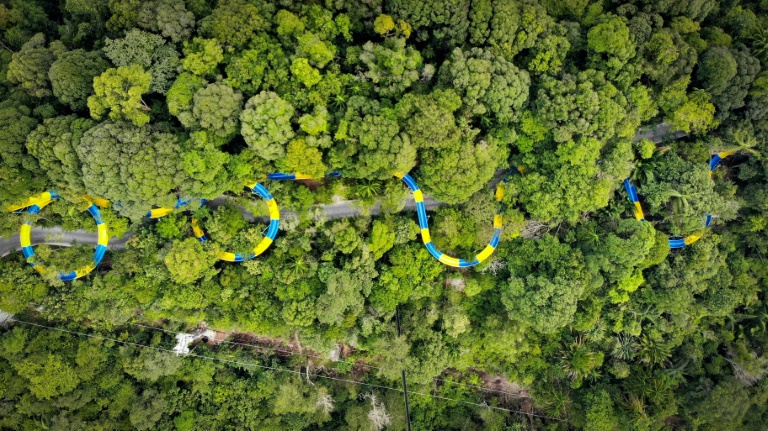 The Malaysian slide is three times longer than the previous record-holding chute in Germany. (Photo: AFP)

One of the world's longest water slides was unveiled in Malaysia Wednesday, a kilometre-long chute that starts on a hilltop before twisting and turning through dense jungle and splashing into a pool.

The blue and yellow chute at the ESCAPE theme park runs for 1,111 metres (3,645 feet) and has been awarded the Guinness World Record for the longest water slide where riders use an inflatable tube.

It is three times longer than the previous record-holding slide in Germany.

The watercourse in northern Penang state starts on a hill, at a height of some 70 metres (230 feet), with riders transported to the top by a specially constructed chairlift.

It takes four minutes to slide down the chute, which passes through a rainforest inhabited by exotic creatures, from birds to monkeys, before passing over a road and ending in the park.

"The idea of this water slide came about over frustration that most fun rides and water slides last merely a few seconds, and having the water slide start on a hilltop at a 70 metre elevation would make this ride last a good few minutes," said Sim Choo Kheng, boss of park operator Sim Leisure Group.

It is expected to open to the public next month.

China is home to an even bigger water slide, a 2,720 metre (8,900 foot) ride that winds down a hillside in Lishui. Guinness this month named it the world's longest mountain water slide.