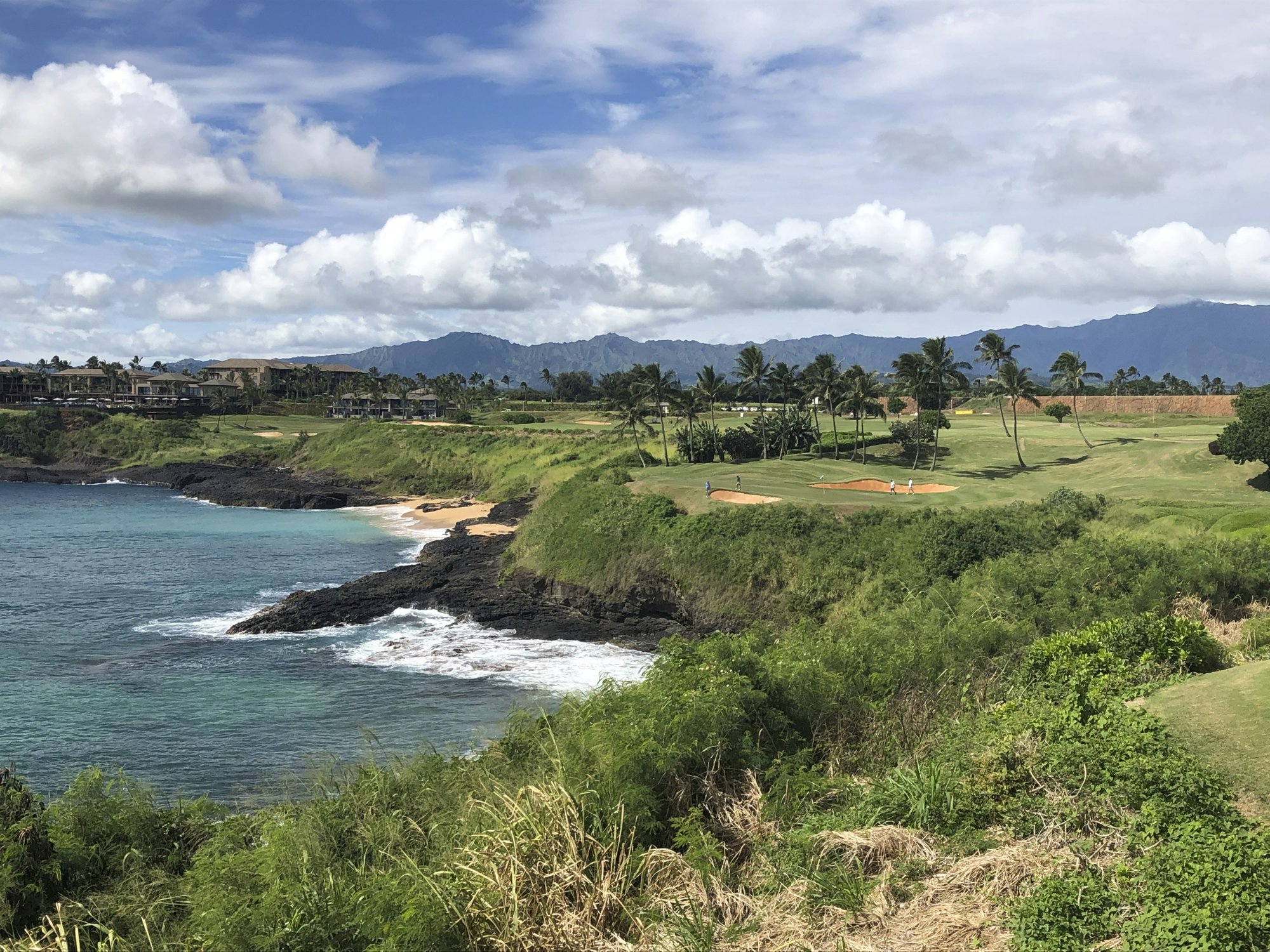 In this Nov. 15, 2018 photo, the 14th hole at the Hokuala Ocean Course in Lihue, Hawaii cuts across the Pacific Ocean on the east side of Kauai. (Photo: AP)

Hawaii has some of the most beautiful and memorable golf courses in the world. And the quiet island of Kauai may have the most picturesque courses on the islands — or anywhere else.

From Poipu Bay in the south, where Tiger Woods once reigned, to Princeville and the rainforests of the north, Kauai has become a must-play for golfers visiting the islands.

Kauai has nine courses on an island of about 67,000 people. Mount Waialeale, at the center of the island, is one of the wettest places on earth, so the courses are always green and in superb condition.

Because the island is small, the ocean is usually visible, even if it’s only in the distance, and some of the courses are set at the edges or cutting through rainforest.

The weather is almost always perfect, rarely getting above the low 80s. And while it does rain, the storms usually move through quickly, so it’s just a matter of taking cover for a few minutes before swinging away again.

Kauai also is at the northwest edge of the islands, so it’s remote enough that crowds are rarely a problem.

“There’s such a diversity of courses for such a small island,” Poipu Bay Golf Course general manager Craig Sasada said. “You get some really nice golf courses and the traffic is light. If you like a golfing vacation, this is a great place to come.”

Poipu Bay is the most well-known course on Kauai, thanks to a certain 15-time major winner. Poipu Bay hosted the PGA Grand Slam of Golf from 1994-2006, when Tigers Woods was at his prime and won there seven times.

The course is on the “dry” side of Kauai — 33 to 37 inches of rain annually — so the chances of a rain delay are less than the courses to the north.

Poipu Bay also has one of the most dramatic views anywhere at the par-5 16th hole, which follows the ocean along a massive cliff. It’s a popular spot even for non-golfers who hike up a heritage trail to take in the view.

So are the closing holes at the Hokuala Ocean Course, which has the islands’ longest continuous stretch of oceanfront holes.

The course winds inland through mango and guava forests before turning toward the ocean on the back nine. The par-4 13th hole plays directly toward the Pacific, kicking off a stretch of four straight ocean holes. The par-3 14th plays over an ocean inlet, and the 16th, after a detour through the Timbers resort, has what’s essentially an island green with waves crashing all around.

“The front nine has great views of the mountains and every hole is a little different,” Hokuala general manager Fran Roach said. “Two entirely different nines and you never get tired of playing it.”

Princeville Makai Golf Club has a similar vibe. The Makai Course is filled with dramatic views from high cliffs above the Pacific along Kauai’s north shore. It features six oceanfront holes, mountain views at every turn and creates a feeling of golf in paradise — which it is.

The sunset tour at Makai is worth the trip north on its own.

“We have beautiful views of the north shore of Kauai, which is arguably one of the most picturesque places in the world,” said Tom Freestone, head golf professional at Princeville Makai. “It is a spectacular golf experience.”

Puakea Golf Course, not far from the Lihue Airport, looks like it was plucked off the set of Jurassic Park.

That’s because it was.

The inland course has views of the ocean, but the most spectacular sights are the jagged mountains to the south. Those were used as the background for the original Jurassic Park movie, so it’s easy to imagine dinosaurs running across the fairway while you hit an approach shot.

“It’s a lot of fun to play and has some great views,” Puakea general manager Daniel Urwiler said.

For some local flavor, Wailua Golf Course in Kapaa is a favorite among Kauai islanders. The opening hole is so close to the ocean that players sometimes get hit with mist from crashing waves, and mountains are in constant view in the background. The back nine features several elevation changes, with coconut and pine trees all around.

HOW TO GET THERE: Several major cities have direct flights to Lihue Airport, including Seattle, Portland, San Francisco and Los Angeles. Lihue also is a short flight from Honolulu and Kahului, Maui.