Smooth sailing so far on $7.5M makeover of Pilgrim ship 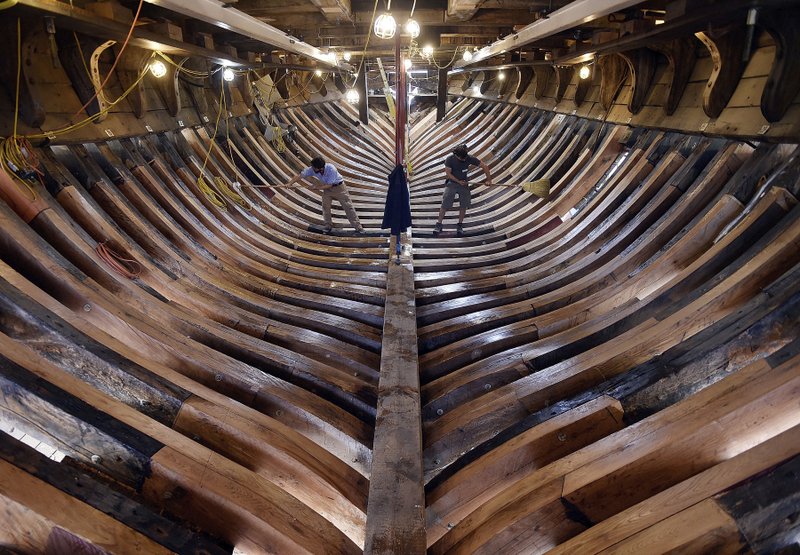 A year after craftsmen embarked on an ambitious effort to restore the rotting replica of the ship that carried the Pilgrims to the New World in 1620, the work “is going really great,” project manager Whit Perry says.

Britain built the vessel and sailed it to the U.S. as a gift of friendship in 1957. Usually it’s moored in Plymouth Harbor, where more than 25 million visitors have boarded it over the past six decades. But over the years, the elements, aquatic organisms and insects took their toll.

It’s now in dry dock at the Henry B. duPont Preservation Shipyard at Connecticut’s Mystic Seaport, getting a $7.5 million makeover in time for 2020 festivities marking the 400th anniversary of the Pilgrim landing.

The Associated Press caught up with Perry, director of maritime preservation and operations at Plimoth Plantation , for a progress report.

Perry: Not really. I couldn’t be more pleased with the progress we’re making right now. We’ve had some major milestones since we began on Nov. 3, 2016. We have more than 100 new frames and floor timbers inside in the hold. Now we’re actually going to start the planking process on the outside of the ship, which is very exciting.

AP: So nothing’s bugging you? This time last year, on top of water damage and dry rot, you had beetles chewing through the bottom of the boat.

Perry: Ah, yes, the wharf borer beetle. No, that’s been a minor issue. We did find evidence of (Teredo worms). This is a mollusk that can grow up to three feet long and eats through wood. On the bottom of the keel, there’s something called a “worm shoe” — a 4-inch-thick piece of wood that runs the whole length of the ship. It lets the worms have a field day but not get into the main structure of the boat. That’s where we found evidence of worms. The ship itself is OK.

AP: The shipyard’s live webcam is pretty cool, but it’s hard to tell how many people are involved and what they’re doing. Can you tell us what we can’t see?Perry: There are 20 people working on the Mayflower II at any one time. They’re working regular shifts, but we’re paying a little overtime so they don’t feel like they have to put down their tools if they’re in the middle of something. There are small teams working all over the ship. As we take things apart, we’re fixing anything with a question mark now, while we have the chance.

AP: Sea water actually preserves a wooden ship like this one. What happens when it’s on dry land for so long? Is that bad for a boat?

Perry: It can be. We’re very proactive in spraying the boat with salt water and an antifungal agent. As we put the ship back together, we try to keep the humidity up with misters so it doesn’t dry out too much. We also have to leave a little play on the new planking beneath the waterline so it doesn’t buckle when the ship returns to the water and the wood starts to swell. It’s not an exact science.

AP: In 2020, the eyes of the world will be on Plymouth. Sounds like you’re confident the ship will be ready?

Perry: It’s all going really great. We’re on budget and we’re on schedule. The ship will leave Mystic Seaport by late spring or early summer of 2019. And I’ve got to say, sailing the Mayflower II back to Plymouth is going to be quite a spectacle. Seeing the ship back under sail is going to be a beautiful sight.