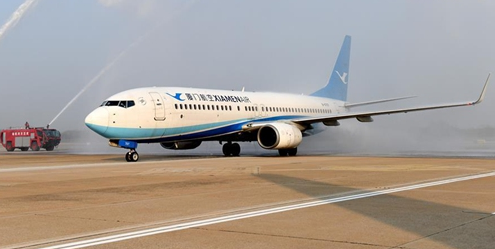 Flight MF8095 of the Xiamen Airlines is welcomed at the Tianhe Airport in Wuhan, capital of central China's Hubei Province, April 8, 2020. Flight MF8095 from Hangzhou, capital of east China's Zhejiang Province, was the first flight arriving in Wuhan after it lifted outbound travel restrictions on Wednesday. (Photo: Xinhua)

For frequent business and tourism flyers, who have longed to start traveling again - a lifestyle choice increasingly popular among Chinese people - there's been nothing more annoying than the coronavirus outbreak.

The global aviation standstill, a byproduct of the Covid-19 pandemic, has eased, in Southwest China in particular, thanks to the nation's swift and effective response to contain the contagion, a GT Source investigation has found, increasing optimism for China, which has now unseated the US as the world's top aviation market by seats.

China's civil aviation industry accelerated its recovery after the May Day holiday, as economic activity rebounded after the disease is largely brought under control in the country. Southwest China's Chongqing and Sichuan's Chengdu airports are taking the lead.

Chengdu Shuangliu International Airport conducted 5,972 flights from May 11-17, up from the February 3 week's 2,950, the first week after the Chinese Lunar New Year holiday, according to VariFlight.

Tian Yun, vice director of the Beijing Economic Operation Association, told the Global Times on Wednesday that the comparison indicated that Southwest China's labor market has recovered faster, with many workers flying to South and East China.

Data from the National Bureau of Statistics showed that the country's economy continued its recovery in April and May, with major indexes showing positive change. That was especially true of industrial value-added, which turned to expansion territory of 3.9 percent from a contraction of 1.1 percent in the previous month.

More convincingly, the country's industry watchdog portrayed an economy largely in full swing now. Major industrial firms recorded an average reopening rate of 99.1 percent across the country, while 95.4 percent of their employees had resumed work as of Monday.

Along with the gradual recovery of economic and social activity, the domestic civil aviation industry has continued to rebound this month. On May 15 alone, the number of civilian flights exceeded 10,000 for the first time since February 21, recovering to 60 percent of the pre-COVID-19 level, VariFlight data showed.

Lan Xiang, vice president of domestic online travel app Qunar, said that with the rise in travel and business trips, tickets from Chengdu to Shenzhen and from Guangzhou to Chongqing sold on the platform in May outnumbered the corresponding period last year.

After Beijing lowered its emergency alert level on April 30, the number of flights between the city and Shanghai grew 57.3 percent on a weekly basis last week, according to VariFlight. The numbers are apparently indicative of the nation's fast-track rebound as an aviation powerhouse.

China has officially become the largest aviation market globally, CAPA, a global market intelligence provider for the aviation and travel sector, said in an announcement in mid-April.

"The International Air Transport Association (IATA) had predicted the change would occur in 2024; however the impact of the COVID-19 virus on aviation markets - and China's bounce back - brought forward this major turning point," according to the announcement.

Meanwhile, freight transport also recovered somewhat as the COVID-19 ebbed. Domestic freight transport dropped 19.4 percent year-on-year to 484,000 tons in April, narrowing 3.9 percentage points on a monthly basis, Xiong Jie, an official with the Civil Aviation Administration of China (CAAC), said at a press briefing on May 13.

In particular, Shenzhen Baoan International Airport reported freight throughout of 106,300 tons in April, up 4 percent year-on-year, according to the airport's April financial preview released on Tuesday.

The trend was also evident in the capital markets. Airport and shipping shares took a battering from surging COVID-19 infections outside of China. They nonetheless rebounded from the tumble since April, an indication of the gradual resumption of economic activity.

In one sign, Shanghai-listed Guangzhou Baiyun International Airport Co edged up 0.13 percent to 15.19 yuan ($2.14) on Wednesday. Its shares have recovered 22.01 percent since the close on April 2, when the airport stock hit its lowest for the year.

However, VariFlight said that there is a long way to go before China's aviation industry fully recovers, and there's still uncertainty for international flights.