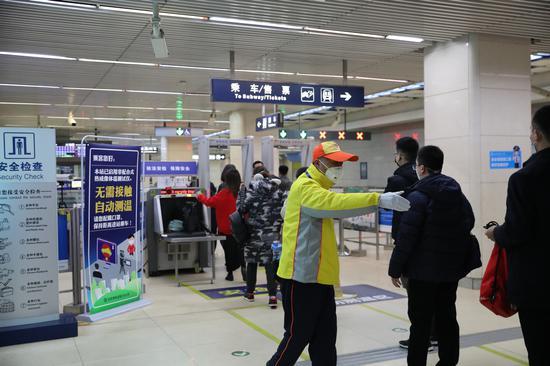 A worker guides passengers to line up for security check in a subway station, March 9, 2020. (Photo/Xinhua)

Beijing will carry out strict travel restrictions to curb the spread of COVID-19 and people at high risk are forbidden to leave the city, a Beijing official said at a news conference on Thursday morning.

Measures will be taken to strengthen inspection and control of different modes of transportation, such as civil aviation, railways and highways, said Pan Xuhong, deputy director of the Beijing Municipal Public Security Bureau.

People at high risk, including confirmed cases, suspected cases, close contacts and those with infections with no symptoms, will be limited to buying airline or train tickets, Pan said.

These include those who have a fever, who visited Xinfadi market since May 30, who have close contacts with market personnel and who live in medium- and high-risk areas, according to Pan.

Others should adhere to the principle of "not leaving Beijing under unnecessary conditions." Those who really need to leave Beijing have to provide a negative nucleic acid test report within seven days, he said.

The civil aviation and railway sectors will check temperatures and the negative nucleic acid test reports of outbound passengers before boarding.

Tickets for flights and trains in and out of Beijing bought before midnight Tuesday can be changed or refunded free of charge.

Vehicles going outside Beijing will be inspected and occupants checked for negative nucleic acid test reports at security inspection stations and checkpoints on the city's highways.

Beijing is strengthening information sharing with other provinces, regions and cities, and is fortifying the joint prevention and control mechanism to ensure the traceability and control of personnel at risk.