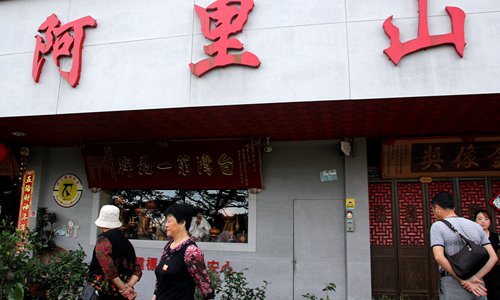 Tourists stand in front of a store in Taiwan. (File photo: IC)

A pilot program that allowed residents from 47 cities on the Chinese mainland to visit Taiwan as individual tourists was suspended from Thursday. Industry insiders said the travel industry in Taiwan will suffer huge losses as a result.

The decision was made in light of current cross-Straits relations, said the mainland-based Association for Tourism Exchange across the Taiwan Straits, according to the notice by the association that was posted on the website of the Ministry of Cultureand Tourism.

"The move will cause huge losses to the travel industry in the island of Taiwan, which is 40 percent dependent on the mainland, using a conservative estimation," an industry insider told the Global Times on Thursday on condition of anonymity. "In terms of proportion, individual tourists and group tourists are half and half."

The pilot program was launched in 2011 as a positive measure to expand exchanges across the Taiwan Straits in the context of the peaceful development of cross-Straits relations, said Ma Xiaoguang, spokesperson of the Taiwan Affairs Office of the State Council, during a press conference on Thursday.

"The actions of the Democratic Progressive Party, which promotes Taiwan secession, incites hostility toward the mainland and provokes confrontation between the two sides and has seriously undermined the basis of the trial run," said Ma.

Some 2.7 million mainland tourists visited Taiwan in 2018, the lowest number in six years, according to the office of transportation and communications of Taiwan. Shops across Taiwan Province have seen a sharp drop in revenue since 2016 as a result of fewer mainland tourists, and many full-time tour guides have switched to other businesses, Taiwan media outlets have reported.

After the notice, some travel agencies have stopped to offer individual travel services to Taiwan. Global Times reporter on Thursday found that travel platforms such as CAISSA Tourism Group's website has shown no results when consumers search individual travels to Taiwan.

"Tourist numbers will continue decreasing and local Taiwan GDP could drop 0.2-0.3 percentage points because of the reduced mainland tourists," said the insider. "Not only travel agencies will struggle, but also related industries such as airlines, catering services and the lodging industry."

"Customers are angry about DPP leader Tsai Ing-wen's purchase of US arms using money from mainland tourists and they have been demanding refunds of airplane tickets and accommodation costs," a salesperson surnamed Su from Beijing-based Heping World International Travel Service told the Global Times on Thursday. "After the notice, almost all individual travelers decided not to visit Taiwan, even in travel groups, which have not been suspended."

"I just arrived in Taiwan today and I already heard people complaining 'business is going to die'," Xue Qingde, a Taiwan businessman who has been investing in the Chinese mainland, told the Global Times on Thursday.

"Yes, we do have mounting concerns over the reduced travelers from the Chinese mainland because half of our customers traveled as individual tourists," an employee of the Taipei-based travel agency South East Travel Service Corp told the Global Times on Thursday.

"We have seen the notice and we are closely observing the impact," a staff at another agency, Right One Travel, based in Taipei told the Global Times on Thursday.