Pan Lili, a community worker in China's Suihua City, Heilongjiang Province, is working through her National Day holiday from Oct. 1 to 7. 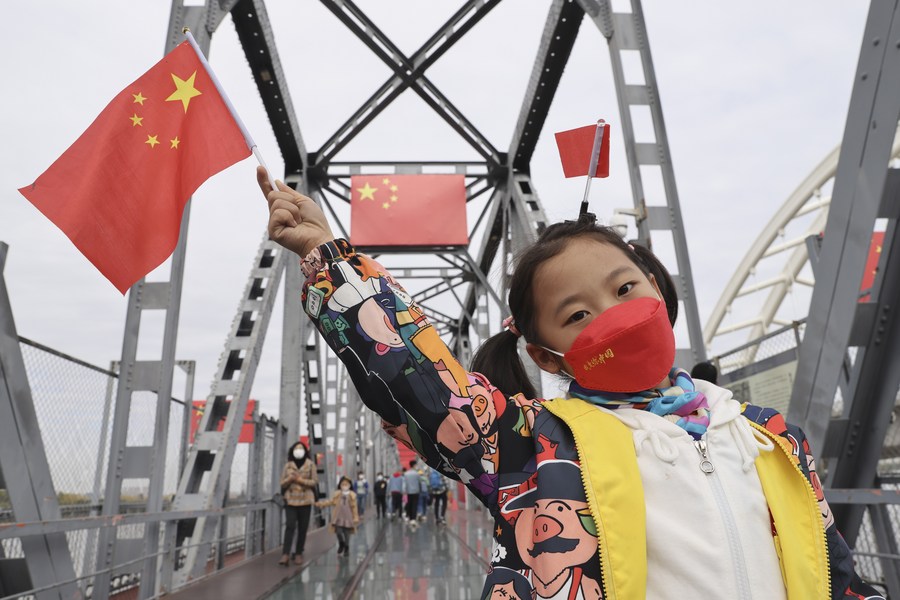 A child waves the Chinese national flag while posing for photos on a bridge in Harbin, northeast China's Heilongjiang Province, Oct. 2, 2021. (Photo: Xinhua)

Northeast China's Heilongjiang Province has recently seen another COVID-19 outbreak. On Sept. 21, the provincial capital Harbin reported its first recent case of COVID-19, which was subsequently identified as the Delta variant.

By Saturday, there were 83 local cases in Heilongjiang Province, the provincial health commission said.

Community workers like Pan Lili are among the frontline staff battling the spread. Pan is responsible for assisting in epidemiological investigations, distributing materials for home-quarantined residents, and organizing nucleic acid testing.

"At first, I felt fear and panic when the epidemic broke out. Now, with enough experience, I can handle it with great calm," Pan said.

Cui Hongping, a nurse who also lives in Suihua City, is also working through the holiday. She and her team are responsible for Suihua's citywide nucleic acid testing campaign. The 100-member team has tested approximately 30,000 people in the course of each campaign.

Though Cui's allergies caused her hands to rupture and swell with the frequent application of hand sanitizer at work, she did not lose her focus. She put on gloves and kept working.

"My job as a nurse requires me to work to keep the people healthy and safe," she said.

In Bayan County, Suihua City, and other regions of Heilongjiang Province that have been impacted by this outbreak, many medical workers, traffic police and volunteers are working through the holiday. Their efforts have helped control the outbreak to a limited scope.

Through targeted COVID-19 containment measures, most Chinese people, including those in Heilongjiang Province, are able to enjoy a safe and jubilant National Day holiday.

Some 16 million passenger trips were made by rail on Friday, the first day of the weeklong holiday, and 127 million trips are expected to be made over the full course the holiday, according to China State Railway Group Co., Ltd.

On Shanghai's Bund, a "zipper" wall of police has appeared again. Due to the large number of tourists, police formed a human wall, diverting tourist flows with a traffic light system to prevent the dangers that can occur in crowds.