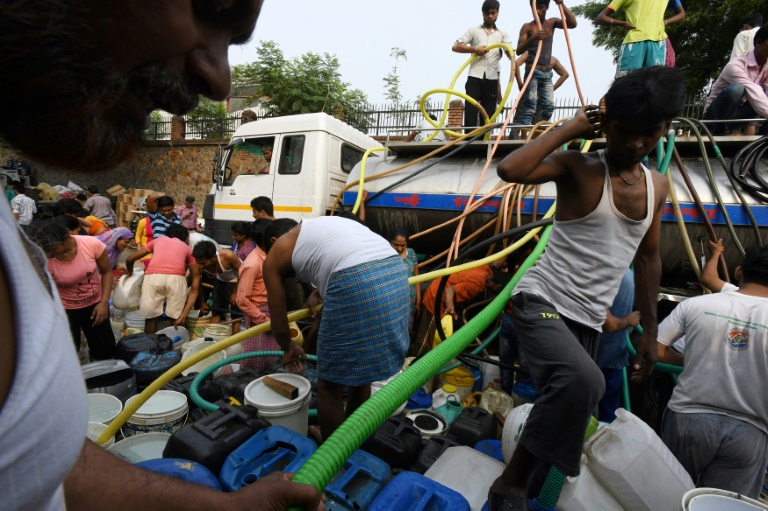 For many in Delhi, the daily water run is a mad and sometimes dangerous scramble.(Photo:AFP)

When the water truck finally chugged into the Delhi slum, there was a stampede. It is a scene repeated daily across India as temperatures rise and the vital resource gets ever scarcer.

Young men clambered onto the roof and jammed a tangle of multicoloured hosepipes inside, passing the other ends to friends waiting with containers in the shouting crowd below.

All 10,000 litres were gone in minutes, lugged away in jerry cans and buckets dangling on bike handlebars. As the lorry left, people ran after it, desperate for any last drops.

"It's a real battle, every man for himself," Raj Kumari, one of dozens of people in the Sanjay Camp slum who wait hours for this brutal daily ritual, told AFP.

"There are fights and arguments, even injuries," the young woman said. "We have to get (our containers) filled even if someone gets crushed or loses an arm or leg."

No one was hurt this time but injuries are common and anger is growing at the authorities.

Earlier this year a 60-year-old man and his student son died in the capital after scuffles over a water tanker, reports said, prompting protests by hundreds of angry locals.

Elsewhere, scores of people in the northern city of Jammu this week blocked an express train to Delhi in a protest against water shortages.

And in the Himalayan hill resort of Shimla, the former summer capital of the British Raj, residents staged street demonstrations after water ran out.

- Ever hotter, ever thirstier -

Summer temperatures in parts of India are currently passing 45 degrees Celsius (113 degrees Fahrenheit) and data show that the country of 1.25 billion people is getting hotter.

A 2017 study by the Indian Institute of Science said that the frequency and magnitude of heatwaves accompanied with drought had increased over the past three decades.

The India Meteorological Department said in 2017 that 2016 was the warmest year since 1901. India's top five hottest years have been recorded in the last 15 years.

Several million people rely on daily visits by tankers and on bore wells for their daily needs. The supply from pipes is puny, irregular and often filthy.

Millions of farmers are almost entirely dependent on monsoon rains for irrigation. Water levels in some key reservoirs have plummeted in recent years, particularly during long summers.

Experts blame the shortages not just on the changing climate but also on inadequate planning, especially in India's fast-growing cities whose aged infrastructure cannot cope.

Studies by the United Nations and other groups have warned that the country's water crisis will worsen unless action is taken.

Back in the Delhi slum, 29-year-old labourer Yogendra Kumar said, "We spend around four hours on most days doing this."

"Most people get enough supplies to last a few hours. They will start queueing again around 2:00 pm, for the same routine," he added.

"There are days when families don't get water. You have to save some water to use on the days when you don't get any," added fellow resident Shashi Kumar Singh.