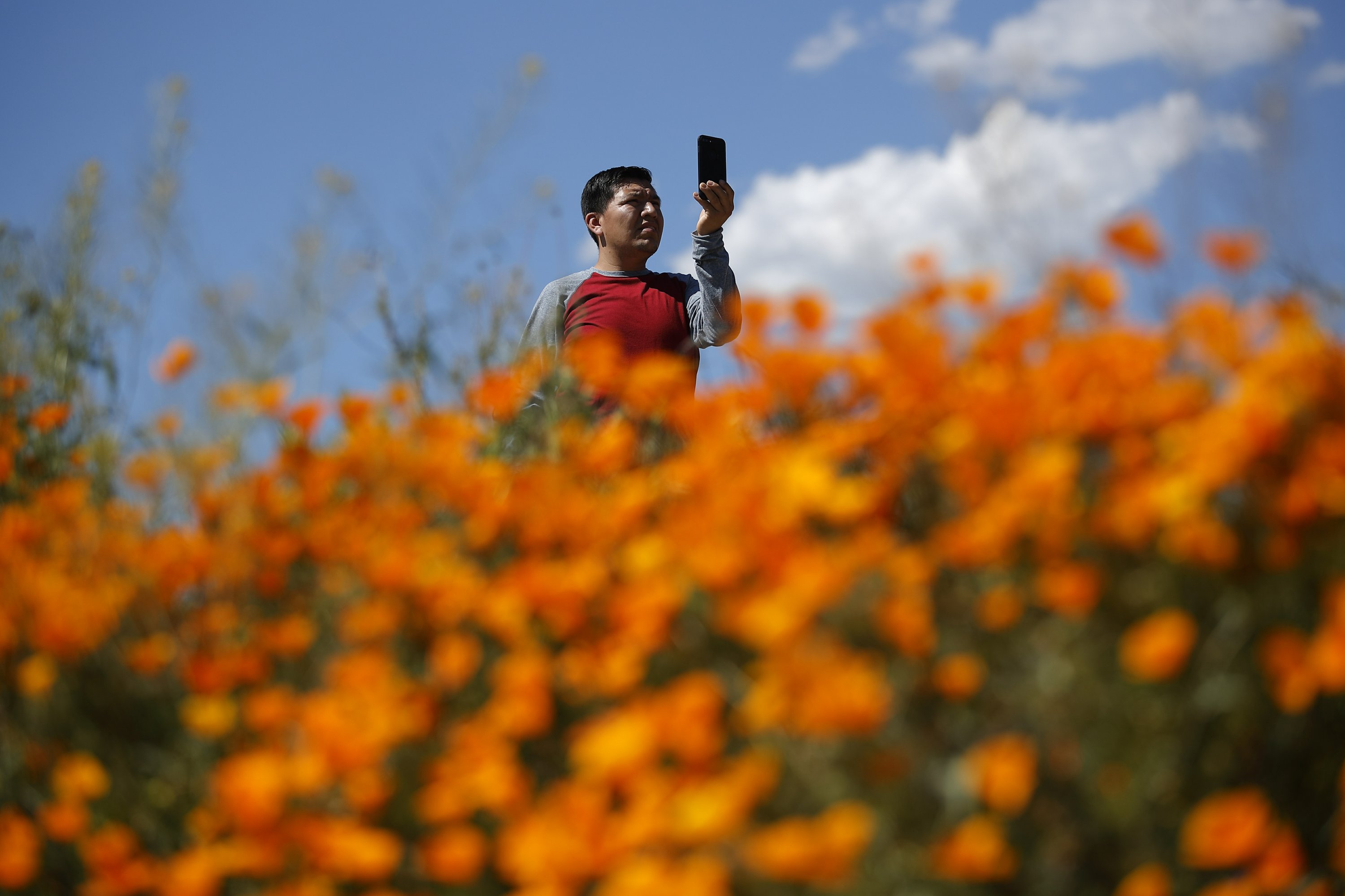 Like Dorothy in the “Wizard of Oz,” the Southern California city of Lake Elsinore is being overwhelmed by the power of the poppies.

About 150,000 people over the weekend flocked to see this year’s rain-fed flaming orange patches of poppies lighting up the hillsides near the city of about 60,000 residents, about a 90-minute drive from either San Diego or Los Angeles.

Interstate 15 was a parking lot. People fainted in the heat; a dog romping through the fields was bitten by a rattlesnake.

A vibrant field of poppies lures Dorothy into a trap in the “Wizard of Oz” when the wicked witch, acknowledging that no one can resist their beauty, poisons the wildflowers and she slips into a fatal slumber until the good witch reverses the spell.

Lake Elsinore had tried to prepare for the crush of people drawn by the super bloom, a rare occurrence that usually happens about once a decade because it requires a wet winter and warm temperatures that stay above freezing.

It offered a free shuttle service to the top viewing spots, but it wasn’t enough.

Sunday traffic got so bad that Lake Elsinore officials requested law enforcement assistance from neighboring jurisdictions. At one point, the city pulled down the curtain and closed access to poppy-blanketed Walker Canyon.

“It was insane, absolutely insane,” said Mayor Steve Manos, who described it as a “poppy apocalypse.”

By Monday the #poppyshutdown announced by the city on Twitter was over and the road to the canyon was re-opened.

And people were streaming in again.

Young and old visitors to the Lake Elsinore area seemed equally enchanted as they snapped selfies against the natural carpet of iridescent orange.

Some contacted friends and family on video calls so they could share the beauty in real time. Artists propped canvasses on the side of the trail to paint the super bloom, while drones buzzed overhead.

Patty Bishop, 48, of nearby Lake Forest, was on her second visit. The native Californian had never seen such an explosion of color from the state flower. She battled traffic Sunday but that didn’t deter her from going back Monday for another look. She got there at sunrise and stayed for hours.

“There’s been so many in just one area,” she said. “I think that’s probably the main reason why I’m out here personally is because it’s so beautiful.”

Stephen Kim and his girlfriend got to Lake Elsinore even before sunrise Sunday to beat the crowds but there were already hundreds of people.

The two wedding photographers hiked on the designated trails with an engaged couple to do a photo shoot with the flowers in the background, but they were upset to see so many people going off-trail and so much garbage. They picked up as many discarded water bottles as they could carry.

“You see this beautiful pristine photo of nature but then you look to the left and there’s plastic Starbucks cups and water bottles on the trail and selfie sticks and people having road rage because some people were walking slower,” said Kim, 24, of Carlsbad.

Andy Macuga, honorary mayor of the desert town of Borrego Springs, another wildflower hotspot, said he feels for Lake Elsinore.

In 2017, a rain-fed super bloom brought in more than a half-million visitors to the town of 3,500. Restaurants ran out of food. Gas stations ran out of fuel. Traffic backed up on a single road for 20 miles (32 kilometers).

The city is again experiencing a super bloom.

The crowds are back. Hotels are full. More than 6,000 people on a recent Saturday stopped at the visitor’s center at the Anza-Borrego Desert State Park, California’s largest park with 1,000 square miles (2,590 sq. kilometers).

But it helps that the masses of blooms are appearing in several different areas this time, and some sections are fading, while others are lighting up with flowers, helping to disperse the crowds a bit.

Most importantly, Macuga said, the town’s businesses prepared this time as if a major storm was about to hit. His restaurant, Carlee’s, is averaging more than 550 meals a day, compared to 300 on a normal March day.

“We were completely caught off guard in 2017 because it was the first time that we had had a flower season like this with social media,” he said. “It helps now knowing what’s coming.”