The coolest getaway in wintertime tourism

Sun, beaches and palm trees aren’t the only travel allure in wintertime. For those willing to brave the elements for a truly magical getaway, Harbin in northeastern China is the place to head. 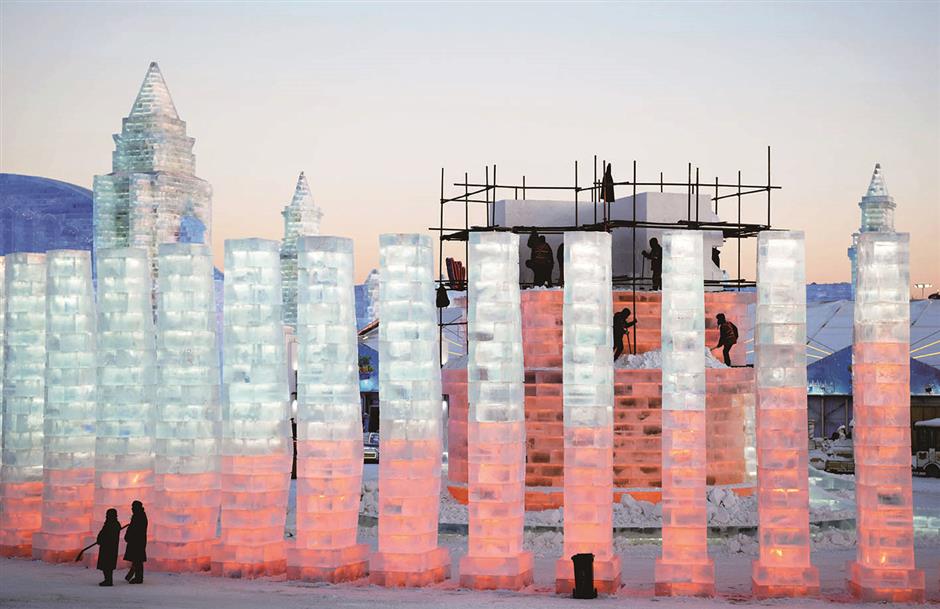 Full-size buildings made of ice blocks rise in Ice and Snow World.

The 35th Harbin International Ice and Snow Sculpture FestivaI, which officially begins on January 5, is the largest event of its kind in the world. As the temperature drops below freezing, a whirl of activities heats up to entertain the millions of visitors who descend on the capital of Heilongjiang Province to enjoy a winter wonderland.

The main highlight of the festival is Ice and Snow World, a magical theme park of life-size buildings made of ice. It’s especially dazzling at night when the whole area is flooded with colored lights reflecting off the ice.

The park is open from year-end to early spring, depending on the weather. It is celebrating its 20th anniversary this year with more attractions than ever.

The solidly frozen Songhua River in Harbin provides an endless source of ice for frozen architecture. To mark the 20th anniversary, past popular ice sculptures will be recreated, alongside new works that are expected to become the icons of the future.

One new work is the Century Light Tower. Some 20 layers of ice are piled to create the highest sculpture in the park. With a colorful light shining on the tower, it looks like a spacecraft about to be launched.

Another new sculpture is an ice replica of St. Nicholas Cathedral, built in Harbin in 1900 in the Russian Orthodox style of the St Nichols Naval Cathedral erected in St. Petersburg in the mid-1700s. The original building was dismantled during the Cultural Revolution (1966-76) and later rebuilt as a gallery in 2006 in a new location.

The building highlights the mixed cultural heritage of Harbin, a city close to the Russian border. 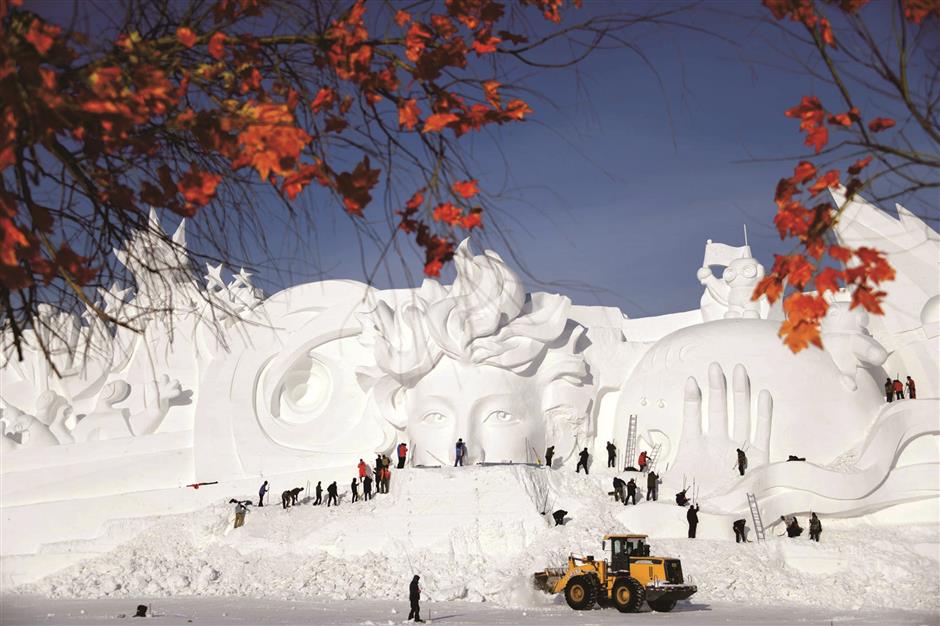 Artists brave the cold as they construct their entries in the annual snow sculpture competition in Harbin.

The ice park also features the Castle of True Love, a Disneyesque structure. The park says the sculpture is expected to become a perfect “dating spot” for couples and a mass wedding will be held there on Valentine’s Day in February.

The largest sculpture in the park is a Buddha statue in typical Chinese style, with a lotus seat, staircases and pagodas around it. It required more than 4,500 cubic meters of ice and took the longest to finish.

Poppy Liu, a Harbin native, says visitors usually had to wait for more than an hour to get on the slide. This year, there are six slideways – three more than before – so the waiting time should be reduced.

“I remember when I went down the slide for the first time,” Liu said. “I was numb with cold, but the experience was quite stress-relieving. It was a little bit like the slides you find in water parks but much longer.”

Another highlight of the festival and a perfect daytime excursion is the Snow Sculpture Art Fair, where dozens of artists from around the world compete to create the best snow sculptures

Organizers say snowfall in Harbin has been lighter than usual, necessitating the making of artificial snow since late November.

The fair had its soft opening last week, with some works still in progress. That gives visitors a chance to see how artists turn piles of soft snow into grand sculptures that don’t fall apart. 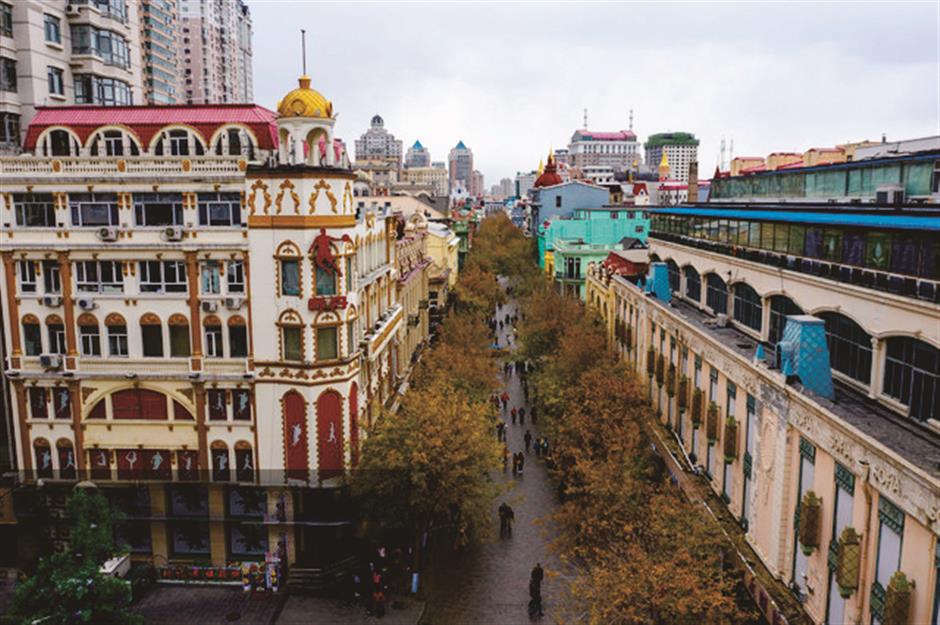 Zhaolin Park, another site worth a visit, is tailored to children, with ice sculptures of animals and magical figures beloved by youngsters. The park also features an ice lantern fair.

Visitors to Harbin are advised to bundle up if they visit this winter wonderland. The temperature in the city can drop to 20 to 30 degrees below zero Celsius after sunset.

Scarves, gloves and hats are sold at the tourist sites, but layers of clothing and a thick coat are still prudent for people not used to extreme cold.

There are direct flights from Shanghai to Harbin. Both Ice and Snow World and the Snow Sculpture Art Fair are on Sun Island, or Taiyang Island, which is several kilometers away from downtown Harbin.

A shuttle bus runs from Wanda Mall, a shopping center in Harbin, to the two tourist highlights between 8am and 5pm. The shopping center is about 30 minutes’ ride from Harbin Taiping International Airport.

Those who want to visit in the evening can take a shuttle bus from Central Avenue, a landmark in downtown Harbin. The avenue is about an hour’s ride from Taiping airport.

Tips: Warm clothes such as thermal underwear, gloves, scarves, earmuffs, hats, thick arctic clothing and ski boots are necessary. Wear sunglasses or snow glasses to prevent snow blindness. It’s very dry in Harbin despite the cold, so make sure to drink a lot of water. Bring extra camera and phone batteries with you as the cold can snap batteries too. Keep the batteries warm can also help.

A look around Harbin

Central Avenue is the longest pedestrian street in China and looks like somewhere out of Europe at first sight.

The street was called Chinese Avenue when it was first built in 1898. At the time, Harbin was “on loan” to tsarist Russia by the Qing Dynasty (1644-1911) to build a railway, and the street housed Chinese workers.

The current avenue was designed by a Russian architect in 1924, and four years later it was renamed Central Avenue.

The street is home to 71 buildings in Baroque, Renaissance and other eclectic styles. It has the appearance of the Bund area in Shanghai.

Today it is the most popular commercial zone in Harbin. Several landmarks, including Modern Hotel and Education Bookstore, are recommended in every guide book. 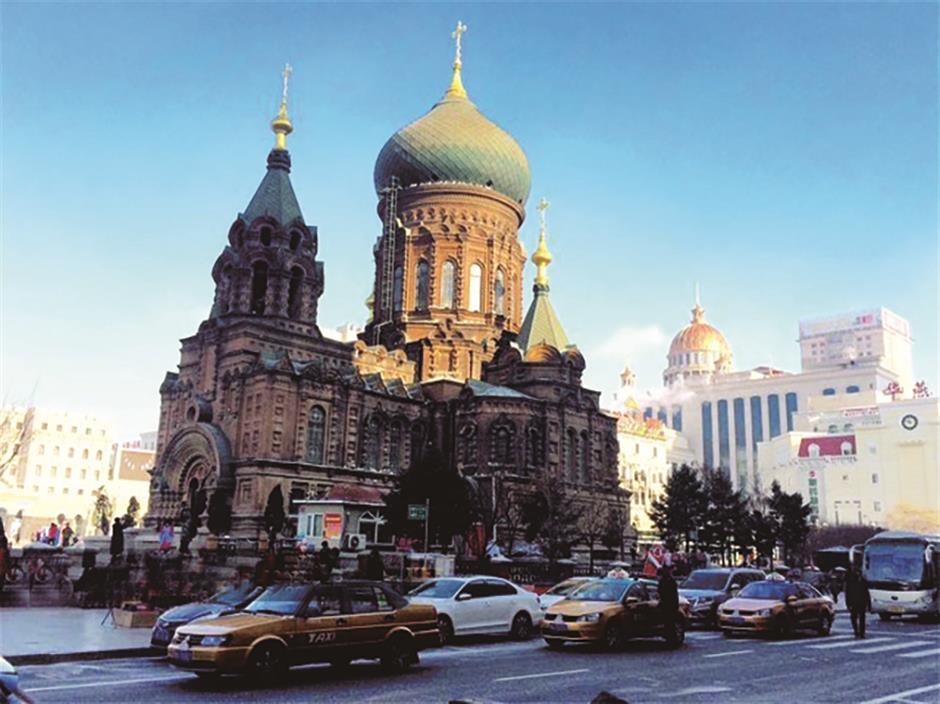 Built in 1907, Saint Sophia Cathedral is the largest Orthodox church in the Far East. Before being shut down in 1958, the cathedral went through two restorations, making it, according to Japanese architectural historian Yasuhiko Nishizawa, almost as magnificent as Saint Basil’s Cathedral in Moscow.

During the Cultural Revolution, the cathedral was severely damaged, and all the holy relics went missing. The site was used as a rehearsal room for the Harbin Drama Troupe and a storeroom for a local department store. Surrounded by residential complexes, few many people knew that a once grand cathedral was hidden in the neighborhood.

In 1986, the cathedral was modified into an architectural art gallery. All the neighboring buildings were dismantled and a square was built around it.

The building is under new restoration this year.

In 1957, threatened with mass flooding by the Songhua River, the city residents built dikes to protected the city. The Harbin government erected the monument to commemorate the heroic local efforts at flood control.

The monument was designed by both Chinese and former Soviet architects. On a Roman-style column, 24 figures portray how Harbin people, including some Russians, fought the flood.