The source of the Nile attracts increasing numbers of Chinese visitors

The source of the Nile River in Uganda has become an international tourism site attracting more than 1 million tourists each year, according to Wiberforce Isabirye, manager of Tourism at the river's source. 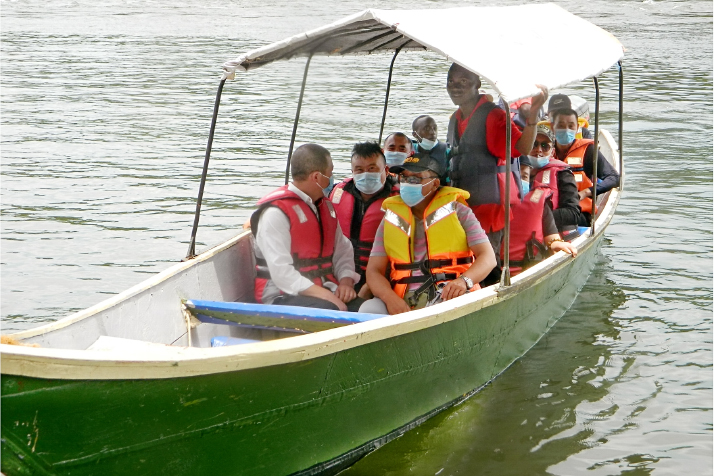 Chinese tourists visit the source of the Nile in Uganda. Photo/Beijing Review

The longest river in the world, the Nile River flows from the East African country of Uganda through several countries to the Mediterranean Sea.

It starts its journey to Egypt from Uganda's eastern town of Jinja, leaving Lake Victoria and flowing gracefully north. Jinja Town is located 80 km from the country's capital Kampala.

About 6,650 km long, the Nile's drainage covers 11 countries, including Tanzania, Uganda, Rwanda, the Democratic Republic of the Congo, Kenya and Ethiopia. The Nile is the primary water source of Egypt, Sudan and South Sudan. Additionally, the Nile plays an important economic role, supporting agriculture and fishing.

The northern section of the river flows north almost entirely through the Sudanese desert to Egypt, where Cairo is located on its large delta, and the river flows into the Mediterranean Sea at Alexandria. Egyptian civilization and Sudanese kingdoms have depended on the river since ancient times, with its annual flooding providing essential irrigation. Nearly all the cultural and historical sites of ancient Egypt developed and are found along river banks, where many of its cities are located north of Aswan.

The Nile basin is complex, and because of this, the discharge at any given point along the mainstream depends on many factors including weather, evaporation and groundwater flow.

All the above factors make the source of the Nile mystical and one of the major tourism attractions on the African continent. Many people who visit Uganda endeavor to visit its eastern town of Jinja and marvel at the source of the longest river in the world.

An official at the source of the Nile Tourism Office, Beatrice Nabirye, said, "Before COVID-19 hit the country we were receiving at least 1,000 local and international tourists every day. But now we get about 200 tourists daily. We are confident that the number will increase immediately when the COVID-19 lockdown is lifted."

She said that tourists from all over the world come to the source of the Nile when they visit the country. The biggest number of foreign tourists come from the United Kingdom, Netherlands, the United States, Japan, Sweden and Germany.

The number of Chinese tourists has also been rising in the last four years, said Nabirye.

"Five years ago, we would only receive about 100 Chinese tourists in the whole year. But later they started coming in reasonably good numbers. Before the COVID-19 pandemic, we were getting at least 20 Chinese tourists every day."

Nabirye said that although some of the Chinese tourists come directly from China, there are also those who are working in Uganda and neighboring countries who visit on weekends.

Zhang Wei, a Chinese worker with a construction company in Kampala, said, "When I get time on weekends, I come and pass time at the source of the Nile. I enjoy eating a fried tilapia (an indigenous fish) whenever I come here. It is a cool place worth visiting."

Despite the current situation, Nabirye said they get more than 100 Chinese tourists per month. She said that they also get a good number of Africans from Kenya, South Sudan and Tanzania.

"Every student in Uganda aspires to visit the source of the Nile at least once before he or she leaves school. Each day, before COVID-19, we used to get more than 1,000 students visiting the place. But even now as schools are closed, we get at least 100 students daily coming on their own," said Tourist site guide Salim Wako.

Apart from tourists enjoying visiting the source of the Nile, they are also treated to other attractions at Jinja, like delicious meals and all types of drinks. There are numerous restaurants and bars that serve many types of local and international dishes and beverages.

Jackson Kabale, a restauranteur at Jinja, said that on public holidays like Christmas, they are overwhelmed by big numbers of visitors. "On Christmas and other public holidays, the whole place is flooded with people, some coming with their children," he said.

In addition to Chinese tourists visiting Jinja, this September, China's Xinhua News Agency reported that Uganda is set to promote the Chinese-constructed Karuma Hydropower Plant and Isimba Hydropower Plant, both on the Nile River, as tourism sites.

The Uganda Tourism Board (UTB) and the Uganda Electricity Generation Co. Ltd., the manager of the power plants, have signed a partnership to package and market the two plants as tourism attractions.

Lilly Ajarova, UTB executive director, described the new venture as the beginning of an important journey, saying the venture will help diversify tourism.

Meanwhile, Zhang Lizhong, Chinese Ambassador to Uganda, referred to the partnership as a brilliant idea.

Karuma is still under construction, and will be one of the largest underground hydropower plants in East Africa. It neighbors the Murchison Falls National Park, one of Uganda's premium tourism sites, while Isimba is located along the Nile in the central region neighboring Jinja and the source of the Nile River.