TRAVEL Through the mist of time, nature reveals its true beauty

Through the mist of time, nature reveals its true beauty 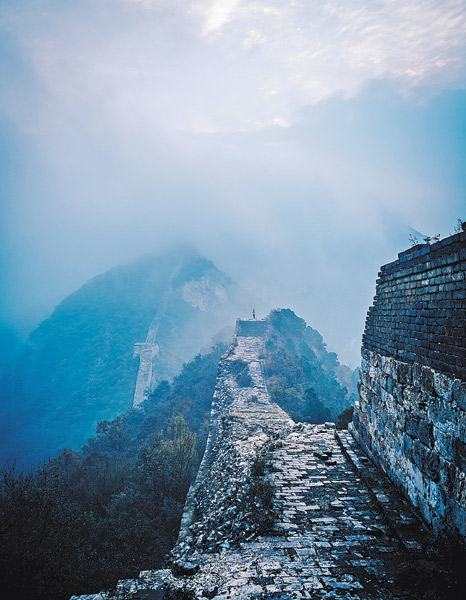 View of the Jiankou section of the Great Wall during sunrise. [PHOTO BY MICHAEL RHYS CARD/CHINA DAILY]

Before coming to China, the Great Wall held a mysterious and poetic quality for me. I had seen it in photos, in film and read about it in books, but my first experience of the wall gave me a very different impression. In 2014, I visited the Badaling section, unquestionably a fascinating place with some incredible views, but perhaps due to the vast number of tourists, the extensive restorations and considerable tourist facilities, it felt far removed from the impression I had built up in my mind.

I have been to many different sections of the wall since then, and each of them offer a different flavor as to what the Great Wall is today and what it was in the distant past, but none have matched my arguably lofty expectations, that was, until the recent National Day holiday.

I decided to hike along the Jiankou section of the wall, one of the more wild areas built during the Ming Dynasty (1368-1644), which rises more than 1,000 meters above sea level, and camp overnight to be able to take in both the sunset and sunrise.

Arriving at the top of the trail, the only access point to get onto the wall itself was a ladder made of tree branches tied together with string. After climbing up, we were approached by an incredibly old man (how he got up there I will never know) who produced a laminated QR code. This enterprising man explained to us that the ladder was his, and that we had to pay for the privilege of its use, 20 yuan ($2.8) per person.

Once we had paid our way, I climbed to one of the highest points on the wall in order to catch the sunset. With my friends staying back to set up the tents, I was the only person on this section of the wall as the sun came down. Being utterly alone on this unique and occasionally perilous section of the wall, witnessing the sunset behind the mountains was a truly unique experience and one that I will be unlikely to forget any time soon, yet it wasn't until suffering through a cold night in a tent that my grand expectations of the wall were finally met.

I woke up expecting to be able to catch the sunrise, however as is often the case, my weather app failed me. Getting out of the tent, I could barely see my hand in front of my face as the whole area was covered in a thick fog. I made the decision to climb (slowly) back to the top of the wall and, luckily for me, the wind picked up just as I did. The vast mountains with the wall cutting a path along them became visible for a few brief moments as the gusts parted the clouds. I took the chance to get some photos before the sight was once again obscured, and in that brief moment, the image of the wall I had built up in my mind was finally realized. The dramatic appearance of the wild wall, poking out from the mist and clouds with an otherworldly quality, is one of the most incredible scenes I have had the privilege of witnessing. The combination of raw nature, geography and architecture all in balance with one another gave birth to a panorama greater than any type of media could achieve. Undoubtedly, I will return to the wall and seek out new trails, but this experience will be difficult, if not impossible, to match.