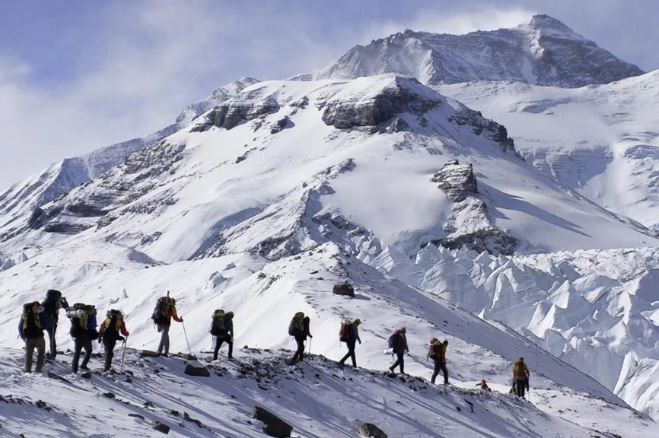 The center, also known as the Tibet Mountaineering Association, held a ceremony on Monday for mountaineering reception crews to start the season in Lhasa, the region's capital.

This year's spring mountaineering activities will take place on the region's 8,201-meter Mount Cho Oyu and on Mount Qomolangma, the world's tallest at 8,845 meters, also known as Mount Everest in the West.

"This spring, the region is expected to welcome 469 domestic and overseas visitors taking part in climbing, trekking and mountaineering guiding," said Sonam, the secretary of the Tibet Mountaineering Association. He, like many in the region, uses one name.

The overseas participants come from 33 countries, Sonam said. Foreign participants will enter the region at Gyirong on the Nepal border on April 4 to get ready.

In 2018, the region received 752 climbers, mountain guides and support crew members from 36 countries for its spring and autumn climbing seasons, according to the center.

Qomolangma draws a huge amount of attention globally from climbers and tourists. This spring, 144 overseas and 12 domestic climbers will attempt to conquer the mountain, and 208 Nepali Sherpa guides will work on the mountain.

Apart from climbing, 73 overseas participants will be trekking near the 5,200-meter Qomolangma Base Camp, some of them will work as support crew at the camp, and the trekking activity will have one participant from Taiwan.

Nyima Tsering, head of the Tibet Sports Bureau, said China's highest peaks are all in Tibet, and the region is key to the country's mountaineering activities.

The region has been making big efforts to prevent pollution and damage brought by mountaineering. Since 2017, regular large-scale cleanup activities have been carried out during the climbing seasons.

"We organize an environmental protection team and local people to carry out the cleanup work in the areas between altitudes of 5,200 meters and 6,500 meters," Sonam said.

He said the climbers and mountain guides are required to bring back their own trash in areas above 6,500 meters, and each climber is required to retrieve 8 kilograms of trash.

"If climbers cannot meet the 8 kilogram requirement, they will be fined and those who bring more will be rewarded," he said.

Only 46 peaks are open to mountaineers, and the removal of rubbish is required whenever a climb takes place.