Tourism boom in NK expected in 2019

With an increasing number of advertisements about North Korea appearing on China's social media and travel platforms, industry insiders reached by the Global Times said they are quite confident that North Korea can expect a boom in its tourism industry this year. 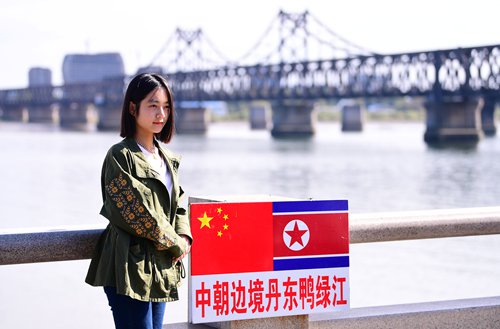 A woman stands at a sign showing the national flags of China and North Korea at the Yalu River bank in Dandong, Northeast China's Liaoning Province. (Photo: Cui Meng/Global Times)

The latest event in North Korea that is drawing the attention of foreign visitors is the 30th Mangyongdae Prize International Marathon to be held in the country's capital Pyongyang in April.

In the past five years, over 1,000 foreigners have attended the event through travel agencies outside Pyongyang, who called the event a "precious chance for foreigners to explore the streets of the mysterious city" and take selfies with locals during the competition.

Such an experience, as well as riding an Mi-17 helicopter and skiing in the Masikryong Ski Resort, is also offered to foreign visitors.

For the majority of travel agencies offering tours to North Korea, their itineraries typically include visits to the Kim II-sung Square, the Juche Tower and the Mangyongdae Revolutionary Museum in Pyongyang, as well as Kaesong's Panmunjom or the "truce village" that has separated North Korea and South Korea for over seven decades.

There's no official information about how many foreign visitors North Korea received. The number is estimated at 100,000 a year, Singapore-based Channel News Asia reported on January 17.

Industry sources told the Global Times on Monday that the number of foreign tourists to Panmunjom, the most visited site in the country, was close to 80,000 last year.

Tourism generates revenues estimated at $44 million a year for North Korea's economy, UK-based newspaper The Guardian reported in April 2018, citing a study from Korea Maritime Institute, a think tank based in South Korea. To attract more visitors to the country, travel agencies are also offering a massage at local bath center, horse riding, roller coaster rides at amusement parks and drinks at a local bar, the Global Times reporter found.

Because international sanctions on North Korea remain, the cultural and travel sectors are the best choice for North Korea to boost its economy and have a better interaction with the outside world, industry insiders said.

After North Korea vowed to focus on economic development at a Party congress in April 2018, the country's efforts to improve infrastructure and travel facilities have improved, said Mang Jiuchen, a People's Daily correspondent stationed in Pyongyang.

North Korea can expect a boom in the travel industry in 2019, as the year marks the 70th anniversary of the establishment of China-North Korea relations, and Chinese account for around 80 percent of North Korea's foreign tourists, Mang told the Global Times on Monday.

Since 2018, the number of Chinese traveling to North Korea has grown substantially with warming bilateral relations, Mang said.

After three visits to China in 2018, North Korean leader Kim Jong-un chose Beijing as the destination of his first foreign trip in 2019 and reportedly spent his 35th birthday in Beijing.

Che said the quality of services in North Korea's travel industry has improved remarkably since 2018.

Hotels and travel buses in North Korea have been renovated and redecorated, he said.

Aside from Chinese, INDPRK also brought travelers from Japan, the US, the UK, Canada, France, Malaysia and Turkey to North Korea, Che said.

Most of the travel products to North Korea are offered by local travel agencies in Dandong, a border city in Northeast China's Liaoning Province.

Major Chinese travel outlets like Tuniu, Tongcheng, Lvmama and Ctrip offer none or only a handful of routes to North Korea.

North Korea's travel agencies are also reaching out to Chinese agencies in areas including Chengdu, Xi'an and the island of Taiwan for business contacts, Yao Xing, a manager at the INDPRK, told the Global Times on Monday.

If the planned summit between leaders from the US and North Korea goes well, the number of Western visitors is likely to increase, Mang told the Global Times.

In the US, around 800 people travel to North Korea each year, CBS News reported in June 2017.

JS Tours Enterprise, a travel agency specializing in North Korea based in Tokyo's Chuo Ward, said it brokered travel for around 50 people a year to North Korea in 2016 and 2017.

However, the number doubled in the first half of 2018, Japanese newspaper Mainichi reported in June 2018.