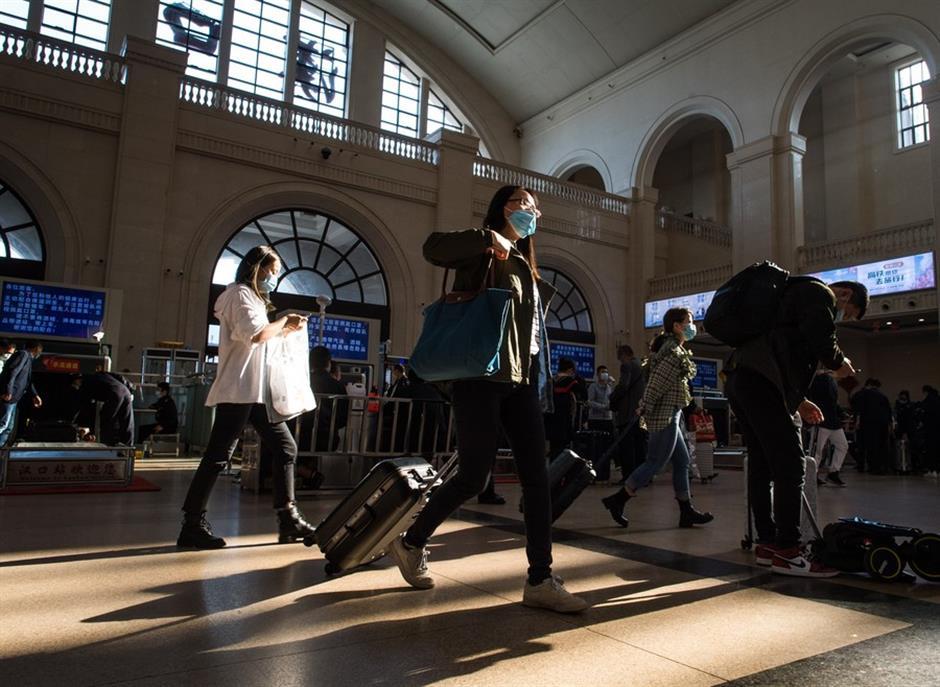 Huang Jianfang, an infectious disease doctor from Shanghai, toured Wuhan, capital of central China's Hubei Province, with her husband and daughter during the eight-day National Day holiday. For her, she was revisiting the place where she had fought the deadly COVID-19 epidemic.

Six months ago, Huang, from the Fifth People's Hospital of Shanghai with Fudan University, joined Shanghai's medical assistance team to Wuhan, where she was in charge of Leishenshan Hospital's infection control division for 47 days.

Hubei, once hardest-hit by COVID-19 in the country, has seen its tourist sector almost recover to the pre-epidemic period with the bustling National Day holiday.

The province received over 52.29 million tourists during the golden week, raking in tourism revenue of 34.83 billion yuan (about US$5.2 billion). The figures represent 82.74 percent and 72.26 percent of those recorded in the same period last year, respectively, according to the provincial culture and tourism department.

"When I arrived in Wuhan in February, the traffic was unimpeded, as all roads were clear of cars and people," said Huang. "But now, the hustle and bustle on the streets make me feel like celebrating the New Year. It's not been easy for Wuhan to recover so soon, and I also feel proud of myself."

When Huang was working in Wuhan, her daughter Chen Shicong was busy preparing for the college entrance exam. She applied for the School of Medicine of Wuhan University when registering for the matriculation.

"During the epidemic, I saw my mom and other medical workers from all over the country rush to the frontline. Their devotion has touched me deeply," said Chen, who enrolled at the school in September.

The province has reported no new locally transmitted infections of COVID-19 since June 4. Previously, it reported a total of 68,139 confirmed cases, with 4,512 deaths.

According to China's largest online travel agency Trip.com Group, ticket reservations for tourist spots in Hubei ranked the fourth on the Chinese mainland from October 1-4.

To show its gratitude to the nation for the support in the fight against COVID-19 earlier in the year, Hubei has scrapped entrance fees for domestic visitors at nearly 400 A-level tourist spots since Aug. 8. This has led to more than 1,000 travel agencies and over 350 star-rated hotels in the province joining the government-subsidized campaign by offering discounts.

Some hot tourist attractions such as Yellow Crane Tower, a landmark in the provincial capital Wuhan, reached the cap for the number of tourists allowed in during the holiday, the provincial culture and tourism department said.

According to Wang Hongnian, director of the marketing department of the administrative office of the tourist site, the number of travelers visiting the site has been on a steady increase since it reopened on April 29. More than 180,000 visitors flocked to the park during the eight-day holiday.

"The daily number of visitors has increased tenfold since July," said Wang. "The booming tourism of the city's landmark reveals an overall tourist recovery in Wuhan."

Pan Chun, a doctor with Zhongda Hospital of Southeast University in the east China city of Nanjing, was one of the tourists that visited Hubei during the holiday.

"I came back with my wife and son for a gathering with my fellow brothers fighting the epidemic on the frontline," Pan said.

Pan was among the first batch of medical workers to assist Wuhan and stayed in the Wuhan Jinyintan Hospital, one of the battlefields amid the epidemic, for 92 days.

He recalled that the first day when he arrived in Wuhan, it was on the second day of China's Lunar New Year holiday, which is a major travel period for Chinese for family reunions. But back then, the city was in lockdown with all train stations and airports suspending operations and residents restricted at home.

This time as travelers, Pan's family dined with local doctors in the hospital to celebrate the triumph in the battle. "When I left Wuhan last time, few restaurants opened. We did not have the chance to dine together for the celebration," he added.

Qian Wenkang, a tour guide with the Wuhan branch of the China International Travel Service Corp., just finished leading a five-day tourist group traveling around Hubei. Guiding 37 visitors from south China's Guangdong Province, he introduced the scenic city of Yichang on the upper stream of the Yangtze River and Shennongjia Forestry District.

Two nurses, who had assisted Hubei during the epidemic, were among the group members. They shared with Qian and others their unforgettable experience in the fight against COVID-19. Many of them were deeply touched and could not help crying.

"Though the economy has been dimmed by the epidemic, it's getting back on its feet," Qian said. "In the first Golden Week travel after the epidemic, Hubei's booming tourism becomes a bright spot of the country and even the world."