The year 2018 is essential for Tibet's tourism industry as the regional government is making efforts to boost the all-for-one tourism to enhance the land's charm as a tourist destination at the Third Pole of the world. 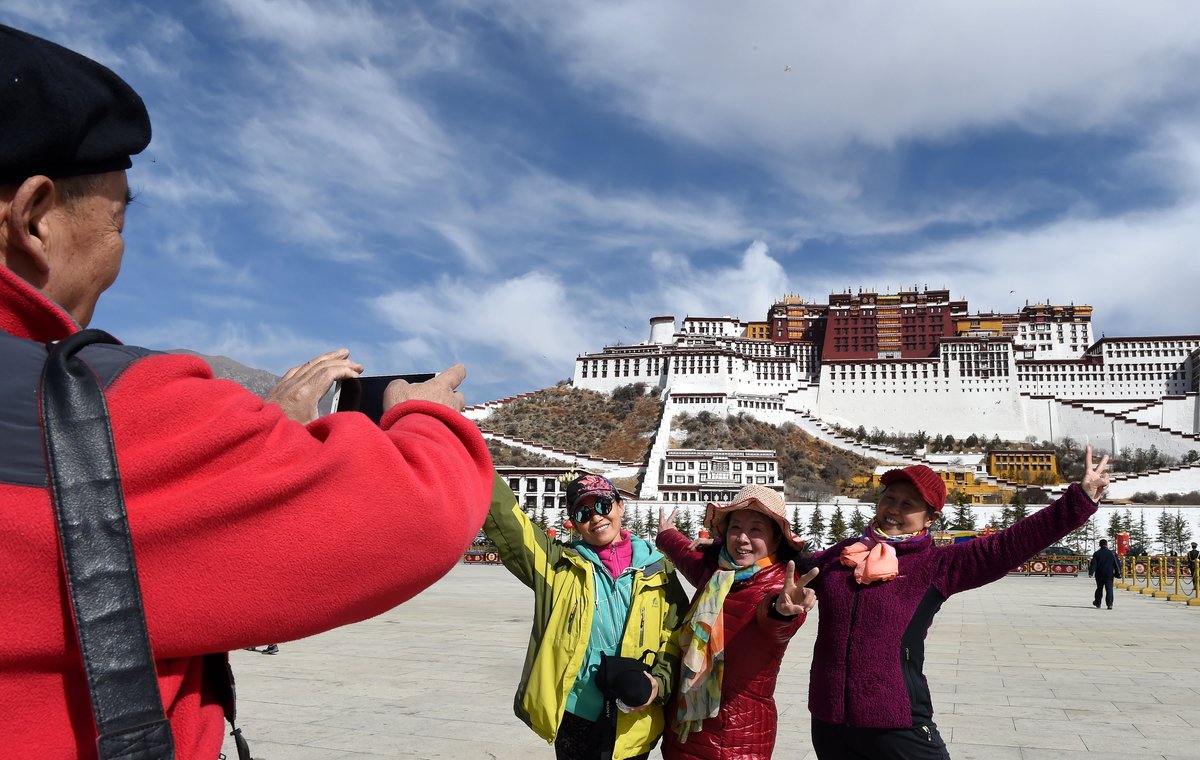 Unlike traditional tourism which focuses merely on touring activities for leisure, the all-for-one tourism involves the reconstruction of an industrial chain to engage all possible sectors that a tourist may be interested in, thus making tourism a leading sector to drive along the development of other sectors.

At the ongoing Fourth China Tibet Tourism and Cultural Expo, Qizhala, chairman of Tibet autonomous region, stressed the need to implement the "Tourism plus" strategy, as the regional government hopes to encourage the integration of tourism with other sectors such as farming and husbandry, traditional Tibetan games, Tibetan medicines, cultural and art, rural leisure and health care, so as to enrich tourism products and increase the appeal of Tibet as a tourist destination.

Official estimates released at the expo show that Tibet will receive more than 30 million tourists this year, a new record high and triple as many as that in 2012. The number was 25.61 million last year, up 10.6 percent from a year earlier.

Last year, Tibet's tourism revenue was 37.94 billion yuan ($5.58 billion), up 17.4 percent from 2016, accounting for nearly 30 percent of the region's gross domestic product. In 1980, when China started the economic reform and opening-up, however, local tourism revenue was negligible.

"Tourism has become the region's most dynamic and most promising industry, and also a forerunner sector strategically important to the economic and social development of Tibet," said Qizhala.

To extend the tourism industrial chains to more sectors and attract more tourists from at home and abroad, the regional government has decided to establish an industrial development fund to channel more private investment into the sector and encourage more public-and-private capital cooperation.

Investment funds and venture capital guidance funds will also be established to boost innovation and entrepreneurship in the tourism-related industry, he said.

Road and railway construction will be sped up to improve the public services for tourists.

Yao Tandong, director of the Qinghai-Tibet Plateau Institute with the Chinese Academy of Sciences, proposed at the expo the establishment of "Third Pole" national parks to make better use of tourism resources and better protect the environment.

The four candidate national parks are Serling Tso, Tibet's largest lake; Mount Qomolangma; the world's deepest canyon Yarlung Zangbo Grand Canyon; and Earth Forest, the ruins of the palace of the Gurge Kingdom dating back to the 9th century.

Once the Third Pole National Parks were established, unified planning could be made on the protection of these scenic areas to minimize the damage from tourism on ecology. The behavior of individual travelers will be better regulated while in-depth tours will be arranged to target high-end travelers.

Local residents who live nearby could also be better equipped to engage in tourism services. In 2017, some 125,000 farmers and herders benefited from the tourism industry, earning 12,000 yuan per person on average, by selling souvenirs, snacks, and other specialty products.

Like most tourist destinations across the world, Tibet sees a strong seasonality in its tourism industry. Tourists tend to swarm in from May to October, while the off-season lasts from November to April as the air often gets thinner, and the weather is cold and dry.

With a package of incentives released in February, including free admission to 115 tourist attractions and lower prices for starred hotels, touring vehicles and airfares, winter tourism has shown positive changes.

The number of tourists to Lhasa and Nyingchi both surged by more than 50 percent from Feb 1 to April 30. The Potala Palace in Lhasa has seen its visitors more than double in February compared with the same month of last year.

Statistics from the regional tourism authority show that from January to April, more than 2.67 million domestic tourists came to Tibet, up 63.5 percent from the same period last year, while Tibet took in tourism revenue of more than 3.5 billion yuan, up 62.8 percent.

During the same period, the occupancy rates of international hotels, chain hotels and boutique homestays in Lhasa and Nyingchi both exceeded 80 percent, much higher than in normal years.

Known as the "sunlight city" in Chinese, Lhasa has more than 3,000 hours of sunshine annually on average. It is sunny on most winter days, therefore, basking in the winter sunlight in Lhasa has been a selling point of the winter tourism promotion.

Li Xinyu, vice president of Ctrip Group, noted that thanks to the rising awareness of the all-for-one tourism and the winter promotion, Tibetan's tourism has entered a golden period and witnessed explosive growth.

Ctrip data point to a trend of consumption upgrading too, he said at the expo. In 2018, domestic tourists' average stay in Tibet has been extended to 9.6 days from 9 days, and each tourist spends 9,893 yuan on average, about 800 yuan more than the previous year.