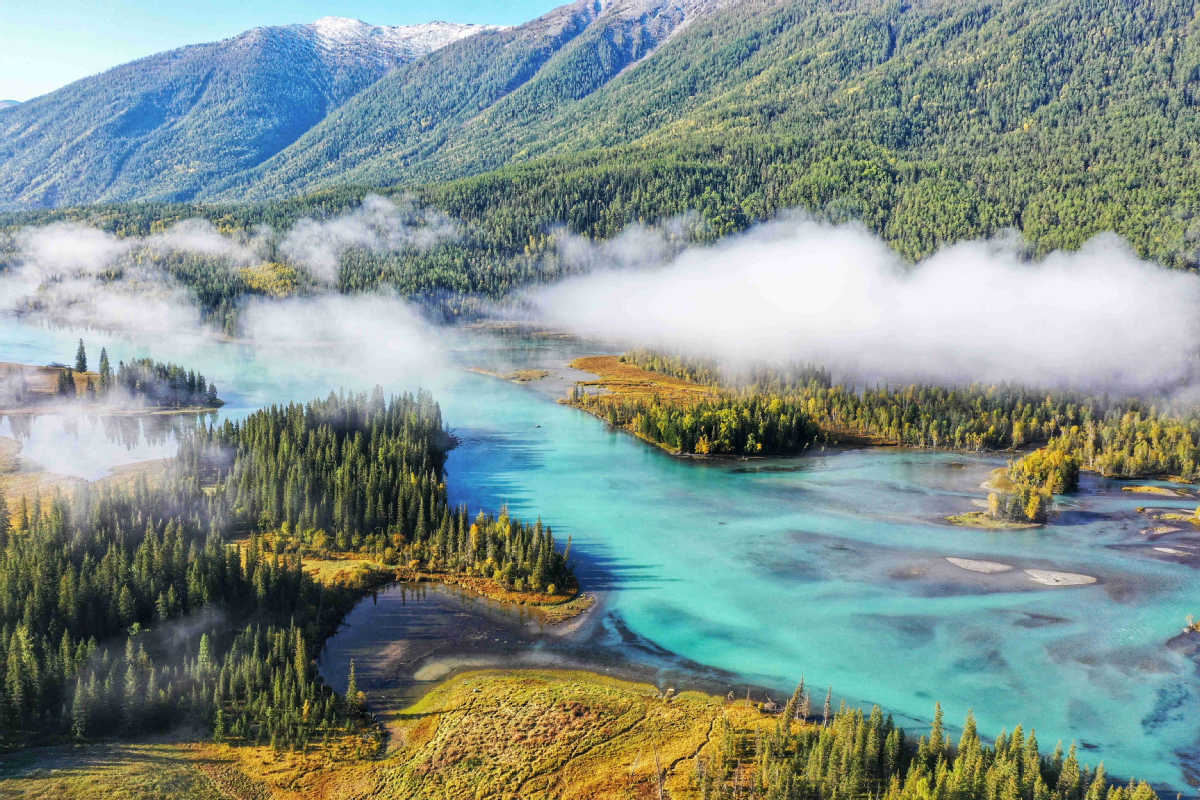 A view of the Kanas Lake, located in the valley of the Altai, Xinjiang Uygur autonomous region. (Photo provided to China Daily)

The Xinjiang Uygur autonomous region, renowned for its natural beauty, is a dream holiday destination for many people.

As such, Xinjiang will further develop its tourism industry to attract more visitors and develop the sector into a pillar industry to support regional development.

Visitors to the region that covers one-sixth of China's territory are stunned by the range of natural landscapes, such as grassland, deserts, snow-capped mountains and alpine lakes. It is often said that one can find every kind of natural scenery in Xinjiang, except ocean views.

Visitors can also get a taste of the cultures of the region's various ethnic groups. Xinjiang is divided by the Tianshan Mountains, and lifestyles differ vastly between the north and south.

In the north, tourists can roam the grassland on horseback. In the south, they can start their day by drinking a cup of tea with members of the Uygur ethnic group at local tea houses.

Xinjiang has been a cultural melting pot since the days of the ancient Silk Road. As a result, it is home to 14 ethnic groups, including Uygurs, Kazaks, Kyrgyz people, Tajik people, Hui and Han.

The regional government aims to make southern Xinjiang a tourist destination that showcases the ancient Silk Road's heritage and ethnic culture. Meanwhile, it will build tourist clusters in the Altay Mountains in northern Xinjiang, the Tianshan Mountains and the border areas.

The government will also continue to boost tourism during winter, which is traditionally the low season for visitors to the region.

On May 27, the Xinjiang People's Congress, the regional legislature, passed a regulation to boost tourism. The regulation, which will take effect on July 1, aims to solve key issues that have hampered the development of tourism.

A view of the Ancient City of Jiaohe in Turpan, Xinjiang. (Photo provided to China Daily)

"The regulation can help Xinjiang, which is rich in tourism resources, become a place with a strong tourist industry, which would boost social and economic development," Zhang Jie, head of the policy department at the regional culture and tourism bureau.

It also states that once a plan has been approved, it must not be changed unless special circumstances force alteration.

Zhang said, "What's more, the regulation emphasizes the importance of environmental protection during the development of tourism projects."

In the past, Xinjiang was often seen as "somewhere far way", but improvements to the transportation infrastructure mean the region is now better connected to other parts of China by road, highspeed rail and air. That means traveling to Xinjiang is now easier than ever.

The transportation infrastructure within Xinjiang has also been significantly improved, and all cities are now connected by highways.

Construction of a highway to connect Urumqi, the regional capital, and northern Xinjiang's Altay city is expected to be completed this year. It will be Xinjiang's first highway built across the desert.

The region plans to further boost investment in key transportation infrastructure, including highways and airports, by 2025.

"The continuous efforts to invest in and construct such infrastructure in the past five years have provided strong support for the development of Xinjiang and have made profound changes to both urban and rural areas," Shohrat, the regional chairman, said.

Xinjiang also aims to build a highway network around the Tarim Basin to link cities and counties in the region's south and support local development.

That factor led the regional government to design more routes suitable for road trips and build more RV parks to accommodate the needs of self-driving tourists.