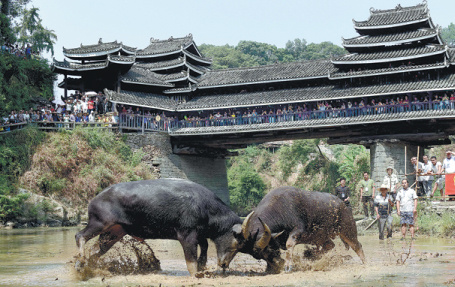 Villagers and tourists watch two bulls go head-to-head during an annual traditional bullfight festival in Sanjiang in the Guangxi Zhuang autonomous region, earlier this month. The county sees cultural tourism as a way to lift villagers out of poverty. [Photo by GONG PUKANG/FOR CHINA DAILY]

Between 17 and 20 percent of the poverty-stricken population in China were lifted out of poverty by tapping into the strength of local tourism resources, said Li at a press conference. The ratio was at least 30 percent in some areas with comparatively high poverty rates, he said.

Chinese authorities have stepped up support for the construction of infrastructure and public service facilities in its regions that are impoverished but endowed with tourism resources, enabling these regions to make full use of local strengths.

Citing Yejia village in Guyuan city of Northwest China's Ningxia Hui autonomous region as an example, he said "agritainment," or "agri-tourism" services offered by the village involved more than 130 households and created more than 1,100 jobs.