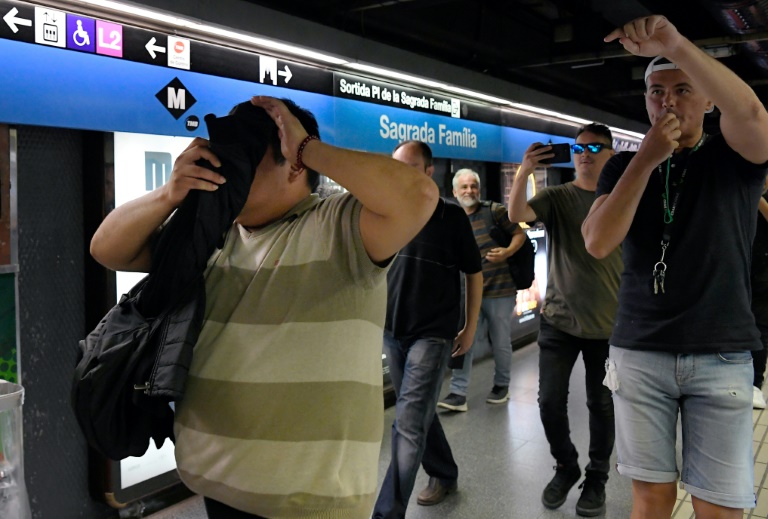 Citizens on patrol use whistles to warn metro passengers of a presumed pickpocket (L) in Barcelona where there has been a surge in muggings and burglaries. (Photo: AFP)

A surge in muggings and burglaries in Barcelona, mainly targeting tourists, has sparked alarm in Spain's second-largest city, leading local residents to form their own crime-fighting patrols.

The US consulate in Barcelona on Wednesday warned its nationals of "an increase in violent crime in the city" and urged them not to "display signs of wealth such as wearing expensive jewelry or watches".

The alert came just days after Afghanistan's ambassador to Spain was lightly injured in a group mugging to steal his watch in the city centre, and a 91-year-old French woman was hospitalised after thieves yanked her necklace, causing her to fall.

Barcelona, a European tourist hotspot, has recorded eight murders since July, an unusually high number for the Mediterranean seaside city, and in June a visiting South Korean public servant died from injuries she suffered during a mugging.

The city's hotel association has warned that Barcelona's reputation could be "seriously harmed".

Albert Batlle, Barcelona's deputy mayor in charge of security, acknowledged there was a "security crisis" but called for a "calm and responsible analysis" of the problem.

Thefts and violent robberies in Barcelona, a city of 1.6 million residents, jumped by 28 percent between 2016 and 2018, according to police figures.

The trend has continued in 2019 with a 31 percent rise in violent robberies during the first half of the year.

But the total number of violent crimes -- homicides and bodily injuries -- fell during this period and the murder rate in Barcelona is lower than in other European cities such as London, Berlin and Brussels.

"Barcelona continues to be a very safe city," said Sonia Andolz, an expert on security policies, adding the rise in crime "was not enough to justify the alarm that is being generated".

The boom in tourism the city experienced since it hosted the 1992 Summer Olympics is partly to blame, Andolz said.

The number of tourists who stayed at a hotel in Barcelona soared from 1.7 million in 1990 to 8.8 million in 2017, according to municipal figures. Millions more arrive on cruise ships or stay in holiday flats.

Nearly 60 percent of all burglaries and robberies are concentrated in the two most visited neighbourhoods -- the Ciutat Vella, the densely populated district at the city's heart, and the Eixample, a tree-lined district that is home to most of Barcelona's famous monuments such as the Sagrada Familia basilica.

Gustavo Equia, who owns an Argentinian empanada shop in Ciutat Vella that was held up three times in a single night recently, complains that the neighbourhood has been "left in the hands of God."

"There are more and more problems, many thefts, stabbings," he added.

Many blame Barcelona's left-wing mayor Ada Colau, accusing her of being too lenient since she came to power in 2015.

City hall recently boosted its crime-fighting budget and the regional government has deployed more officers to the city, including anti-riot units.

But according to police only one in 10 people arrested for violent robberies in 2018 and 2019 went to prison.

In response, some locals have organised "citizen patrols" to fight crime.

Carrying signs in different languages they tour the city and metro stations, warning of pickpockets.

When they spot a suspected thief they blow whistles and shout "leave pickpocket!" until the person goes away.

"You see so much insecurity, so much anxiety, that you say: 'Either we do something to save Barcelona or it will turn into a South American city'," said Eliana Guerrero, a member of one of the patrols who is originally from Colombia.

"This didn't happen before. There were robberies, but not the violence we have today," added Guerrero, a real estate agent who unsuccessfully tried to become a police officer.

City officials and experts are concerned.

"Taking justice into your own hands is not the solution. A citizen without training, without a uniform and without any controls can never play this role," said Andolz.