China's National Day holidays, the first and only eight-day holiday this year after the waning of the epidemic, is likely to see a peak in traffic amid the nation's effective epidemic control measures, with some industry analysts estimating that the number of tourists could reach 70 percent to 80 percent of last year's volume. 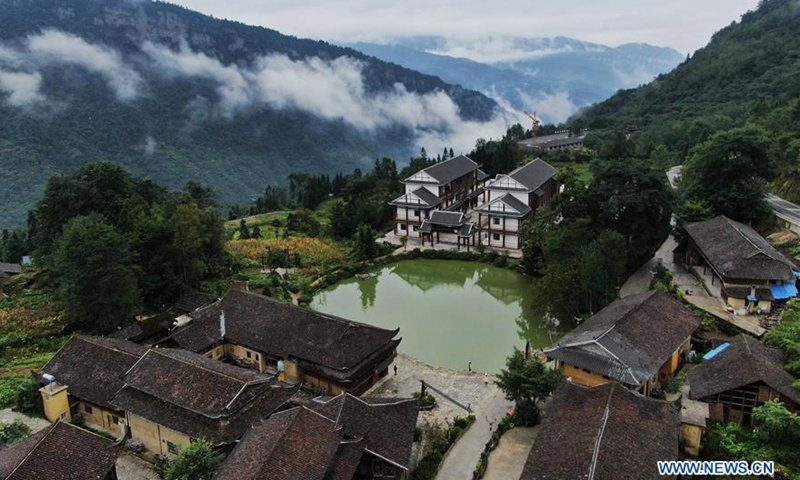 Aerial photo taken on Sept. 4, 2020 shows the scenery of a village in Houping Township in Wulong District, southwest China's Chongqing. Wulong carries out ecological-tourism according to its mountainous environment in recent years. By improving the accommodation level and capacity of the villages, rural tourism has been developed, which helps people here get rid of poverty without working far away from home. Photo:Xinhua

Eyeing the opportunity, most travel agencies and companies have rolled out promotions and launched more travel packages to attract tourists. The National Day holidays, also dubbed as the golden week, begin on October 1.

At online travel platform Trip, more than 4,000 Chinese travel agencies have released over 10,000 tourism products for the holiday. Other platforms including LY.COM and Fliggy are also offering discounts covering hotels and airfares.

"This year, tourists are booking travel products five to 10 days in advance, and so far, the volume of bookings at our platform is high," a spokesperson of online travel agency Lvmama, told the Global Times on Thursday, adding that some travel products are being sold at 5 to 20 percent discount.

Also, cities in southwest and northwest China, such as Guizhou and Gansu, have also reported big gains in booking numbers.

Industry observers estimated that the number of tourists during the golden week will bounce back to up to 80 percent of last year's level, highlighting the country's swift anti-epidemic measures. They believe holidays could become a key engine for driving consumption.

Last year, 782 million domestic tourist trips were made during the National Day holiday, with a revenue of 649.71 billion yuan ($95 billion).