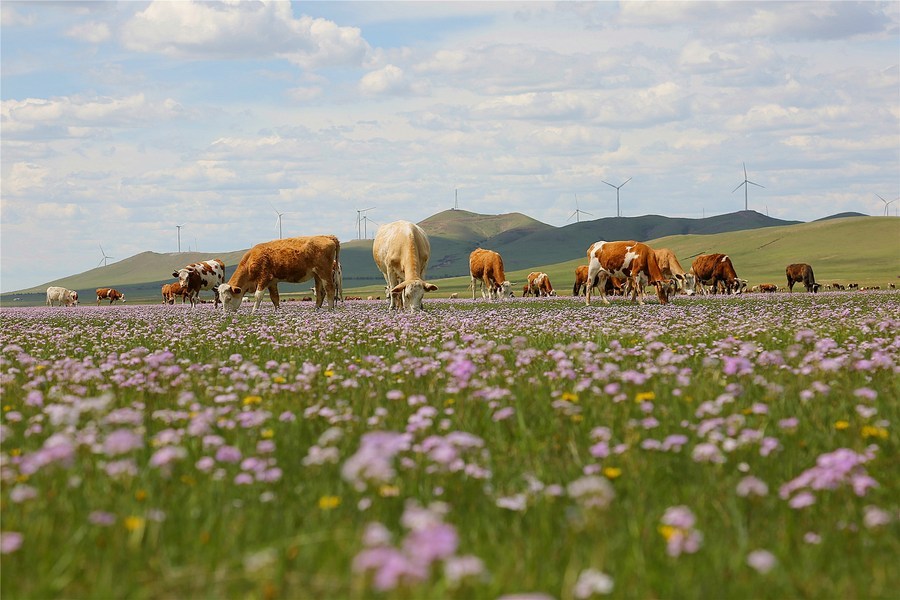 HOHHOT - The vast grassland in North China's Inner Mongolia autonomous region has turned green. On a pasture, herdsman Hungerbator has just finished refurbishing and cleaning up a dozen yurts to prepare for the upcoming peak tourist season. Yurts are round tents and are traditional Mongolian dwellings.

Together with his family, Hungerbator runs an ecological pasture with an area of about 900 hectares in Jarud Banner in Inner Mongolia.

Along with cattle and sheep breeding, tourism is growing in the meadows. Entertainment activities unique to nomadic groups like horse riding and archery attract tourists. They can also experience feeding and milking cows, and brewing milk tea together with the herders.

However, this fertile and vibrant land was once very different. Back in 2014, desertification expanded as a result of inadequate rainfall and overgrazing.

"Sand covered many places, and no grass or trees grew," Hungerbator recalls.

In response, the local government encouraged herders to implement sheep number caps within the grassland capacity and increase cattle breeding. The government also supported them in developing other forms of businesses.

"Sheep tend to eat grass roots, while cows only eat the tip, which will not affect the growth of grass," Hungerbator says.

By the end of 2016, Hungerbator sold more than 1,000 sheep to help restore the grassland ecology, which proved effective in mitigating desertification on his ranch.

In 2017, Hungerbator seized the opportunity to start a tourism business. "Ecological tourism does no harm to the grassland ecology and is profitable. Plus, I can make more friends."

To support his startup, the Jarud Banner government invested in the construction of three yurts and restrooms for tourists near his ranch.

The shift from being a herder to tourism operator has brought Hungerbator more than a higher income. In 2019, his ranch received somewhere between 300 and 400 tourists per day during peak season, raking in nearly 500,000 yuan ($77,750). Despite the impact of the COVID-19 pandemic, this tourist destination sustained a revenue of 200,000 yuan last year.

In Jarud Banner of Tongliao city, where 51 percent of inhabitants are Mongolians, more and more herders like Hungerbator are taking high-quality green paths toward prosperity.

Hungerbator has not forgotten his struggles. He has connected with four impoverished families and offered them jobs. Herdsman Hei Ying, 51, has been working at Hungerbator's ranch during peak tourist seasons for three consecutive years, earning a monthly income of 3,000 yuan.

"I used to barely make ends meet by tilling land or taking part-time jobs, but now I don't have any worries about my livelihood," Hei says.

Looking to the future, Hungerbator plans to upgrade his tourist facilities and tap into the broader market for local specialties like dairy products.