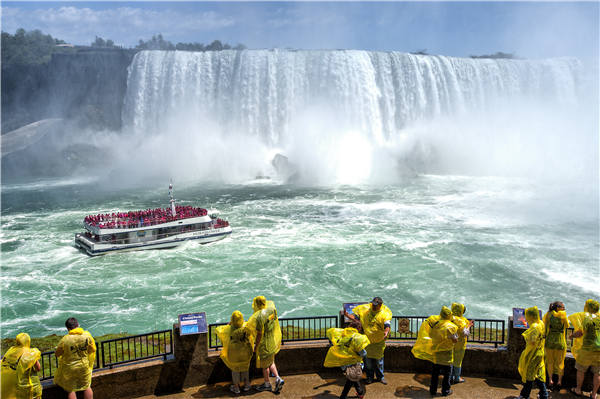 Tourists can view Niagara Falls in Canada from a helicopter, below or aboard a cruise ship. A growing number of Chinese are visiting North America's northernmost country to experience its diverse offerings. (Photo by Destination Canada/for China Daily)

Viewing Niagara Falls from a helicopter was a highlight of Guan Jing's recent visit to Canada.

He also enjoyed seeing the cascades from below, aboard a cruise ship.

"I could feel the water splashing," the 31-year-old Beijing resident recalls.

"A lot of passengers were screaming excitedly."

Guan is among a growing number of Chinese visiting North America's northernmost country. And Chinese arrivals seem likely set to increase, following the launch of the China-Canada Tourism Year in Toronto in March. The closing ceremony will be held in China.

The year features a slew of new initiatives and activities in both countries to boost mutual tourism.

Canadians paid over 800,000 visits to China in 2017, a nearly 9 percent increase over the previous year, People's Daily reports.

Chinese arrivals reached a record of over 680,000 in 2017, a 12 percent increase over 2016, Destination Canada reports. China is the country's third-largest source of inbound tourists.

Most Chinese visit during the peak period in July and August. 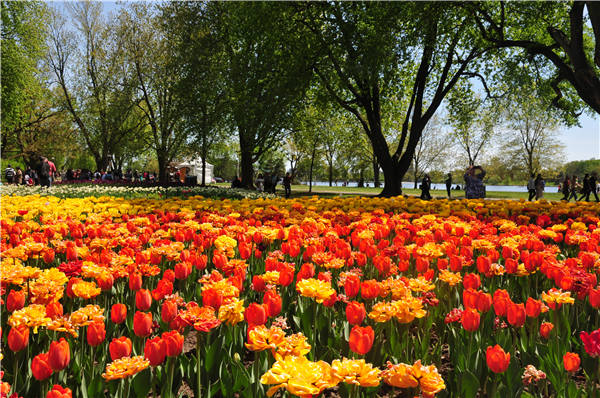 The annual Canadian Tulip Festival, with the theme of "China-Canada Tulip Friendship" in 2019, claims to be the world's largest tulip festival. (Photo by Feng Yi/for China Daily)

Chinese can use UnionPay－China's largest payment provider－when applying for visas online since June 22.

"The tourism year is seeing a jump in Canada's offerings to catch up with Chinese demand," says Yu Wenjun, who's in charge of Ctrip's North American business.

The company now offers tours with themes like autumn maple and aurora viewing.

Toronto－the country's largest city－is about an hour and a half by car from Niagara Falls. It offers such diverse offerings as heritage, art galleries and icewine tours.

Destinations include the historical Casa Loma mansion and the old Distillery District, which is packed with restaurants and shops.

Graffiti Alley is popular on Instagram as the area is adorned with murals by various artists, including local graffitist Uber5000's classic yellow bird.

A large proportion of Chinese visitors come on group tours, but individual travelers have been increasing in recent years, Simpson says. She adds that the city's hotels are working to better accommodate Chinese tourists. Some, such as the Chelsea Hotel, offer Chinese-style breakfasts.

Chinese visitors are seeking more adventurous activities. One attraction that has been gaining popularity is the Edge Walk on the CN Tower's 356-meter-high roof.

Toronto, Canada's capital, is an hour's flight from Ottawa, which hosts Ontario's only UNESCO World Heritage Site, the Rideau Canal. The Canadian Museum of History is also popular.

"The city offers a relaxed way of exploring a new destination."

Ottawa hopes to use the tourism year to improve Chinese travelers' experiences and to strengthen relationships with Chinese tour operators to encourage more Chinese to visit and to stay longer.

Ottawa Tourism signed an agreement with the local company Motion Pay in May to enable visitors to use the popular Chinese payment platforms WeChat Pay and AliPay.

The tourism bureau offers training sessions to member businesses, such as hotels, restaurants and attractions, to promote the service. "It's an education ... to make them aware there is a different payment system in China. Also, it makes it easy for tour operators to bring tourists and easy for regular individual tourists," Van Kregten says.

"Chinese tourists are more adventurous than before. They want to paddle a canoe or skate in winter and try authentic Canadian food. I think it's more of a true desire to learn how our lifestyle is different from Chinese."

Van Kregten also says 2019 will also be an important year for tourism from China, since it's the 20th anniversary of the sister city agreement Ottawa signed with Beijing.

The Canadian Tulip Festival's theme, "China-Canada Tulip Friendship", will mark the anniversary. And the featured species will be named the "China-Canada Friendship Tulip". Bulbs were available at this year's festival and will be planted in Beijing and Ottawa.

The annual event, held in May, claims to be the world's largest tulip festival.

Chinese tourism bureaus set up booths and promoted popular Chinese destinations in the Lansdowne Park Tulip Gallery, which features artworks inspired by the flower, at this year's event.

"(The 2019 edition) will be a great opportunity for our visitors to learn about China's tulip festivals and gardens," Van Kregten says.

And it seems likely the tourism year will provide more chances for Chinese to visit and learn about Canada, in general.