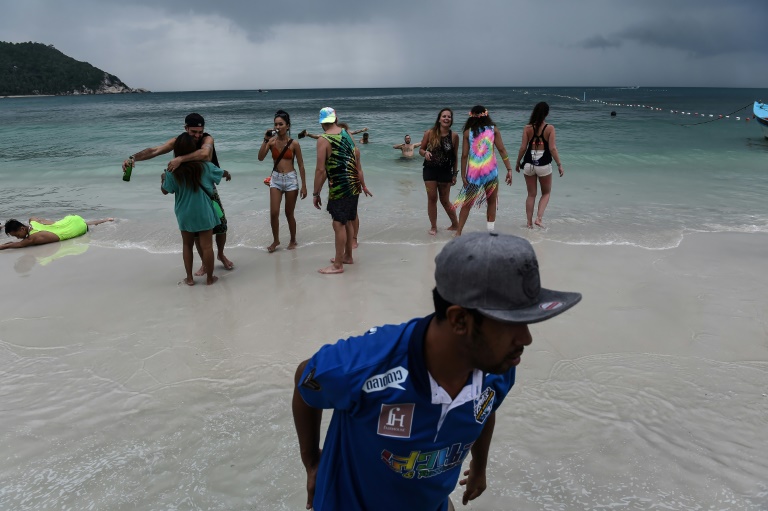 Ko Phangan and nearby Koh Tao are hugely popular with tourists over the Christmas and New Year season. (Photo: AFP)

Tens of thousands of tourists have fled some of Thailand's most popular islands as Tropical Storm Pabuk closes in and threatens to batter the southern part of the kingdom with heavy rains, winds and seven-metre (22-foot) waves.

The islands of Koh Phangan and Koh Tao, packed with holiday-makers during the peak Christmas and New Year season, have emptied out since Wednesday as tourists squeeze onto ferries bound for the southern Thai mainland, with swimming banned and boats set to suspend services.

Pabuk, Thailand's first tropical storm in the area outside of the monsoon season for around 30 years, is poised to hit the two islands as well as neighbouring Koh Samui on Friday afternoon, before cutting into the mainland.

Packing winds of 104 kilometres per hour (65 mph), Pabuk is unlikely to intensify into a full blown typhoon, according to forecasters.

"But we expect waves as high as five or seven metres near the eye of the storm," Phuwieng Prakammaintara, head of the Thai Meteorological Department, told reporters.

No official evacuation order has been given but tourists are leaving in droves, with those unable to book flights preparing to see out the storm on eerily deserted islands.

"I think the islands are almost empty... between 30,000 to 50,000 have left since the New Year's Eve countdown parties," Krikkrai Songthanee, Koh Phangnan district chief, told AFP.

The acting mayor of Koh Tao, one of Southeast Asia's finest diving spots, said boats to Chumphon on the mainland were crammed with tourists, but several thousand guests were still on the island likely to brave the storm.

"It's difficult to predict the severity of the storm so people should comply with authorities' recommendations."

On Koh Samui, a Russian man drowned on Wednesday after his family ignored warnings not to go into the sea.

"Island officials announced the warning and put up the red 'danger' flags... but maybe the family did not think the situation was that serious."

Bangkok Airways, which has a virtual monopoly on the air route to the island, cancelled all flights in and out of Samui on Friday.

Authorities prepared shelters for tourists who decided to wait out the storm or who could not secure seats on ferries for the mainland before services are suspended late Thursday.

Pabuk, which means a giant catfish in Lao, is also expected to dump heavy rain across the south, including tourist hotspots in the Andaman Sea such as Krabi and Phuket.

The Similan National Park, home to pristine beaches and bays, has been closed until Saturday as a precaution as the storm bites into business during the peak season.

The southernmost provinces of Pattani, Narathiwat and Yala near the Malaysia border are also bracing for flooding.

Thailand's economy is heavily reliant on tourism. The kingdom is expected to welcome a record 40 million people this year, many bound for its southern beaches and resorts.