TRAVEL Tourists return to South Korea as relations warm up

Tourists return to South Korea as relations warm up 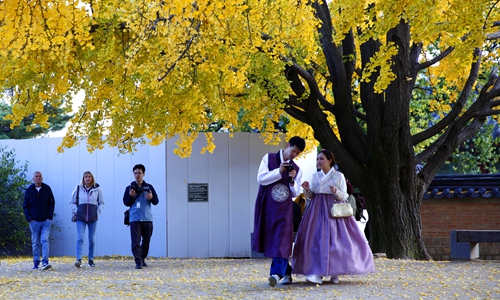 Tourism experts took this meeting as a positive signal for the sector. China-South Korea relations turned icy in the shadow of the US deployment of the Terminal High Altitude Area Defense (THAAD) system in South Korea.

"The meeting between the two leaders sent a positive signal to boost tourism. There is still much room to grow," Xu Xiaolei, chief brand officer of China CYTS Tours Holding, told the Global Times on Tuesday.

Visa applications from Chinese to South Korea and the number of Chinese tourists to the country have both increased from the low point in 2017, when China suspended group tours to South Korea in response to the THAAD deployment.

As of November, the number of Chinese visitors to South Korea soared to 5.51 million, up 26.1 percent, said Yonhap News Agency.

It is notable that the number of Chinese tourists to Japan has also risen rapidly.