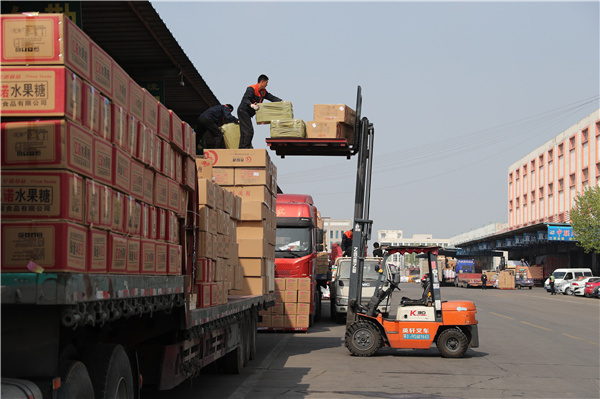 Cargo being loaded in the Jinlan logistics base in Linyi, Shandong province. [Photo by Wang Jing/China Daily]

In the information service center at the Jinlan logistics base in Linyi, Shandong province, information on logistics orders and cargo vehicles running in and out of the city, such as vehicles' arrival and departure times, is updated in real time on a big screen. The information is shared with logistics runners in more than 2,000 cities around China.

Outside the center, vehicles loaded with goods line up to leave the base through a gate one by one.

Zhang, who has been a long-distance driver for more than 20 years, said he is grateful for the expressways that have not only made his trip much safer but saved him a lot of time.

"The expressway has cut my travel time by a third."

This is partly attributable to improved traffic conditions since the expressway in Shandong province was expanded to eight lanes from the four lanes last year, he said.

"When it was four lanes there were often traffic jams."

Drivers in Linyi can enter the Beijing-Shanghai expressway from three entrances in less than half an hour after leaving the logistics base.

"Two more entrances are being built less than a kilometer from the logistics base," Zhang said.

The expressway has sped up local development by connecting the city with the outside, said Wang Shiling, Party secretary of Shandong Lantian Group, a major investor in Jinlan logistics base.

Every day more than 800 trucks are dispatched from the base, transporting goods to more than 2,000 cities and counties around China, the base said.

The developed logistics sector has made Linyi a major wholesale trade hub in China, and the city now has 87 wholesale markets in which more than 300,000 people are doing business with various commodities.

Major express service companies have set up branches in Linyi.

More than 276 million packages were delivered from Linyi to other places during the first three months of the year, making the city the top among cities in Shandong in the number of delivered packages.

Unlike Yiwu in Zhejiang province, the world-renowned export capital for knickknacks, Linyi is more oriented toward the domestic market.

However, the city's international trade is expanding as it uses the Belt and Road Initiative as an opportunity to integrate into China's new development paradigm of dual circulation, the city government said.