A domestic travel boom is anticipated for the Mid-Autumn Festival holiday from Sunday to Tuesday thanks to the resumption of cross-provincial tours and the opening of the Universal Beijing Resort. 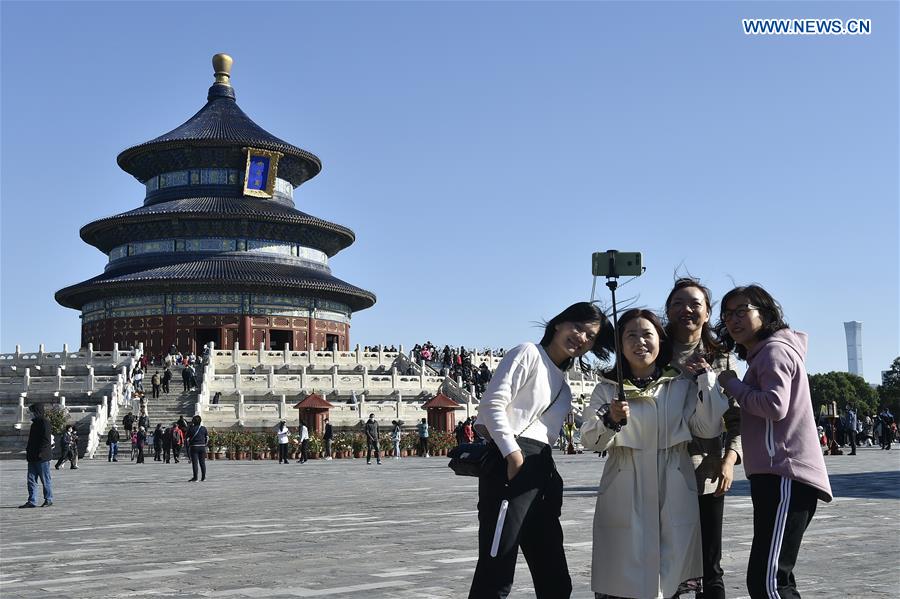 Tourists pose for a group selfie in front of the Temple of Heaven during the National Day and Mid-Autumn Festival holiday in Beijing, on Oct 4, 2020. [Photo/Xinhua]

While Putian in Fujian province has been hit by a new COVID-19 outbreak since Saturday, cross-provincial tours are running smoothly in other provinces and cities such as Shanghai and Zhejiang province. Travel restrictions have been loosened since Aug 20 after sporadic COVID-19 outbreaks were brought well under control, setting up the possibility of strong growth in tourism during the three-day holiday.

Putian's bureau of culture and tourism released an emergency notice on Sunday suspending the operations of all public cultural venues, cinemas and cybercafes in the city. Tourism activities and tourism attractions in the city have also been suspended to help bring the outbreak under control.

Early figures from some travel agencies show a booming travel market for the holiday.

According to a recent report by Trip.com Group, an online travel agency, orders on its platform for cross-provincial tours increased by 356 percent on Sept 6 compared with Aug 20, when many destinations were under strict management due to sporadic COVID-19 outbreaks.

Tuniu, another online travel-service provider, said on Sept 8 that over 57 percent of its users had made reservations for long-distance tours over the holiday. It said about 40 percent of them planned to take four-day tours, while 24 percent were planning a six-day trip.

Popular destinations included Hainan, Yunnan and Sichuan provinces, but travel agencies said Beijing is expected to take the top slot as the Universal Beijing Resort is scheduled to officially open on Monday, the eve of the Mid-Autumn Festival.

Lvmama, another online travel agency, said that searches for Universal Beijing Resort on its platform have risen sevenfold since news about the timing of its opening was released in late August.

Travel portal Fliggy said reservations for air tickets to Beijing on its platform had risen by over 200 percent in a week.

Fang Zeqian, an analyst with Trip.com Group's tourism research institute, said that the opening of the Universal Beijing Resort is a boost for the recovery of the tourism sector because it will make young people and their families want to travel.

She said the domestic tourism market has shown signs of recovery since mid-August after some provinces loosened management of cross-provincial tours.

"The momentum of recovery since late August will help the market rise further during the Mid-Autumn Festival holiday," she said. "The cross-provincial tours will embrace strong growth till the National Day holiday (in early October)."

The government has reminded travelers to stay alert during their trips as the nation still faces great pressure in preventing imported cases.

Wang Huaqing, chief expert on immunization planning at the Chinese Center for Disease Control and Prevention, told a news conference in Beijing on Tuesday that travelers should get to know their destination's situation before departing and not travel to areas with medium or high risks of infection.

Travelers cannot set off on trips if the area they are departing from is classified as a place with a medium or high risk of infection, he said.

"Personal prevention work is of great importance during the trip, including wearing masks, washing hands and social distancing," Wang said.