Travelogue: The Hanging Temple of Datong 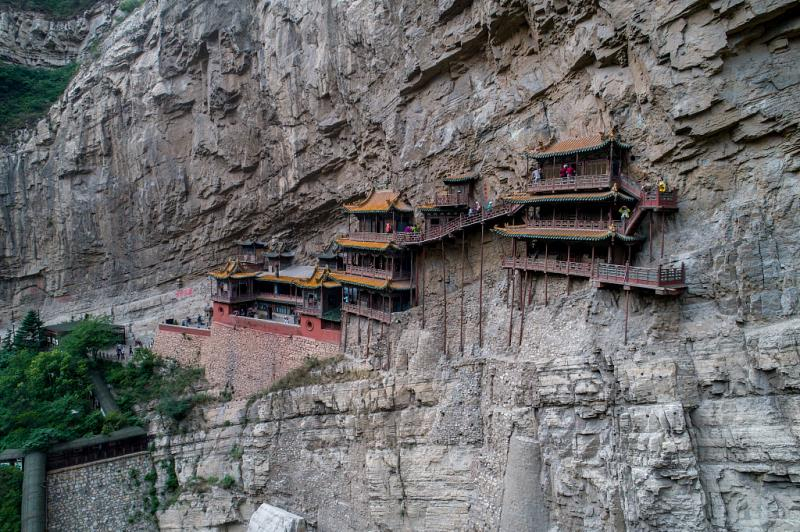 The stunning Hanging Temple of Datong is a 1,500-year-old monastery clutching to a cliff with nothing but wooden beams. ( Photo: VCG)

The Hanging Temple, located around 60 kilometers southeast of Datong, Shanxi Province, is a historical marvel of mechanical theory and human skills.

Legend has it that the temple was constructed by a monk named Liao Ran towards the end of the Northern Wei Dynasty in the late 5th century AD. Built on the cliffs of Mount Hengshan, the buildings are supported by sturdy wooden pillars that are inserted into holes, cut in the mountain body. There are about 40 halls with 80 sculptures, which are vividly carved from copper, iron, terracotta and stone.

Interestingly, this historical site enshrines not just one religion, but three: Buddhism, Taoism and Confucianism are all practiced within the ancient monastery. In the Sanjiao or Three Religions Hall, a Buddha sits alongside statues of Lao Zi and Confucius, the founders of Taoism and Confucianism. This demonstrates that there was harmony among religions even centuries ago in China. As a transit station for people journeying through Datong's remote terrain, the temple catered to anyone, whatever their belief.

With its historical impact and jaw-dropping scenery, the Hanging Temple of Datong is not only an engineering miracle, but also a beautiful testament to the ingenuity of our forefathers.