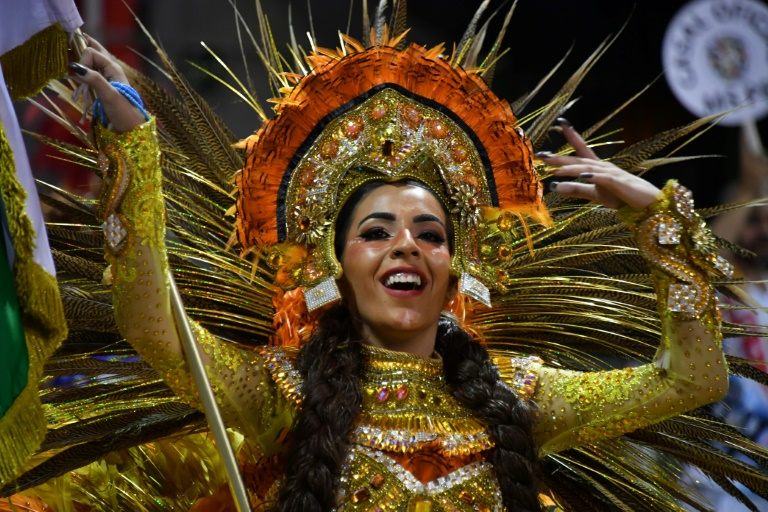 A reveller of the Unidos de Vila Maria samba school performs during the second night of carnival in Sao Paulo, Brazil, at the city's Sambadrome on February 11, 2018. Photo: AFP/Nelson Almeida

Rio de Janeiro's colorful samba parades begin Sunday, a chance for a city struggling with violence and poverty to stage the "greatest show on earth" -- and to attack unpopular politicians.

The countdown was on to the two-night extravaganza, due to begin in the Sambodromo stadium at 9:15 pm (2315 GMT).

Under a sweltering sun, hundreds of thousands of Rio residents and tourists filled the beaches or attended dozens of dancing and costume parties, which are held in the streets every day during the weeks of carnival season.

For a city with samba in its blood the big event, though, was the parade contest to run during the cooler night and then again during the night of Monday-Tuesday.

Thirteen samba schools from the top division were facing off.

Each gets about an hour to parade through the purpose-built stadium with about 3,000 dancers, singers and drummers dressed in over-the-top costumes.

Last year, the contest ended in a draw between Mocidade and Portela.

Organizers may not be exaggerating when they claim the parades to be the world's greatest show.

With breathtakingly complex and dramatic floats, the thunder of drumming, and the heated performances of nearly naked female and male main dancers, there's something for everyone.

However, this year an undercurrent of anger will run through the fun.

Rio de Janeiro is in deep financial trouble and crime in many areas is out of control. Two children were among the dead in shootings last week and a policeman was reported shot dead Saturday in a suburb -- the 16th officer killed already this year.

So although 17,000 police have been deployed for the carnival, large parts of Rio, like Rocinha or City of God, are virtual no-go zones for both police and tourists. Locals in those areas have to survive in the crossfire of drug gangs and the security forces.

To make matters worse for the passionate carnival-going public, Mayor Marcelo Crivella, a devout evangelical Christian, has cut subsidies to the event in half.

Unusually for a mayor, he is not expected to come anywhere near the parades -- a clear sign of his distaste for the bared flesh and boozing.

If he did show up, Crivella would be confronted with a ribbing from the Mangueira school, which has promised to emblazon his name across a float in the form of a huge human backside.

Brazilian President Michel Temer -- said by polls to be the most unpopular president on record -- will not get away lightly either: the Paraiso de Tuiuti school is planning to depict him on a float as Dracula.