TRAVEL Turkey pushes for dialogue with EU on visa-free travel

Turkey pushes for dialogue with EU on visa-free travel 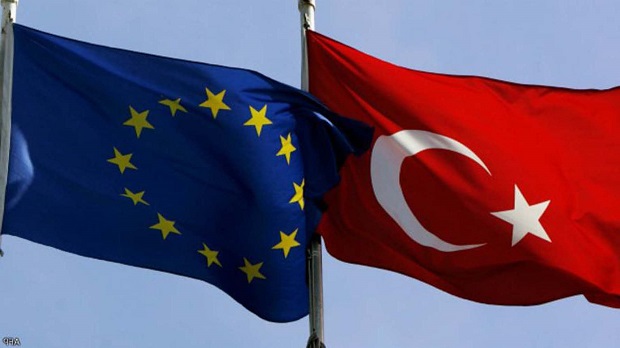 Turkey is pushing for dialogue with European Union on visa-free travel for Turkish citizens in Schengen area amid its attempts to mend ties with EU.

Turkey has accomplished its work in order to fulfill remaining criteria of a total of 72 benchmarks for visa-free travel to Schengen zone of the EU, Ibrahim Kalin told reporters on Wednesday.

He said that Ankara has delivered its position paper to Vice President of the European Commission Frans Timmermans.

The launch of the visa liberalization in 2018 will "accelerate Turkey-EU relations," Kalin said, adding that "from today we can say there is a new process."

The move aims to break a longstanding stalemate on the visa liberalization deal which requires Turkey's fulfillment of 72 benchmarks.

In recent years Turkey has not made any attempt to launch the visa liberalization dialogue with the EU, because the benchmarks require amendment in the country's anti-terror law which Brussels says should be in line with the European standards.

The European Commission demands Turkey change its definition of what constitutes a "terrorism offense," to ensure that security laws are not used to crack down on journalists or academics.

Yet, so far Ankara was not willing to make amendment in the law on fighting terrorism, arguing that it is under by the members of Gulen Movement, which Ankara accuses of a failed coup attempt in 2016, by the outlawed Kurdistan Workers' Party (PKK) and the Islamic State (IS).

The position paper envisages "re-expression" of the current anti-terror law, in a way that will not undermine Turkey's fight against terror, a Turkish diplomat told Xinhua on condition of anonymity.

"Certain arrangements were made in a way that will not pave the way for the weakening Turkey's struggle against terrorism and these were submitted to the EU," the presidential spokesperson said.

The EU-Turkey deal to curb refugee influx into Europe came into force in March 2016.

Under the agreement, Turkey agreed to take back all undocumented migrants, while the EU has Syrian refugees resettled from Turkish camps on a one-for-one basis.

As part of the deal, Brussels promised to introduce visa liberalization for Turkish citizens.

According to the EU, Turkey still has to meet five benchmarks to secure visa-free travel, including reforming the country's anti-terrorism legislation, but Brussels says seven benchmarks have remained to be fulfilled.

Other benchmarks include reforming data protection law, an agreement is to be concluded with the continent's law enforcement agency, Europol, and judicial cooperation and measures to prevent corruption, in line with EU recommendations.

The EU Commission will assess Turkey's position paper in terms of meeting its requirements.

Turkey's move comes after European Council chief Donald Tusk's spokesman said Turkish President Recep Tayyip Erdogan would meet top EU officials next month in Bulgaria, a meeting which Ankara has been waiting for since the last similar gathering in May 2017.

Commission spokesman Alexander Winterstein Wednesday said the talks will focus on "subjects of mutual interest and recent developments in Turkey. That includes obviously the rule of law and fundamental rights."

Although Turkey and the EU have problems in opening new negotiation chapters for accession talks, the EU wants to keep bilateral relations at a certain level, Turkish Foreign Minister Mevlut Cavusoglu said Wednesday, noting that the EU does not want to break off with Ankara.