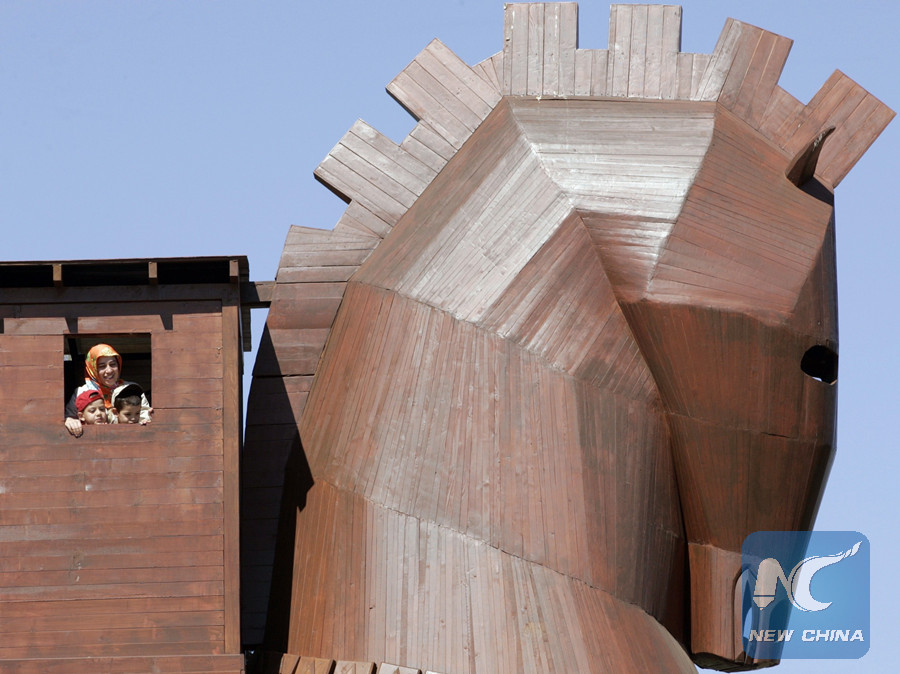 A woman and her children look out from inside the wooden replica of the Trojan Horse in Troy, in Dardanelles, July 11, 2007. Photo: Reuters

Turkey's tourism industry has launched impressive schemes to rely on the rising popularity of the ancient and enigmatic city of Troy to lure more tourists.

In early January, the Turkish government declared 2018 the "Year of Troy" in honor of the 20th anniversary of the ancient city's recognition as a UNESCO World Heritage Site.

The name Troy refers both to a place in legend and a real-life archeological site.

In legend, Troy is a city that was besieged for 10 years and eventually conquered by a Greek army led by King Agamemnon, while as a real ancient city located on the northwestern coast of Turkey, Troy has been widely identified as its famous namesake in legend since antiquity.

The new Troia Museum in western Canakkale Province is expected to draw one million tourists in its inaugural year.

The authorities have invited several Hollywood celebrities to promote the place dating back to classical antiquity as Asia Minor through an international meeting.

The 10,000-square-meter museum will showcase archeological findings of the ancient city, including 24 gold pieces known as the treasures of Helen of Troy, which were returned to Turkey from the US after 125 years.

Hollywood actors starring in the 2004 blockbuster "Troy," such as Brad Pitt, Diane Kruger, Eric Bana and Orlando Bloom, have been invited to visit the museum by Turkey's Tourism and Culture Ministry.

Brad Pitt played the heart-throb hero warrior Achilles in the film, captivating audiences around the world. Turkey hopes to make him the face of the promo campaign.

Several Hollywood big names have so far been enlisted in similar campaigns, including the velvet-voiced Morgan Freeman who appeared in a Turkish Airlines commercial in 2017, after a bad financial year largely attributed to terrorist attacks, a failed military coup in 2016 and then strained ties with Russia over the war in Syria.

The ministry has planned multiple events to mark the "Year of Troy," including war reenactments, symposiums and Trojan-themed performances.

"We are working on it. It is a massive project coordinated by our ministry that will include several big events during the year. We are very exited about it," a source involved in the project told Xinhua.

"The ancient city of Troy is somewhat of a mystery for many visitors and people. 2018 is the year to come to Turkey and explore this city of the ancient times," he added on condition of anonymity.

However, the source did not specify whether if the invited Hollywood stars would accept Turkey's invitations to be part of these festivities, as "Troy" was not filmed in the original site in Turkey, a factor that could deter these Hollywood stars from being present in Turkey.

The International Troy Games are expected to draw athletes around the world to compete in multiple events at the historic site before domestic and foreign spectators, especially history lovers.

The city of Ancient Troy was declared as a World Cultural Heritage Site by UNESCO in 1998. It is the historic setting of the Greek Trojan War, described in detail in Homer's epic poems as "The Iliad" and "The Odyssey."

In 1915, Ottoman troops defeated the British and French intruders in the battle of Gallipoli during World War I.

Both battle sites in Turkey's Canakkale Province, located around the Dardanelles Straits, draw hundreds of thousands of visitors each year, especially descendants of the ANZAC corps, the Australians and New Zealanders who served and died in the bloody battle.

Ertugrul Ozkok, a famous columnist and journalist, even suggested renaming Canakkale after its ancient name of Troy, an idea which has provoked some controversy among nationalists who rejected such a radical initiative.

Turkey's tourism revenues jumped nearly 20 percent to 26 billion US dollars in 2017, boosted by a five-fold surge in the number of Russian tourists, data showed in late January, as improving diplomatic ties with Moscow helped the industry.

The 2016 diplomatic crisis between Turkey and Russia, after Turkey shot down a Russian plane over Syria, hit the tourism industry and the economy, incurring an estimated 8 billion dollars of lost revenue, according to experts.

"There is a 70 percent increase in the number of bookings from foreign travel agencies for this year. We expect a record in numbers in 2018," Tourism Minister Numan Kurtulmus said.

Turkey has also other schemes to lure tourists to the country such as stretching its muscles toward Asia and China. China has declared 2018 as Turkey Tourism Year, a move expected to boost ties between the two countries.