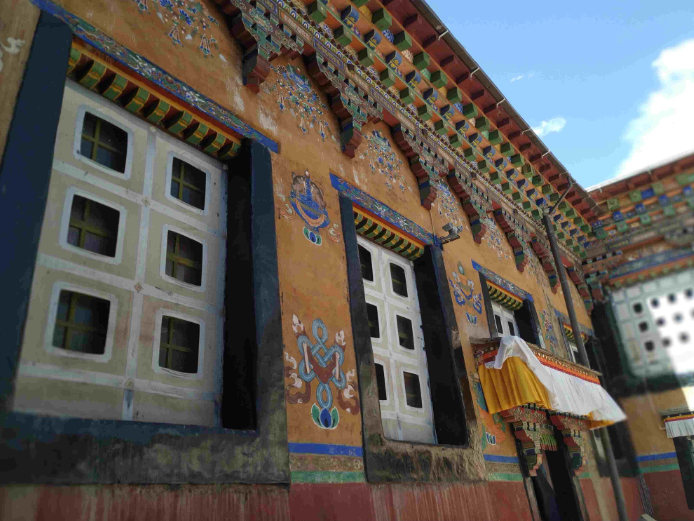 The walls of the inner court of the Sakya Monastery feature bright colors and Buddhist motifs. (Photo: CGTN)

The path of enlightenment for the history of the Tibet Autonomous Region goes through a Buddhist temple some 4,300 meters above sea level.

Nestled on a hill, the Sakya Monastery is the seat of the Sakya sect, one of the four major schools of Tibetan Buddhism, and an oasis of knowledge sitting in the middle of barren mountains and surrounded by scattered villages some 150 km from Shigatse, the second largest city in Tibet.

The Zhongqu River divides the monastery into two parts. The northern temple was built in 1073 on a hillside and expanded into a grand-scale complex with reportedly over 100 buildings before the turbulent 1960s wreaked havoc on it. Today, what remains of the construction is a two-story hall overlooking the southern temple, which was erected in 1268.

There, within the distinctively red and gray outer walls, lies a trove of literary treasures – sutras, scrolls, and classics. Over 40,000 volumes of scriptures and books, handwritten in Tibetan, Sanskrit, Chinese and Mongolian, tell the story of Tibet through the prism of philosophy, opera, poetry, medicine, and geology, among other disciplines.

Such an astounding archive of tomes, coupled with a colossal collection of artifacts, has earned the monastery the nickname the "Second Dunhuang," in reference to the city in northwest China's Gansu Province famed for its grottoes featuring Buddhist murals and manuscripts.

Past the mammoth entrance of the complex, and through a tunnel lined on both sides with copper prayer wheels is a court leading to the main prayer hall.

As you cross from the shaded passage to the sunny space, a carnival of colors greets your eyes: Tibetan prayer flags with their five characteristic colors (blue, white, red, green, and yellow) are wrapped around a pole, while traditional motifs adorn the brightly painted walls. Meanwhile, your auditory senses are treated to a mishmash of sounds that blend together harmoniously – chanting monks, chattering visitors and cooing pigeons flapping their wings.

The praying space is a capacious room held by 40 poles and dotted with large bronze statues. There, the soothing melody of monks and visitors reciting sutra verses is pierced every so often with the hollow sound of a conch shell being blown. Dharma, the spiritual teachings of the Buddha, hangs in the air, also perfused with the pleasantly musty smell of aged paper.

Behind the hall, dimly lit with sun rays and burning butter lamps, is one of the main highlights of the monastery – a precious library consisting of a single bookshelf extending from the floor to the ceiling.

It is 57 meters long, 11 meters high and reportedly houses more than 10,000 scriptures stacked inside 464 grids. Legend has it, the single wall could hold up the whole monastery by itself even if the other fortifications crumbled.

But time is an unforgiving force. The towering walls might have guarded the temple as one century gave in to the next, but the artifacts have not been as immune. The digital era, however, has thrown a lifeline to the invaluable articles at the Sakya Monastery as notebooks and scanners turned obsolete.

An archiving project has been underway since 2015, examining 26 types of ancient artifacts, including frescoes, porcelain items and instruments, and digitally recording their details, giving them a new lease of life in the 21st century.

To say the monastery is just a place of worship is an understatement.

The edifice is so many things at once. It's a sanctuary where pious Buddhists find inner peace among sacred statues and thangkas (Tibetan silk paintings), and a living fossil for historians on a quest to put the history of the region under a magnifying glass. To conservators, it's a museum of relics from a bygone era threatened by the ravages of time. Meanwhile, tourists looking for an off-the-beaten-path adventure will find a cabinet of curiosities awaiting them there.