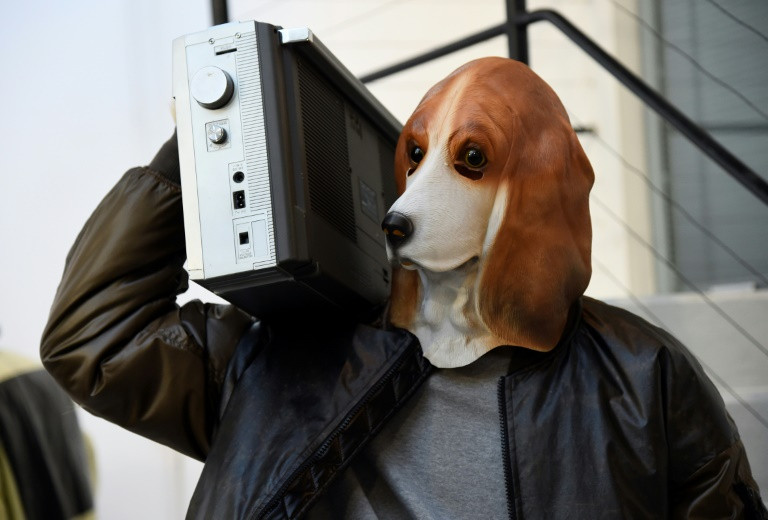 Creations including this one by Julien David added an animalistic, post-Weinstein touch to Paris men's fashion week. Photo: AFP

Thigh-high Ugg boots, post-Weinstein men paraded as dogs, pigs and dinosaurs and a tartan army of plaids and check -- as Paris men's fashion week ends Sunday, we look back on the big trends and talking points:

This was the week when the fashion industry had its Weinstein moment with allegations that two star photographers had harassed and assaulted models.

Julien David, Walter Van Beirendonck and Comme des Garcons caught the air of the times by putting dog, pig and dinosaur heads on their models, while the American Rick Owens ripped his "clothes in anger... It's draining to watch unhealthy cycles repeat themselves, behaviourally and historically, and it is hard to suppress a howl of rage," he said, with his own president also in his sights.

Sacai designer Chitose Abe and French brand Etudes also took a stand against Donald Trump by using the New York times "The Truth is Hard" slogan on their clothes to support media outlets Trump has accused of "fake news".

They have been called "Australia's joke on the rest of the world", and many thought they had been confined to fashion Alcatraz. But no, Ugg boots are back and this time they are thigh-high.

Uber hip Y/Project designer Glenn Martens tried to turn the sheepskin slippers into fetish objects of desire -- although the jury is out.

Martens described wearing them as putting your "feet in warm butter" and said bringing them to the crotch "keeps your thighs as well as your feet warm".

More conventional Uggs turned up in the Sacai show with designer Abe admitting "I wear them myself in winter... even outdoors."

- Check out the tartan -

Sacai gave their take on tartan, a dominant winter theme which made an appearance in a slew of collections. Photo: AFP

There was no doubting the dominant pattern for next winter. The skirl of tartan and check ran through three quarters of the Paris collections, making fashion week sometimes feel like one extended Burn's Night.

From street style brands like Facetasm and Andrea Crews to White Mountaineering, Henrik Vibskov, Sacai, Agnes b, Thom Browne and the romantic classicism of Alexander McQueen, a tartan army was one the march.

No more so than with the "Prince of Prints" Dries Van Noten, whose beautiful use of Stewart tartan may have finally rescued it from clutches of Bay City Roller kitsch.

With so much to be money to be made, it is no surprise that fashion keeps insisting that men need the equivalent of handbags. Rare was the show this week that did not have a model holding a manbag, swinging a sack or shoulder bag slung nonchalantly over one arm.

Even Van Noten, who is normally above such things, included one. While a cat-shaped, highly strokable clutch bag was also spotted on one front row, Loewe won the originally prize for its elephant-shaped manbag which sits on the knee. Clearly a must for the man who cannot fit everything into his trunk.

Whether it is the influence of the television series "Peaky Blinders" or to man-up more fey androgynous looks, robust boots walked all over every other form of footwear on the catwalk. Dr. Martens were omnipresent with even Dior paying homage with their own versions of the butch work boots, while Rick Owens won many new fans with his suede "hover bovver" boots with extended soles.

Boots were almost the rule under well-cut of suits, with John Galliano debuting a male version of the Tabi boot at Margiela as did wunderkind Demna Gvasalia rather cheekily at Vetements.

And Officine Generale went hell for leather with their vintage Mexican police boots, which designer Pierre Maheo said "became a reference for narco culture when many (officers) crossed over to the dark side."