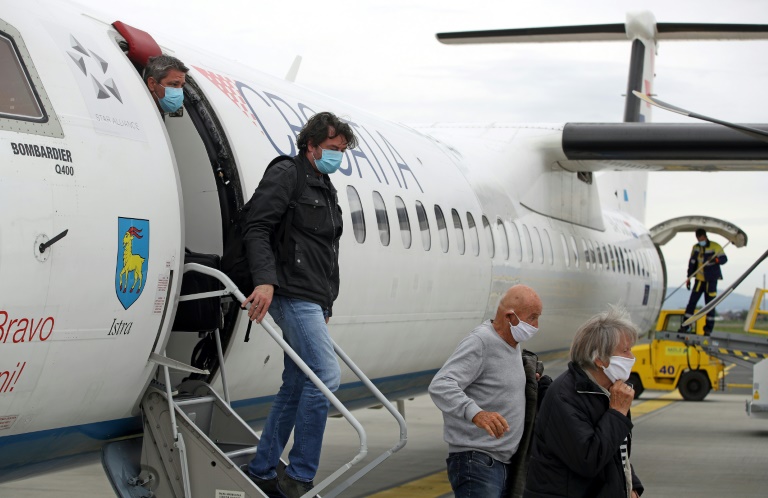 A protocol drawn up by an international task force is intended to serve as a "framework" for assuring the safety of passengers and workers on planes and at airports, as the coronavirus-battered airline industry. (Photo: AFP)

Mask wearing, temperature controls, disinfection of aircraft: the International Civil Aviation Organization on Monday published a series of health recommendations for the pandemic-hit airline industry as it relaunches air travel.

The protocol was drawn up by an international task force formed by the Montreal-based ICAO with the help of other UN agencies like the World Health Organization and the powerful International Air Transport Association (IATA).

"These guidelines will facilitate convergence, mutual recognition and harmonization of aviation COVID-19 related measures across the globe," Philippe Bertoux, France's representative on ICAO's board, which led the "task force" debate, said in a statement.

The changes being suggested are the most important for air travel since security measures put in place after the September 11, 2001 attacks on the United States.

The recommendations -- adopted Monday evening by the ICAO's executive committee, are intended to serve as a "framework" for assuring the safety of passengers and workers on planes and at airports.

On their arrival at airports, travelers should present a health certificate and undergo an initial temperature check, under the guidelines.

Online check-in before arriving at the airport should be given priority, and passages through security should be re-thought to limit physical contact and waiting in lines.

Mobile tickets are advised, as well as other forms of no-contact technology, such as facial or eye scans.

"This will eliminate or greatly reduce the need for contact with travel documents between staff and passengers," the protocol said.

Passengers are encouraged to travel as light as possible, with just one small piece of hand luggage. Newspapers and magazines will no longer be allowed on board, and duty-free sales will be limited.

The wearing of a mask or face covering should be obligatory inside aircraft and terminals, where physical distancing of at least three feet (one meter) should be respected.

Terminal access will be limited to passengers and their companions, such as those accompanying disabled travelers, and airport personnel.

Aboard planes, passengers should wear masks, move as little as possible within the cabin, and not line up outside toilets to lessen the risk of infecting other passengers. People will be assigned specific toilet stalls on the plane in relation to where they are seated.

Flight attendants will be provided with personal protective equipment that could include visors, gloves and medical masks.

But the ICAO does not advocate leaving every other seat open to assure physical distancing, a restriction that the airline industry sees as a threat to its profitability.

The organization, nevertheless, asks passengers to remain as far from one another as possible.

It also advocates that food on board be pre-packaged and that aircraft be regularly disinfected.

Temperature checks should also be taken on a flight's arrival.

The measures aren't obligatory but they are the product of a broad consensus that imparts "an authority that will make them a global reference for the first time on this issue since the start of the COVID-19 crisis," said Bertoux.

"These measures will facilitate a safe and sustainable return of the air travel," he told AFP.

To reopen after having been grounded for months and brought to its knees financially, the airline industry is pressing for rules to be harmonized to reassure passengers and states that have closed their borders in an attempt to halt the spread of the virus.

The ICAO estimates that the pandemic will reduce the number of air passengers by 1.5 billion by the end of the year.