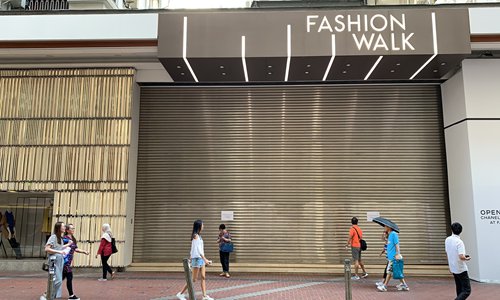 The unemployment rate in the tourism and catering industries jumped in Hong Kong amid violent movements during the past three months, according to figures released by the Census and Statistics Department (CSD) in Hong Kong on Friday. Declining tourism from the Chinese mainland is a major reason for the trend, experts said.

The unemployment rate for Hong Kong's consumption- and tourism-related industries spiked to 4.9 percent, the highest in more than two years. The catering business was among the worst-hit with the unemployment rate in the segment soaring to 6 percent from July to September, reaching a six-year high.

The overall labor force also saw a slight decrease over the period, dipping by about 8,500 from 3 984 200 to 3 975 700 during July to September compared with the June-August period.

The overall unemployment rate stood flat with the figure from June to August, coming in at 2.9 percent, according to the CSD.

Secretary for Labor and Welfare Law Chi-kwong noted that the worsening economic conditions will put increasing pressure on the local labor market in the short term.

The decrease in the number of visitors from the Chinese mainland, who have been a major driver in tourist consumption in Hong Kong, has been a major reason for the shrinking employment in tourism and related segments, Liang Haiming, a Hong Kong-based economist, told the Global Times.

The number of visitors in Hong Kong from the mainland has plunged amid the ongoing violent protests. According to the Hong Kong Tourism Board (HKTB), in August visitors from the mainland totaled 2.78 million, dropping 42.3 percent compared with the same period last year. Visitors from other sources witnessed a sharp decrease of 24.5 percent year-on-year.

"The drastic decrease in the number of tourists not only has a direct impact on sales, but also on rents and overall investment in the industry," Liang said. "With less demand and money in the industry, the longer-term impact of the protests has begun to show."

Liang also noted that as an industry that takes up about 5 percent of overall GDP in Hong Kong, the shrinking tourism segment might affect the overall economy if the violence is prolonged.

"I used to go to Hong Kong for shopping or entertainment over the weekend, but now I only go there when absolutely necessary because of safety concerns," an interviewee surnamed Zhou, who is based in Hong Kong's neighboring city Shenzhen, told the Global Times. "I especially avoid going on weekends when protests often occur."

"Tsim Sha Tsui is probably the top shopping center among tourists, and it used to be swamped by tourists even at midnight," a resident in Hong Kong surnamed Zhang told the Global Times. "But because of the protests the area feels much more empty, with shops closing at around 8 pm with very few customers."