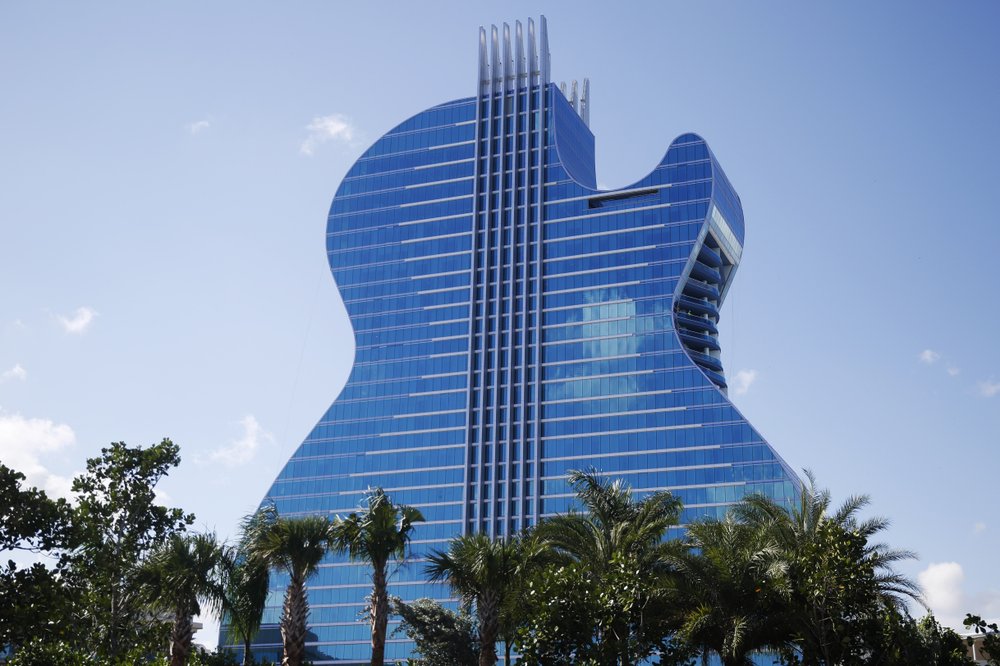 The guitar shaped hotel is seen at the Seminole Hard Rock Hotel and Casino on Thursday, Oct. 24, 2019, in Hollywood, Fla. (Photo: AP)

It looks like a rock ‘n’ roll guitar that Led Zeppelin’s Jimmy Page would have played. But this one is 450 feet (137 meters) tall and is a light-beam hotel that the Seminole Tribe wants to become South Florida’s latest tourist destination.

The Guitar Hotel had its grand opening Thursday on the tribe’s land in Hollywood, once only a trailer park and some smoke shops. It’s the latest step in the Seminole Hard Rock empire, which includes naming rights on the Miami-area stadium where the 2020 Super Bowl will be played.

“It really is special,” said Mitchell Cypress, vice chairman of the Seminole tribal council. “The Seminoles now are known throughout the world.”

It’s a unique addition to South Florida’s tourist landscape and no hotel is like it in the world. It has more than 600 rooms and at night, beams of light will mimic the strings of the guitar.

Locally, people stop along the roadsides to take photos. It’s visible to travelers on airliners headed into Fort Lauderdale.

The $1.5 billion project also has a refurbished venue for concerts and other events, starting with Maroon 5 on Friday and continuing with artists such as Sting and Billy Joel. It has a giant pool and lagoon, retail shops, restaurants, and of course gambling.

Jim Allen, CEO of Hard Rock International, said the brand already is filled with guitars, so why not a hotel?

“Wouldn’t it be really cool if we could design a hotel shaped like a guitar?” Allen remembers saying. “Before, we were more of a locals facility. Now, we have the ability to market this internationally.”

As for the guitar shape, Allen said it’s meant to be generic and not necessarily the Gibson Les Paul made famous by Page and others. But he added that Hard Rock has relationships with both Gibson and Page, and the hotel and casino features many Led Zeppelin artifacts.

“When we present the Hard Rock brand on a global basis, it literally starts with Jimmy Page saying ‘It was a cool idea then and it’s a cool idea now,’” Allen said.