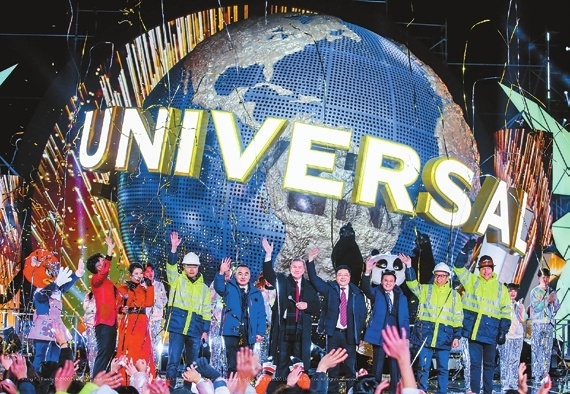 UNIVERSAL Beijing Resort announces the completion of major construction on the theme park, and is now moving full-speed ahead in preparation for the highly anticipated grand opening in 2021.

Taking to the stage at this year’s Beijing Radio and Television (BRTV) Global New Year Ice and Snow Night Gala, Universal Beijing Resort dazzled viewers with a splendid view unveiling parts of the resort’s signature attractions and landmarks, as well as extraordinary themed programs with popular IP characters on stage.

It was a special occasion for Universal Beijing Resort representatives, including executives and construction teams, as they announced the major milestone on stage together, and expressed sincere respect and gratitude to more than 100,000 construction workers for their concerted efforts day and night.

Universal Beijing Resort will feature the Universal Studios Beijing theme park, the Universal CityWalk Beijing retail, dining and entertainment complex and two hotels when it opens, and featuring an experience that is unique to China — representing a collection of Universal’s most popular attractions from around the world as well as specially themed experiences reflecting China’s rich cultural heritage.

The seven spectacular themed lands include Kung Fu Panda Land of Awesomeness, Transformers: Metrobase, Minion Land, The Wizarding World of Harry Potter, Jurassic World Isla Nublar, Hollywood and WaterWorld, bringing some of the most beloved films’ and pop culture’s most compelling stories and characters to life. Guests will enjoy wonderful adventures with customized storylines and experience the infinite extraordinary journey the resort has to offer.