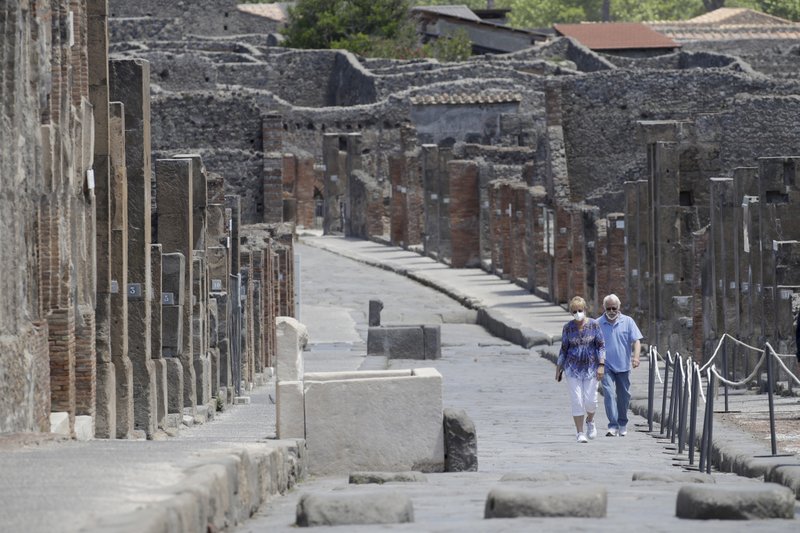 Colleen and Marvin Hewson, from the United States, visit the archaeological site of Pompeii, near Naples, southern Italy, Tuesday, May 26, 2020. The American couple waited a lifetime plus 2 ½ months to visit the ancient ruins of Pompeii together. For Colleen and Marvin Hewson, the visit to the ruins of an ancient city destroyed in A.D. 79 by a volcanic eruption was meant to be the highlight a trip to celebrate his 75th birthday and their 30th anniversary. They were among the only tourists present when the archaeological site reopened to the public on Tuesday after the national lockdown to prevent the spread of COVID-19. (Photo: AP)

An American couple waited a lifetime plus 2 ½ months to visit the ancient ruins of Pompeii together.

Colleen and Marvin Hewson, retirees from Michigan, were first in line when the archaeological site reopened to the public Tuesday following Italy’s coronavirus lockdown. Their long-delayed visit capped an unlikely adventure that had stranded them in modern Pompeii, a small tourist town, since early March.

“We have been patiently waiting since then for the ruins to open,” Colleen Hewson said as the couple got the chance to stroll through the ruins of the Roman city destroyed in A.D. 79 by a volcanic eruption, trailed by journalists capturing another milestone in Italy’s reopening.

“Here we are, we finally made it inside. It only took 2 ½ months,” Marvin Hewson added.

For the Hewsons, seeing Pompei was meant to be the highlight of a trip celebrating his 75th birthday and their 30th wedding anniversary. Marvin Hewson, a history buff, had visited once while serving in the U.S. Navy in the 1960s and always vowed to get back; the trip was his wife’s gift to him.

The couple from Clinton Township, Michigan, which is near Detroit, arrived in Rome on March 5 for the vacation of a lifetime, her first time overseas. By the time they made it to the gates of Pompeii several days later, the popular tourist site was closed and Italy was under lockdown due to the coronavirus epidemic that broke out more than 700 kilometers (500 miles) to the north.

Attempts to book flights out failed, and they resigned themselves to life under lockdown. Back in the United States, their four adult children relaxed when they realized their parents were far from the epicenter of Italy’s virus outbreak and in good local hands.

“We made a great connection with our Airbnb host family,” Colleen, 63, said. The host, Fabio Sposato, translated news for her and her husband, and helped keep them busy, tasking them with picking oranges and lemons from trees near the condominium where they stayed and teaching them to make limoncello.

“It helped to pass the time,” Marvin said.

Under lockdown, they fell into a routine, walking more than 7,000 steps a day, often to a grocery store near the archaeological site that allowed time to sit on a bench and gaze upon the ruins, “wishing we could be inside,” Colleen Hewson said. In all those weeks, “our Italian never got better,” she quipped, and they would use charades to communicate things they were looking for in the grocery store.

The couple was leaving Pompeii on Tuesday for Rome, where they planned to spend a couple of days sightseeing before returning home to Michigan at long last. Since Italy’s restrictions on movement have eased, Sposato hosted the couple for dinner with his family and drove them to the Amalfi coast.

“We took care of them as if they were our parents,” Sposato said. “We did what we could to make them comfortable respecting the restrictions that were in place.”

The couple said they feel lucky to have been able to spend the lockdown in such a beautiful setting. From their condominium’s rooftop, the couple could see Mount Vesuvius to one side, and the island of Capri to the other.

“We looked at real estate. It would be a dream,” Marvin said. “We saved a lot of money because all of the stores were closed. We really are thinking of coming back.