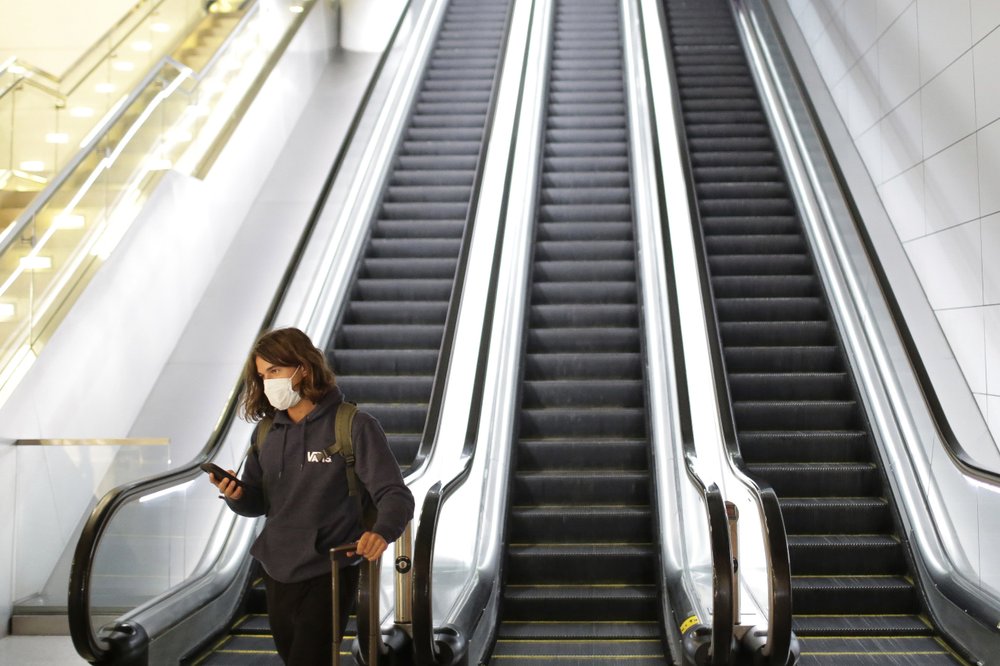 A traveler wears a mask while waiting for a flight at Dallas Fort Worth International Airport in Texas. (Photo: AP)

Amazon and other big companies are trying to keep their employees healthy by banning business trips, but they’ve dealt a gut punch to a travel industry already reeling from the virus outbreak.

The Seattle-based online retail giant has told its nearly 800,000 workers to postpone any non-essential travel within the United States or around the globe. Swiss food giant Nestle told its 291,000 employees worldwide to limit domestic business travel and halt international travel until March 15. French cosmetics maker L’Oréal, which employs 86,000 people, issued a similar ban until March 31.

Starbucks Corp. on Wednesday turned its party-like annual meeting scheduled for March 18 in Seattle, into a virtual affair. The event, which drew 4,000 shareholders last year, was supposed to be held at a theater in downtown Seattle. A virus cluster has emerged in Washington state, however, with nine deaths reported.

Other companies, like Twitter, are telling their employees worldwide to work from home. Google gave that directive to its staff of 8,000 at its European headquarters in Dublin on Tuesday.

Major business gatherings, like the Geneva International Motor Show and the Mobile World Congress in Barcelona, have also been canceled.

On Tuesday, Facebook confirmed it will no longer attend the South by Southwest conference in Austin, Texas, which is scheduled to begin March 13. And the 189-nation International Monetary Fund and its sister lending organization, the World Bank, announced they will replace their regular spring meetings in Washington — scheduled for mid-April — with a “virtual format.”

“I wasn’t worried about getting sick. I’m a healthy 46-year-old man with no preexisting conditions,” Ottaway said. “My only worry was getting stuck in Asia or quarantined after returning to the US And I’d hate to be a spreader of the virus.”

The cancellations and travel restrictions are a major blow to business travel, which makes up around 26% of the total travel spending, or around $1.5 trillion per year, according to the Global Business Travel Association.

The association estimates the virus is costing the business travel industry $47 billion per month.

“It’s a big deal,” said Henry Harteveldt, a travel industry analyst in San Francisco who estimates that airlines get 55% of their revenue from business travelers, since they’re more likely to sit in pricier business or first-class seats.

“On a long-haul flight to Europe or Asia, a business-class traveler can be five times more profitable than someone in coach,” Harteveldt said.

Figures from the Airlines Reporting Corp. indicate that airline ticket sales fell about 9% during one week in late February, compared with a year earlier.

Hotels are also worried about declines in business travel. In the US alone, hotel bookings for business travel were expected to reach $46.8 billion this year, according to Phocuswright, a travel research firm.

In the week through Feb. 22, San Francisco saw an 11% decline in hotel occupancy, according to STR, a hotel data company. AT&T, Verizon and IBM were among the companies that pulled out of the city’s RSA cybersecurity conference, which began Feb. 24.

Backing out of industry events can be a tough call for businesses. Luke Sorter, owner of Pavel’s Yogurt, spent last weekend agonizing over whether his company should attend Natural Products Expo West, a major industry gathering in Anaheim, California.

Sorter spent nearly $20,000 on conference fees and travel expenses, but then rumors began circulating that nearly all the major retailers he was hoping to pitch were pulling out.

“This was going to be our big push to make some sales and open up some new accounts, and we were really disappointed because all of the major buying groups had pulled out of the show,” said Sorter, whose San Leandro, California-based company pulls in about $1.2 million to $1.5 million in revenue per year.

On Tuesday, Expo West announced it would be postponed until a later date.

“I was relieved because it just didn’t seem safe to put 50, 60, 70,000 people in a building together and the whole show is predicated on sharing and sampling food and handshakes, and person-to-person interaction,” Sorter said.

Some experts say it’s smart for companies to curtail travel before things get worse.