TRAVEL Visit the world of ‘Avatar’ during Chinese New Year

Visit the world of ‘Avatar’ during Chinese New Year 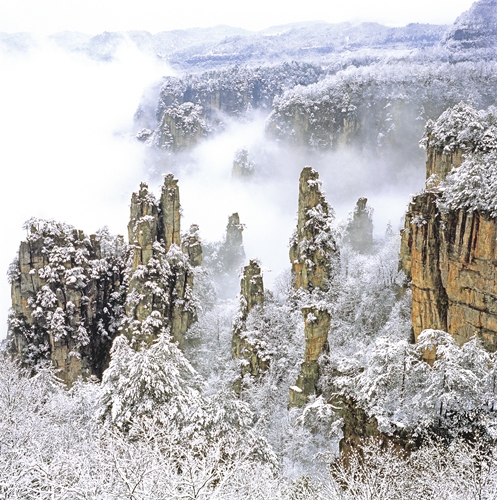 The upcoming Spring Festival is not only an important holiday for family to get together, but also a long and ideal holiday for people to travel around. Those who plan to travel during the holiday and are interested in visiting places where some famous movies were once filmed can consider Zhangjiajie, a beautiful and popular place located in Central China's Hunan Province.

Zhangjiajie is not only famous for its peculiar mountain shapes and landforms, but also because parts of the hit movie Avatar were once filmed there in 2009. It contains the Zhangjiajie National Forest Park, which is a UNESCO World Heritage Site and an AAAAA scenic area by the China National Tourism Administration.

The number of tourists visiting the region from all over the world increased significantly after Avatar revealed Zhangjiajie's stunning beauty to the world. Now one of the world's most famous tourist attractions, Zhangjiajie has recently launched a special "Avatar Journey" to take visitors back to the scenes in the movie.

The South Pillar of Heaven is one of the most impressive natural sceneries that appears in Avatar. The unique appearance of this majestic natural stone pillar jutting out of the ground is due to its sandstone makeup. The formation of this landform is the result of the slow and intermittent uplift of the Earth's crust plus the long-term water erosion of the stones.

Zhangjiajie has more than 3,000 of these rocky cliffs rising from the ground. Each one is unique and integrate different characteristics such as square-shaped mountains, sheer cliff faces and residual forests. Heights range from just a few dozen meters to a few hundred meters. This forest of giant pillars is truly a magical place created by nature.

The cranes of Yangjiajie

Located in the northwestern area of the Zhangjiajie National Forest Park, Yangjiajie is famous for its white crane zone. White cranes often stop to rest on the hilltops and branches of the zone. In China, the white crane, also known as the fairy crane, is an auspicious symbol. Many local people say that everyone in the area is blessed due to the birds' presence and if they ever decided to relocate, natural disasters and plagues would surely come. For this reason, the locals go out of their way to never disturb the birds and ensure they have a good living environment.

The best times to visit the place is in the early morning and late afternoon. When the sun begins to rise in the east and the morning mist is disappearing, the white cranes call to each other as they prepare to leave their nest. Then they spread their wings, and fly off into the sky in flocks. When dusk arrives, visitors can enjoy the majestic sight of them returning from the twilight sky.

Besides the white cranes, Yangjiajie also has uniquely shaped peaks and cliffs as well as waterfalls. The altogether 110 scenic spots in Yangjiejie make for the perfect place to get lost in natural beauty.

If you are very interested in spending the holiday there, it will be best to book train or plane tickets as soon as you can since tickets are sure to sell out quickly due to the Spring Festival travel rush. Staying there for two to three days in a local guesthouse is a good choice. Zhangjiajie has a lot of natural scenic spots, so it would be best to travel light since you may need to do a bit of steep hiking. The weather in the mountains can change without a moment's notice, so make sure you pack rain gear and a jacket.