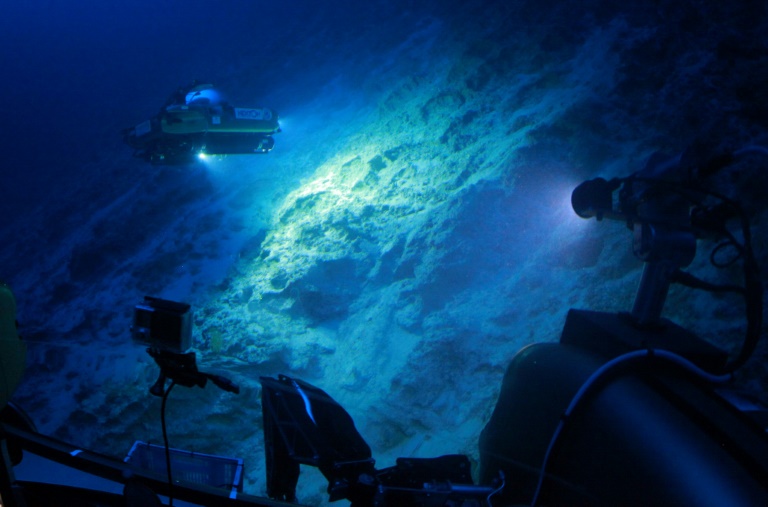 A handout picture from 2016 released by ocean research institiute Nekton shows a submersible craft working above the seabed off the coast of Bermuda (Photo: AFP)

A mission to explore uncharted depths in the Indian Ocean was launched on Wednesday, hoping to discover hundreds of new species and find out what impact plastic is having way below the surface.

The First Descent expedition, led by British-based ocean research institute Nekton, is set to send submersibles as deep as 3,000 metres off the Seychelles from March to test the health of the ocean.

The project was launched at the Commonwealth headquarters in London.

"The mission is focusing on 30 metres down to 3,000 metres. This is where you get the peak diversity of species," said Professor Alex Rogers, part of the scientific team.

"In the Indian Ocean, the deeper zones are almost completely uninvestigated. We simply don't know what's there."

The Oxford University deep sea biologist said that the mission could find 100 to a thousand new species, including lots of new corals.

"The more you zoom in, the more diversity you're going to find. I'm really confident that we'll discover many new species," said Rogers.

"The ocean is suffering serious degradation from overfishing, pollution and climate change. It's critically important to understand how life is distributed in the oceans now, so we can make decisions better to manage the oceans."

The Ocean Zephyr mothership is on its way from Bremerhaven in Germany to the Seychelles. It will be home to 50 scientists, engineers and technicians during the project.

Its two submersibles will take 17 different research tools and technology into the deep, along with 18 cameras to create the first three-dimensional maps of deep sea ecosystems. Some of the dives will be broadcast live.

Ocean campaigner Emily Penn, a Nekton trustee, said the expedition could shed light on the impact of plastic thousands of metres below the surface.

"We really don't know what's going on in the deep ocean when it comes to plastic," she said.

"We know eight million tonnes of plastic is going into the ocean every year and we're only finding a fraction of it on the surface. The big question is: where is all the rest of it going?

"We expect that it's mostly sinking -- but until we actually go there, we don't know how much is down there and the impact it might be having."

The Commonwealth, a 53-country grouping that unites nations like Britain, India, Canada and Nigeria with small states like Tonga and the Seychelles, has focused on managing climate change in recent years as many of its members are vulnerable, low-lying island nations.

"Our countries are dying, so we have no choice," said Commonwealth Secretary-General Patricia Scotland.

"We face an existential threat as a result of the changes in climate.

"Unless we map and understand better what is in our oceans, we may be doomed to repeat some of the mistakes we made on land.

"This is enabling us to get the data to make properly informed choices."

Nekton chiefs said there were better maps of Mars than the seabed, 95 percent of which remains unexplored.

It is hoped that the data produced by the mission will enable scientists to model where similar observations are likely to be found in the oceans, and provide data on which to base conservation efforts.