What it’s like to do the Everest Base Camp trek 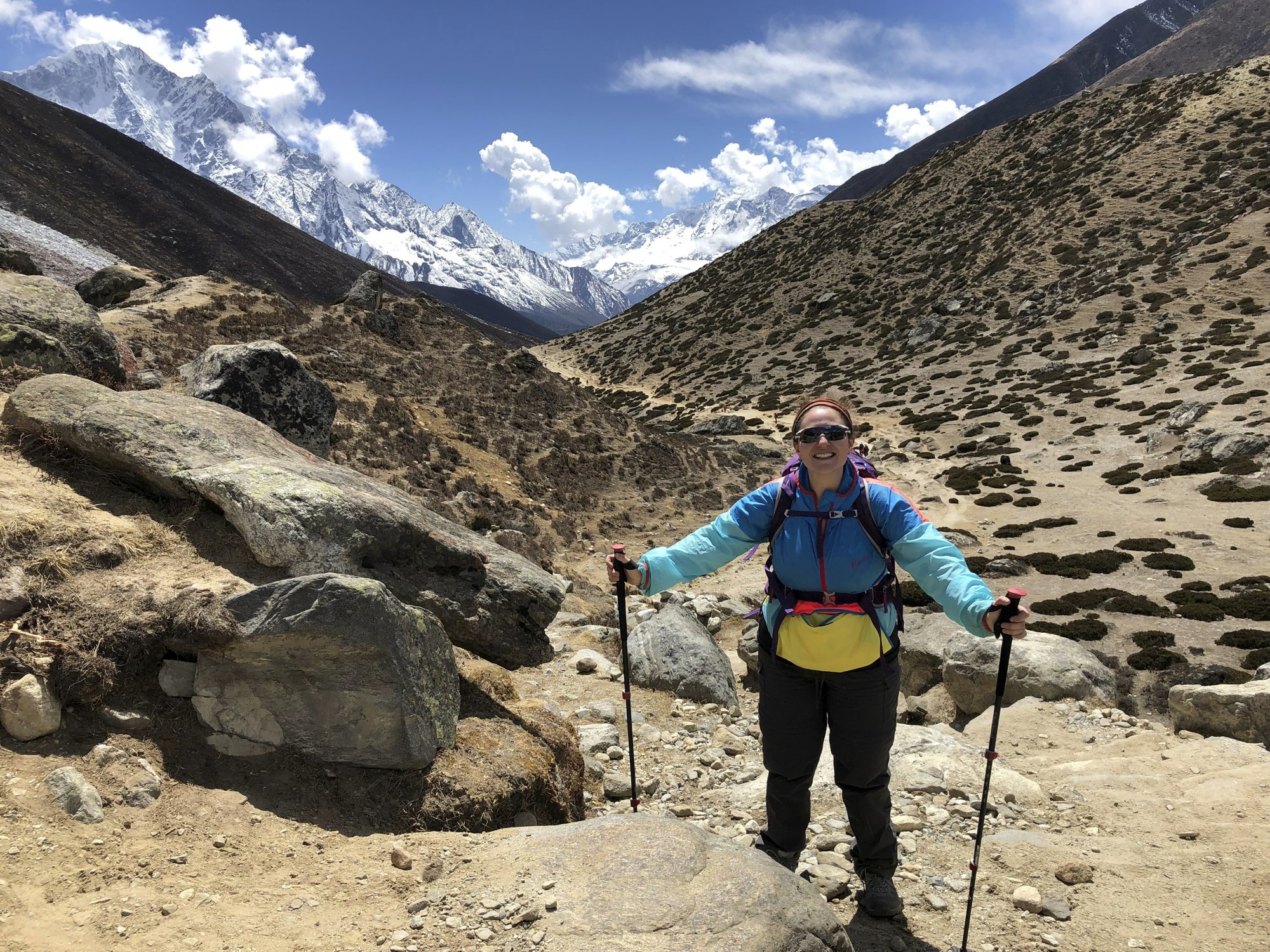 Whenever I told someone I was planning to climb to Mount Everest Base Camp this spring, I received the same shocked and wide-eyed response: “Be careful!” While that’s good advice for any adventure, it was difficult to convince friends and family that this trip would not at all be the same thing as actually climbing Mount Everest.

Instead, the Everest Base Camp Trek provides an opportunity for regular hikers like me to tackle a feasible portion of one of the most iconic climbs in the world.

Base Camp is located at 17,600 feet, well below the peak of Everest, which is 29,000 feet. Base Camp is where those planning to summit spend weeks acclimatizing and preparing for their journey. It is also the furthest you can go using only your legs, before other equipment like ropes and ice picks get involved.

Our eight-day journey to Base Camp began at 9,300 feet, in the small Nepalese mountain town of Lukla. There are no roads to Lukla. It is accessible only by a 30-minute plane ride from Kathmandu. When we landed, I was shocked to find the area crowded and bustling, filled with locals selling trinkets and outdoor gear, and what felt like hundreds of trekkers preparing for their climbs.

From Lukla, we wound our way up muddy paths and across dangling suspension bridges, stepping aside for herds of yak and dzo (yak/cattle hybrids) as we walked further and further into the most remote area in which I have ever hiked.

Yet, it didn’t feel that way. Small towns continued to greet us all the way up. There were lodges to stay in. There were restaurants and bars. I have photos at the world’s highest Irish pub and the world’s highest bakery. In one of the larger towns, Namche Bazaar, at about 11,200 feet, there was even a North Face store. In these towns, dozens of miles from the nearest road, all food and supplies are brought in by helicopter, porter or animal.

In addition to breathtaking, 360-degree views of the Himalayas, elaborate Buddhist monuments lie along the entire route. Every day along the trail we saw massive, intricately painted boulders and colorful stupas (structures meant to bring good karma) wrapped in multicolored prayer flags. At one point, we even toured a large, fully functioning monastery.

The terrain itself is not as difficult as you’d expect. Anyone in good physical shape could do it, and I have done many other hikes that I found more challenging. We still climbed several thousand feet per day, but the inclines were relatively gradual. This trek, instead, should be known for its panoramic views and the unique experience of hiking through these remote mountain towns.

Of course, the trip is not without risks, but they lie in unexpected places. The flights to and from Lukla are the most dangerous part of the journey. The Lukla airport has long been considered one of the most dangerous airports in the world — and in fact, a fatal crash occurred while we were there. I tried to push the knowledge of the airport’s dangers to the furthest recesses of my mind as I boarded a tiny propeller plane bound for that very place.

The plane ride is beautiful, with mountains on all sides, but the landing is enough to put even the fiercest adventurer on edge. A standard runway is between 6,000-8,000 feet long; Lukla’s is only 1,700 feet long. It’s sloped upward to help slow the plane before it hits the solid rock wall waiting at the end of it. At the other end is a 2,000-foot drop. After landing safely, we were mesmerized watching the planes taking off for Kathmandu literally fly off the edge of a cliff.

Altitude sickness is also a concern, though if you work with an experienced guiding company as we did, they will ensure you climb up slowly to acclimatize. We had two layover days and hiked a far shorter distance each day than our bodies were capable of going. This itinerary helped us grow accustomed to the air as it grew thinner.

Hiking up slowly didn’t feel like a burden, though, as it allowed extra time to take in those jaw-dropping views. The higher I climbed, the more I felt like I could reach out and touch the shimmering, snow-capped peaks. The further we progressed, the more the mountains seemed to bend toward us, like we were inside of a snow globe.

At several points, we caught sight of Everest’s majestic peak peering out from behind its neighbors. Most of Everest lies in Tibet, but the peak is in Nepal. As such, the trek to Base Camp does not actually take place on Mount Everest, but inside Sagarmatha National Park — Sagarmatha being the Nepalese name for Everest.

Each day, as we made it a little higher, the air became a little thinner and our breath a little shorter. By day eight, the time between each step I took had grown significantly. I was breathing hard. My feet were dragging and my head pounding. I trudged slowly upward, but upward nonetheless, knowing the goal was within reach.

By mid-afternoon, we hiked across the final ridge and Base Camp came into view. We had made it to the gateway to the top of the world.

Base Camp rests on a massive glacier. I high-fived my group and took in the sight of dozens of yellow tents pitched across the ice, tents belonging to those preparing for their ascent. According to my trekking guide, the glacial terrain changes so rapidly that the expeditioners have to move their tents every two weeks.

We took pictures beside the sign declaring we were there and feasted on dark chocolate almond bark to celebrate. As the afternoon clouds rolled in, we lay back and watched the mountains disappear above our heads. The cheers and squeals of more trekkers arriving filled the air as it began to snow.

It may not have been the top, but it was nonetheless a spot where most people on the planet will never set foot. I feel so lucky to have stood in that very special place, and, as I always do at the end of a hike, I feel so strong knowing it was my own two feet that got me there.