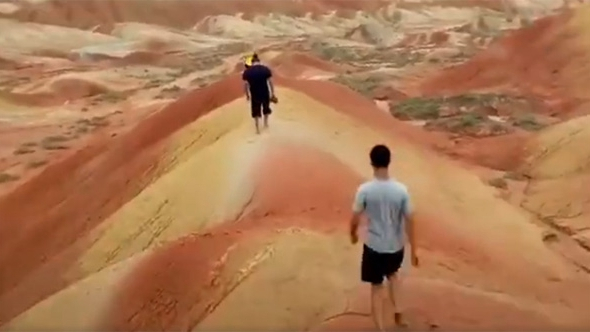 Video clips of three tourists trespassing into the national geographical park in northwest China and damaging the protected Danxia landform, which required nearly 60 years to be recovered once it was trampled, has triggered widespread criticisms on social media and raised the awareness of the protection of natural heritage in the country.

Two out of the four suspects, who were identified as Xu, 17, and Li, 20, had turned themselves in to the police while the identities of the rest were still being investigated, according to the local police on Tuesday.

The Danxia landform, which is most widely distributed in southwest, south and northwest China, is a kind of protected and precious landform in the world that consists of red rock formation with cliffs, which was formed 60 million years ago. The Danxia landform in China was listed as the UNESCO World Heritage site in 2010.

The two video clips of four tourists trespassing into the Danxia Landform Geological Park in Zhangye City, northwest China's Gansu Province, were first posted on Douyin, also known as Tik Tok, a popular short-video platform in China, by one of the suspect on Tuesday and began to circulate widely.

In one of the videos, two men and a woman could be seen walking on the red and yellow striped land, which is the valuable Danxia landform in the park. Posted along with the video, the description below said, "Important things should be emphasized twice: We didn't buy any tickets to enter this area and the scenery here was much better than the area where tickets were required."

In another video, a man bragged to the camera, saying: "I damaged the landform that was formed 6,000 years ago. We sneaked into the area and it feels so good."

Another suspect who filmed the video was seen trampling the land and kicking the sand with his bare foot.

After the video clips were widely circulated online, it immediately triggered widespread outrage as many netizens strongly criticized the tourists' offensive behaviors.

"These tourists has brought immeasurable losses to the geopark after they damaged the Danxia landform," commented a user @laotandianshang on Weibo, China's Twitter-like platform.

"That's brutal! It took tens of millions of years for the Danxia landform to be formed. I've already seen some immoral tourists damaging the landscape when I visited there several days ago and the local security couldn't eliminate such incidents by just warning them. I hope local authorities could increase the penalties!" commented another user @woshidapengsky on Weibo.

Local authority noticed the issue as soon as the video went viral and released an announcement on Tuesday, saying that an investigation was launched and efforts were being made to hunt the suspects, and a group of experts was called to detect the damage.

In the statement, the local authorities said constructors were called to check and repair the damaged guard rails in the geopark and security was increased in the area. A team of investigators had also entered the park to conduct a thorough check of the park's landscape and the management operation conditions.

Tourists are regularly being asked to protect the landform and respect the rules in the park through messages on digital screens in the area and other forums.

Investigators discovered that the four suspects didn't enter the geopark through an official entrance and the area they visited was not opened to the public, Yuan Deping, director of the geopark told Beijing News.

He added that the area was initially protected by the guard rails, however, some parts of the rails were discovered damaged.

Zhang Linglong, a staff member in the geopark, told Chinanews.cn that the region damaged by the tourists was the core area in the geopark, which had valuable landforms that were extremely delicate. He said that it takes nearly 60 years for the landform to fully recovered once a tourist left a footprint there, according to the geological expert.

Previously, the video clip of a female tourist crossing over the fence and posing for photos standing on the Danxia landform in the same geopark in northwest China had sparked widespread criticisms online. Since the woman didn’t buy her ticket using her real name, the local authority failed to blacklist her.