To celebrate the opening of the Fourth Oriental Economic Forum, Vladivostok set up a "Far East Street" to introduce guests to the charms of Russia on Sept. 11, 2018. 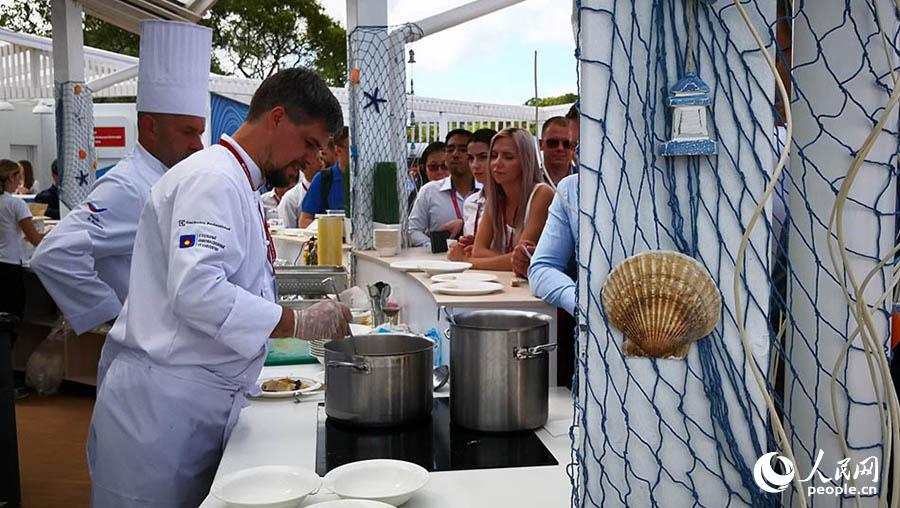 A chef prepares food at a stand in the street. (Photos: People’s Daily Online)

The street consisted of many themed stands, together with performances and local specialties. With the help of VR technology, the Ministry of Natural Resources and Environment allowed visitors to step into the Russian Far East.

The Federal Agency for Fishery invited a number of local chefs to cook for guests with local ingredients.

A Russian chef named Zhenya told People's Daily Online that he hopes that this will give Chinese visitors an opportunity to try Russian seafood dishes. He also hopes that one day, he will have the chance to cook for Chinese President Xi Jinping.

Passing by the Kamchatka Peninsula stand, visitors could enjoy folk dances performed by Russian minorities such as the Itelmen, Koriak and Chukchi.

President Xi’s visit to Russia will boost the economic development of both countries and strengthen people-to-people exchanges, said Sergei, who works for the cultural development of Kamchatka Peninsula and has performed in China.

A corner of the street.