TRAVEL Xinjiang to launch up to 100 trains for tourists

Xinjiang to launch up to 100 trains for tourists 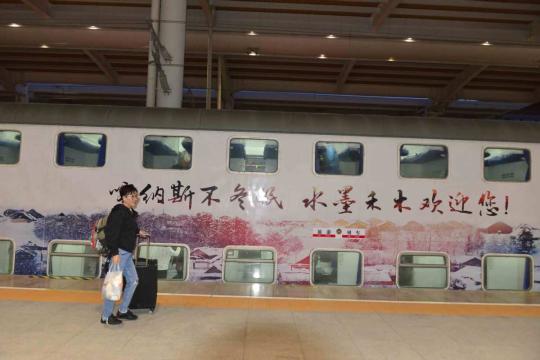 A passenger walks past a special train for tourists launched by railway authorities in Xinjiang. (Photo: chinadaily.com.cn)

As tours to Xinjiang Uygur autonomous region have become increasingly popular among tourists from home and abroad, local authorities have announced a plan recently to launch as many as 100 special trains for tourists from May to October.

The local railway authorities will step up cooperation with other parts of the country to boost Xinjiang's tourism development, according to Huang Tingfen, deputy general manager of Xinjiang Railway Tourism Development Group.

The trains will provide easier access to both the southern and northern parts of Xinjiang, said Huang. It will also be more convenient for Xinjiang residents to travel to other parts of the country.

Special trains connecting Xinjiang with major tourist areas such as the cities of Beijing, Dalian and Qingdao will be launched during the coming summer vacation, which usually spans June to August.

In the second half of the year, more trains for tourists will go into operation, linking the region to the Guangdong-Hong Kong-Macao Greater Bay Area, Guiyang city in Guizhou province, and Guilin city in Guangxi Zhuang autonomous region.

Huang said more services will be provided on a regular basis on the trains, including karaoke, dining, bathing and internet.