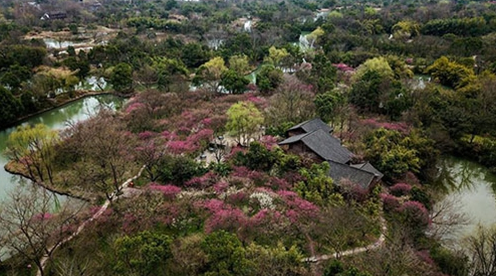 The Qingming Festival, also known as Tomb-Sweeping Day, falls on April 4 this year. On this day, Chinese people traditionally pay tribute to the deceased while many also take a short holiday trip during what is usually a three- to four-day weekend. The Xixi National Wetland Park, sometimes referred to as the Central Park of East China's Hangzhou, is all set for this holiday with the lightening of travel restrictions in the Chinese mainland.

The 10-square-kilometer park is located in the northwestern suburbs of Hangzhou. Boasting rare and endangered aquatic animals and plants, it became the country's first national wetland park in 2005.

The park gradually resumed business in late February to help cultural and tourism enterprises weather the COVID-19 outbreak. It is expected to be one of the most popular tourist sites during the Qingming Festival holiday, according to a report released on March 25 from China's e-commerce giant Alibaba's tourism platform fliggy.com.

While general admission usually costs 80 yuan ($11), entrance will be free until May 1, and will remain free to medical workers across the country throughout the rest of the year in a show of respect for their efforts fighting the pandemic. With a daily limit of 24,000 visitors, the park has also taken preventive measures such as requiring visitors to book tickets in advance with an ID, wear masks and pass through temperature checks.

The park is preparing to promote traditional culture while reviving tourism through a series of events such as martial arts and traditional Chinese music performances and live demonstrations of ancient Chinese kite making by an authorized intangible cultural heritage inheritor. The park's ongoing annual flower festival is also expected to be a big draw for tourists. Inspired by the ancient Huazhao Festival, which can be traced back to the Tang Dynasty (618-907), it is held in honor of the legendary flower goddess' birthday.

Setting up a national wetland park system was a pioneering step in China's wetland protection efforts. Such a level of protection didn't exist until 2004, when the General Office of the State Council issued instructions on protecting wetlands through the establishment of a  national wetland park system, a representative from the Wetlands Management Center of the National Forestry and Grassland Administration told the Global Times on Wednesday.

While establishing wetland nature reserves was a major method of conservation in the country, the wetland national parks, with their stricter measures of protection, are usually located closer to cities.

In October 2019, the Jack Ma Foundation donated 100 million yuan (about $14 million) for ecological research and protection of the Xixi National Wetland Park.

"Together with the world's top ecologists, we will build the Xixi Wetland into New York's Central Park," said Jack Ma, the retired co-founder of Alibaba, which has its headquarters in Hangzhou, at the donation ceremony.

Since the Xixi National Wetland Park's establishment in 2005, the number of national wetland parks in China has risen to nearly 900, including those that are in a five-year pilot stage.

"How to balance the protection and development of wetland has been a challenging question for industry insiders," said Lei Gang, chief scientist with the WWF (World Wildlife Fund) China Fresh Water Practice.

Looking back at the 15 years since China set up the first national wetland park, Lei noted that the country has established a relatively comprehensive wetland protection system. With policy, regulation and standards in place, the public awareness has been raised and society has been actively engaged in protecting the wetlands.

"[The country's experience and practice] can provide an important reference for international wetland protection, especially in densely populated and developing regions," he concluded.