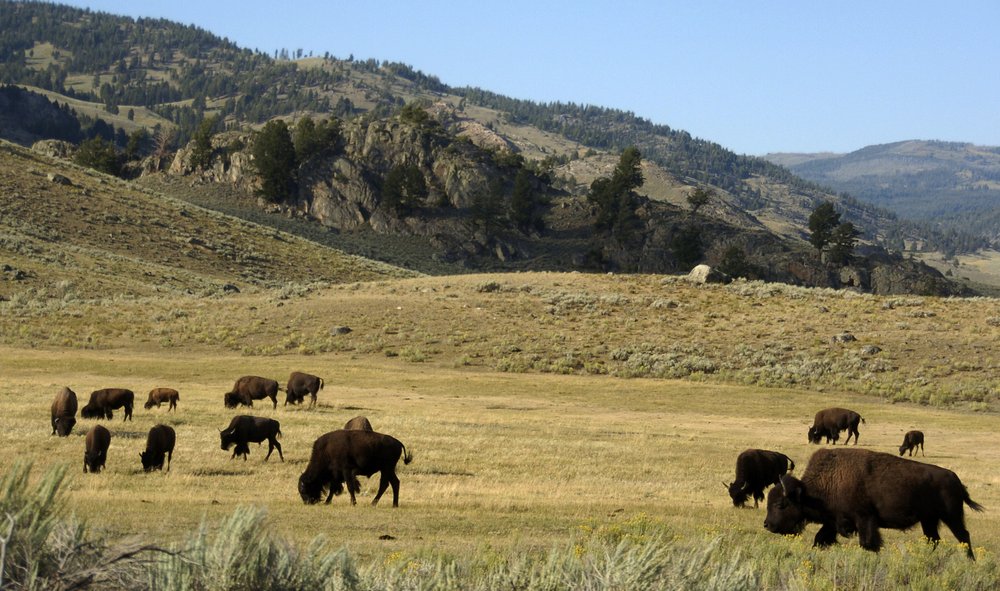 A herd of bison grazes in the Lamar Valley of Yellowstone National Park in Wyoming, on August 3, 2016. A study of grazing in Yellowstone National Park found that bison essentially mow and help fertilize their own grass. This allows allowing them to feed in one area for two to three months during the spring and summer. Researchers say they found that large numbers of bison grazing in one area stimulates the growth of nutritious grasses and keeps the area greener longer. (Photo: AP)

A study of grazing in Yellowstone National Park found that bison essentially mow and fertilize their own food. This allows them to graze in one area for two to three months during the spring and summer while other hoofed mammals must keep migrating to higher elevations to follow new plant growth.

Hundreds of bison grazing in an area stimulates the growth of nutritious grasses, in part because their waste acts as a fertilizer, according to research published this week in the Proceedings of the National Academy of Sciences.

“They add fertilizer through urinating and defecating, they drop nutrients back on the landscape, which are then available to plants,” Yellowstone scientist Chris Geremia said Wednesday.

“It’s almost like the bison become this giant fleet of lawnmowers moving back and forth across the landscape,” he said.

When more bison grazed an area more intensely, the area greened up earlier and faster and the grass stayed greener and had a higher nutritional quality for a much longer time, Geremia said.

Many other migratory animals in Yellowstone — pronghorn, bighorn sheep, mule deer and elk — do not form these large groups while they migrate and graze, Geremia said.

“Bison don’t just move to find food, kind of the classic way that we think of animal migration,” Geremia said, “but they create good food by how they move and how they graze.”

From 2012 to 2017, researchers fenced off plots of grass along bison migration corridors and compared them to the grazed areas.

“The data showed that grasses heavily grazed by bison were more productive compared to exclosures where bison were not allowed to graze,” said Matthew Kauffman, unit leader of the U.S. Geological Survey’s Wyoming Cooperative Fish and Wildlife Research Unit at the University of Wyoming. “The mowed-down forage had higher ratios of nitrogen to carbon, a standard measure of nutritional quality.”

Trampling and nibbling by the bison kept the plants shorter and denser and forced the plants to keep growing, giving the bison a steady supply of fresh, nutritious grass.

“During most of May and June and part of July ... they are grouped together repeatedly grazing the same area,” Geremia said.

Bison “are not just moving to find the best food; they are creating the best food,” said Jerod Merkle, a professor in migration ecology and conservation at the University of Wyoming. “This happens because bison are aggregate grazers that graze in groups of hundreds or more than a thousand animals.”

While the effect of aggregate grazers was known on a small scale, sensors on NASA satellites can detect how grassland dynamics differ between areas that are lightly or heavily grazed by bison, the research showed.

“Our work shows that bison are capable ecosystem engineers, able to modify grasslands in a way that enhances their own grazing,” said Mark Hebblewhite, professor of ungulate habitat ecology at the University of Montana.

The research could bolster efforts to rebuild herds of bison around the West, including in Banff National Park in Alberta, Canada, and on the Blackfeet Indian Reservation in northern Montana, Hebblewhite said. 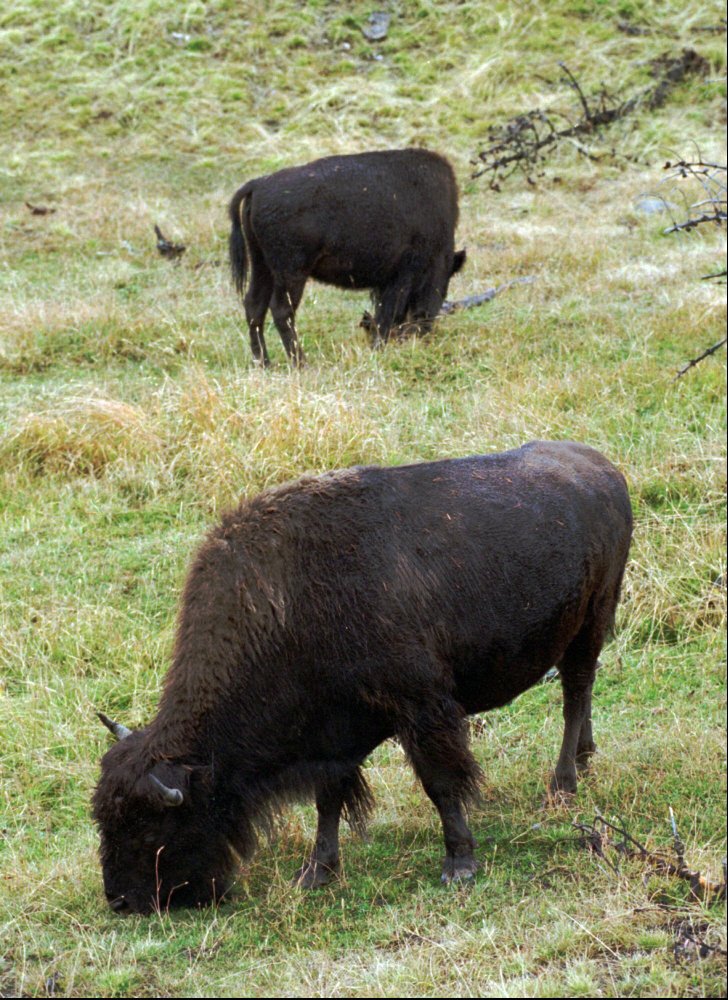 Two bison graze in a meadow in Yellowstone National Park, Wyoming on October 5, 1994. New research shows when bison heavily graze an area, the grass greens up earlier and faster and stays green for a much longer period of time. Researchers with the park and area universities say the bison are able to graze in one area for two to three months rather than having to move to higher elevations to follow new plant growth. Sensors on NASA satellites are able to observe the grassland dynamics.  (Photo: AP)