Thousands of people dressed in white flocked to Mexico's ancient pyramids Thursday, seeking to soak up the rays of the spring equinox sun in body and spirit. 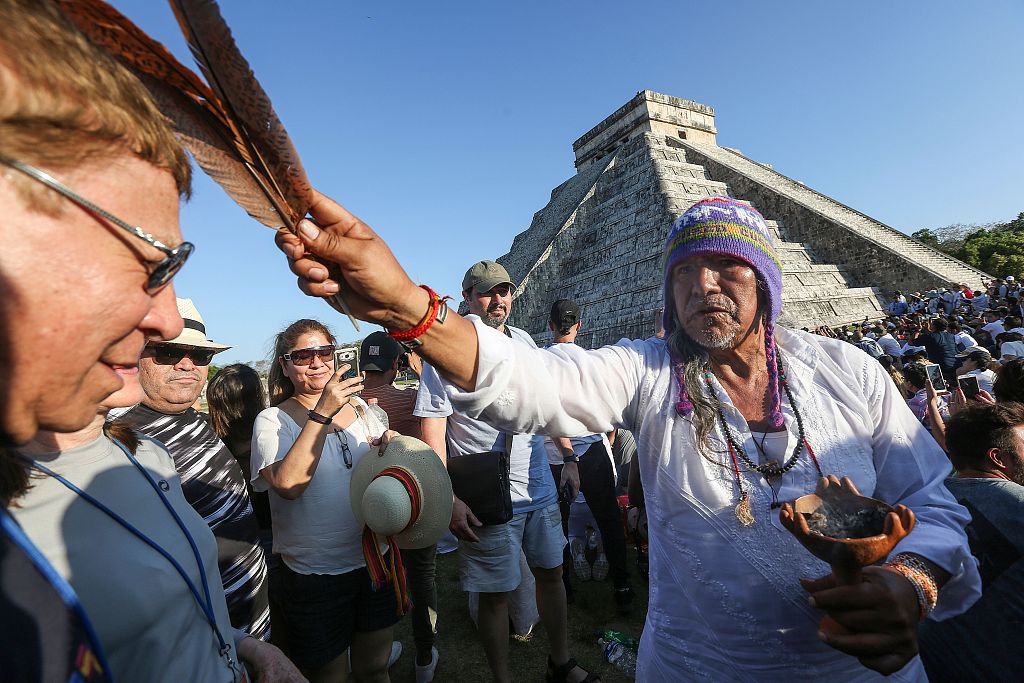 People surround the Kukulcan Pyramid as a shaman performs a ritual at the Mayan archaeological site of Chichen Itza in Yucatan State, Mexico, during the celebration of the spring equinox on March 21, 2019. (Photo: VCG)

The equinox held special significance for many of Mexico's pre-Columbian peoples, who built their architecture around it in some cases.

Famous examples include the Mayan pyramid of Kukulkan, in the ancient city of Chichen Itza, where at the moment of the equinox, the sun's rays generate a shadow of seven triangles that look like a serpent descending the stairs.

Also on the Yucatan peninsula, at the Temple of the Seven Dolls in Dzibilchaltun, the sun aligns precisely with a pair of east- and west-facing doors this time each year, illuminating the structure with a burst of light.

Dressed in traditional indigenous garb, dancers performed ceremonies at these and other sites, including the nearly 2,000-year-old sun pyramid of Teotihuacan, near Mexico City.

Such ancient customs have mingled with New Age spirituality to draw white-clad visitors from around the world seeking to recharge their energy with the rays of the spring sun.

Others are simply seeking the perfect selfie atop the stunning pyramids.

"'Teotihuacan' means 'the place where men become gods,' so we're here to steal a little bit of its energy," said Alfonso Martinez, 53, a Mexican man who had traveled from the eastern state of Veracruz.

"As human beings, we are energy, and I agree that we can charge ourselves with energy," added Erick Gonzalez, a 37-year-old nurse.