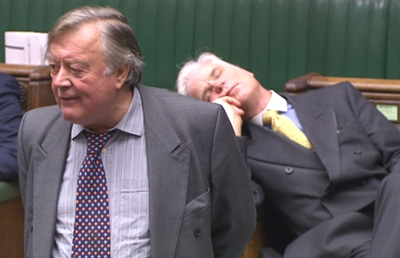 British lawmaker Desmond Swayne appeared to fall asleep during the Brexit debate in the House of Commons on Tuesday.

As Conservative politician Ken Clarke was giving a major speech on the EU Withdrawal Bill, Swayne leaned his head to the side, closed his eyes and appeared to nod off.

After Clarke raised his voice when talking about the Charter for Fundamental Rights, Swayne jolted back, rested his head in his hand and smiled.

As the debate continued in the British parliament, leaders of the European Union institutions weighed into a new British debate on whether to hold a second referendum on Brexit by saying on Tuesday that Britons would be welcome to stay in the EU.