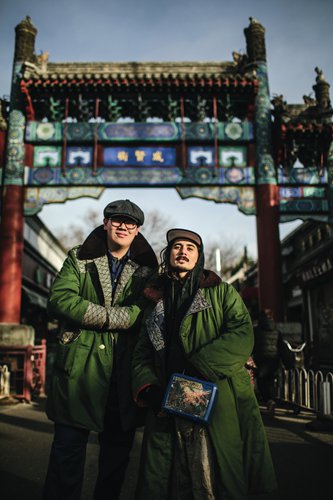 As many Chinese customers seek out down jackets made by expensive foreign brands, Benjamin Heisler from the US, who goes by the Chinese name Qiuzhang (the chief of his tribe), set his eyes on one of China's very own productions - the Chinese military coat.

Qiuzhang has been living in China for 13 years, and as soon as he experienced his first winter, he bought a Chinese military coat and has been wearing the coat ever since.

"I like to collect things related to the military; I am also a fan of vintage clothes, so I must have a Chinese military coat while I am in China," Qiuzhang said.

"I think it's a shame that many young Chinese turn their backs on the Chinese military coat when it's not only practical but also quite original and fashionable and has unique historical value."

Although the Chinese military coat seems like an outdated and rustic choice for many, some foreigners in China and young Chinese are starting to see the value of the trend, which combines vintage fashion with practical values and historical sentiment.

If you search "Chinese military coat" on Taobao, you will find over 100 stores offering the product, with sales volumes ranging from hundreds to thousands.

However, most of them are imitations and not actually produced by the army. The Chinese military coat has also made its way to Chinese celebrities and the big screen recently.

Leah Dou, a young singer and the daughter of the famous diva Faye Wong, recently wore a Chinese military coat and the matching Lei Feng hat for her performance at the New Year countdown show hosted by Beijing Satellite TV. Net users applauded Dou's clothing choice as original and down to the earth. The recently launched movie Youth (2017) directed by Feng Xiaogang also brought people's memory back to performance troupes in the military and sparked people's nostalgic feelings toward military style. 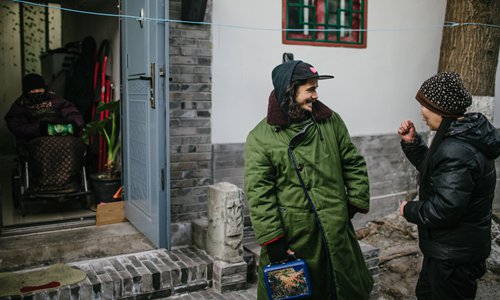 Qiuzhang talks with his neighbor in the hutong he lives in. Photo: Li Hao/GT

Qiuzhang believes that the Chinese military coat is more original than a down jacket.

"When I walk down the street in Beijing, I see a lot of people (from young to old) wearing the same down jacket," Qiuzhang said.

"I don't see many people wearing Chinese military coats on the street. Besides, you can customize the jacket and add your own style like I did."

He expresses his individuality by customizing his Chinese military coat and putting his own twist on the classic design. By incorporating patches and materials such as paisley-patterned cloth on the collar section and adding images he created on the back lining of the jacket, a sharp contrast is made with the green military coat and the added embellishments.

Wang customized his Chinese military coat by adding a fish scale patterned cloth to the interior, collar, cuffs, pockets and front of the jacket. "That pattern is from a Japanese style of art called Ukiyo-e, which I believe originated in the Tang Dynasty (618-907). I love the Tang Dynasty culture," Wang said.

Having studied painting since he could hold a pen, Wang specializes in watercolor painting and illustration and facsimiled many paintings from the late Tang Dynasty and Japanese Ukiyo-e.

"By adding fish-scale patterns to the clothing, it takes away the military label and makes the jacket reflect me because after all, I am not in the military," he said.

"If we went back to the 1960s, the Chinese military coat would be our battle armor," Wang laughed.

When Wang was a little kid, he always dreamed of joining the army to become a soldier. By wearing the Chinese military coat, it is like a dream come true.

"I know that some young people think the Chinese military coat is not fashionable, but fashion is about how you feel about yourself when you put the clothes on your back, and how you create your own style," Qiuzhang said.

If you know how to mix and match clothes to reflect who you are, you can transform a Chinese military coat into something that is not only fashionable but speaks your own temperament but if you can't, even a million bucks worth of clothes won't work, he said.

"I see many Chinese people wearing Canada Goose down jackets, but in my opinion, they are not as good quality or as practical as the Chinese military coat," Qiuzhang said.

According to Qiuzhang, it is warmer than any down jacket made by expensive brands.

Ten years ago, Qiuzhang put up a stall in a park during a Chinese temple fair. It was winter, and he was working outside at the fair eight hours a day.

"No jacket of any kind could save me from the biting cold except my Chinese military coat," Qiuzhang said.

"It's long and covers my entire body. It can shield the wind better than anything, and it's large with many pockets, some of which I added myself in the inside, so I can put my thermos in it and have a sip of hot water any time I want. I don't think any other coats can do that," he said, laughing while leaning on a hutong wall as he reached into his jacket and pulled out his thermos on a cold winter afternoon.

Being warm was not the only reward Qiuzhang got from wearing a Chinese military coat at the fair; he caught the attention of many people and was photographed for the cover of the Beijing Morning's Post.

As an American who has a passion for living like a real local Beijinger, Qiuzhang lives in a Beijing hutong and according to him, the Chinese military coat is a must-have to live an authentic hutong life.

"When I get up in the morning with my pajamas and go to the public toilet, I can just throw the military coat over my shoulders and go to the bathroom; it keeps my entire body warm," Qiuzhang said. "I can greet my neighborhood Daye (local seniors), and we compliment each other's Chinese military coats."

"The Chinese military coat originated from the Chinese army, and I believe its quality represents our country's best and highest standards at the time. I trust our country's military productions," Wang said.

Wang's love for the Chinese military coat is also derived from practical uses. When Wang paints, he sometimes gets propylene, a strong chemical found in his painting products, on his clothes, leaving the clothes burned and ruined.

"The military coat will not be affected by that," he said. "I even tried to burn the coat once, but the real military coats made by the Chinese army are non-flammable."

"The quality is great, and it's more durable than other clothes. It has an anti-static lining, since static is a huge problem, and most winter coats don't have that," Li said.

Military coats are not only confined to the army or a small number of fans, but have extended to the runway and inspired classic clothing designs, allowing common citizens to adorn the military's valiant and heroic looks.

"When I buy a woolen overcoat or dust coat, I like to buy the military green ones because it gives me a more handsome and military-like look," Li said. "I also like to buy camouflage t-shirts and shorts in the summer."

"I like military-style clothes the best. It's a combination of street culture and military culture, which is even more suitable for me," Qiuzhang said.