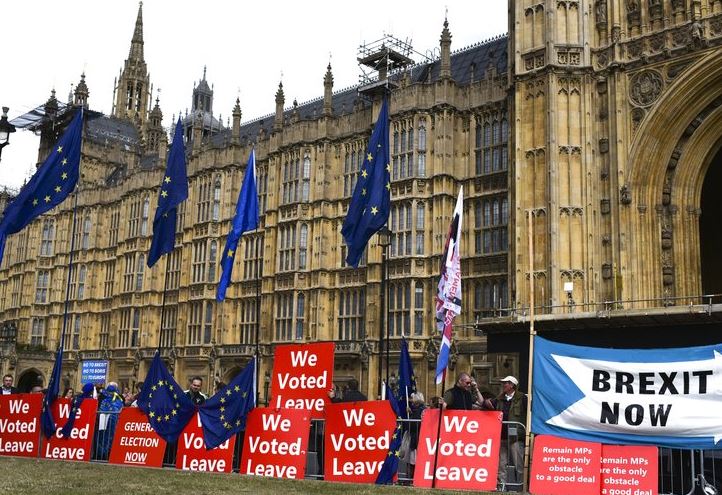 LONDON, Sept. 6 (Xinhua) -- The British House of Lords on Friday approved a bill designed to block a possible no-deal Brexit, paving the way for it to become law.

The European Union (Withdrawal) (No. 6) Bill passed un-amended in the House of Lords. It now requires royal assent before it becomes legislation.

The bill was passed on Wednesday in its final reading in the House of Commons by 327 votes to 299. It means the British government has to extend the Brexit deadline beyond Oct. 31, if a deal has not been agreed with the EU by then.

After Tory members in the Lords tabled a vast number of amendments, there were fears that Eurosceptic peers could have talked out -- or filibustered -- the bill and that voting would last so long that it would not be finalized before the parliament is prorogued next week.

But the British government's chief whip in the Upper House, Lord Hyde, later announced that the Lords would finish on Friday and return it to the House of Commons.

The bill is designed to force Prime Minister Boris Johnson to ask the European Union (EU) for the Brexit deadline to be extended beyond Oct. 31 if no deal is agreed by London and Brussels by Oct. 19.

Johnson had vowed to take his country out of the EU on Oct. 31 with or without a deal, and he said that there are "no circumstances" in which he will ask Brussels for "another pointless delay" of Brexit.

Also on Friday, opposition leaders agreed to vote against or abstain from a second call for a general election in the House of Commons on Monday.

In the past several days, Johnson has suffered several defeats over Brexit in parliament, expelled 21 of his own MPs for rebelling and seen his younger brother, Jo Johnson, resign from government.

Johnson's decision to prorogue -- suspend -- parliament next week ahead of a Queen's Speech on Oct. 14 is also being challenged in the courts in Scotland and Northern Ireland.